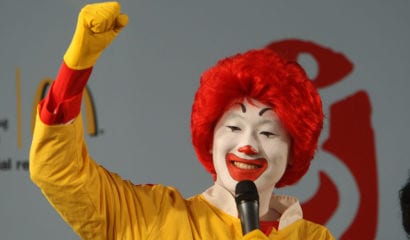 Fast-food workers across America — or at least across the island of Manhattan that media outlets often confuse for America — have been partaking in lunchtime strikes. My lunchtime strike against fast food started long before the workers’ industrial action did. When I want a hangover, I prefer Budweiser to Burger King. Like fast women or fast money, fast food leaves one with an empty feeling. The appetite craves most what satiates it least.

A commenter on the Freakonomics website recently claimed that the McDonald’s Double Cheeseburger is “the cheapest, most nutritious, and bountiful food that has ever existed in human history.” In other words, it provides its eaters with more bang for their buck and feeds people who might otherwise go hungry. It makes you think. It doesn’t make you eat. People may say the Double Cheeseburger is cheap and bountiful. Nobody says that the Hamburglar or Mayor McCheese makes the most delicious food in human history.

The striking workers want $15 an hour. The median hourly wage for fast-food workers is $9.05. Some make less than half of the wage the strikers seek. But when worker commitment to a strike lasts a lunch break, corporate commitment to meeting their demands will likely prove as half-hearted. Workers who don’t have the time to strike must suffer with bosses who won’t find the money to end the passable impasse.

“Fast food workers are fighting back, in just cause,” the New York Times editorializes. But one can’t help but think that fast-food eaters will fight back in just cause if the workers get their way. The low pay seems intrinsically related to the cheap deals. Doubling the wages may lead to doubling the prices. Will customers accustomed to paying $1.99 for the Wendy’s Double Stack double their donation to $3.98? Fast food’s main appeal is not its quick delivery, but its price.

That’s the main appeal of the workers, too. Ronald McDonald doesn’t hire them for their financial wizardry, computer skills, or ability to craft a sentence. He hires them because they come cheap. He’s no clown when it comes to cash. And the workers accept the job because they don’t yet possess the skills to command a better wage.

Still, working at Taco Bell can be as unsatisfying as eating there. Low-wage jobs may become more plentiful. That doesn’t mean they will become more profitable. It’s quite the opposite. In a struggling economy, those struggling most possess less leverage, not more.

In local food factories, some of the assembly-line laborers appear barely legal; their working papers say they can toil but their baby faces beg to differ. Others can’t speak the native language. Others can but liberally pepper their dialogue with words that start with “f” and “n.” And even the workers who are at the beginning rather than the end of the line aren’t exactly a deal for employers. They view their jobs as a means rather than an end. When they improve their lot, they’ll prove as unsentimental about dumping their employer as their employer now is about paying them a pittance.

Milton Friedman, who made a sub-minimum wage living waiting tables in exchange for a lunch as a Rutgers student, understood unnatural tinkering with the laws of supply and demand as a surefire way to hurt minorities, immigrants, and teens. Rather than giving poor workers more money, government dictates to employers to pay higher wages would more likely give poor workers fewer jobs. The profit margin in restaurants — ever notice how stingy they are with napkins and ketchup? — runs so small that workers go out the door when costs go through the roof. Friedman noted in his long-running Newsweek column, “The true minimum wage rate is zero — the rate an unemployed person receives from his nonexistent employer.” That’s surely now the wage of many Detroit autoworkers who had once celebrated unsustainable wage hikes gained through labor stoppages.

A worker who truly deserves higher pay creates a résumé, not a ruckus. Instead of leaving Burger King for an hour, why not leave for good if you deserve more money? Surely someone besides yourself, preferably an employer and not your mother, will similarly assess your true value. If that fails, by all means, strike.