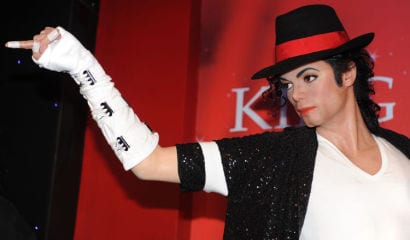 I recently spoke to a football player who found himself within Michael Jackson’s orbit when the star shined like a supernova during the 1980s. His sweet tooth needing a sugar fix late one night, the athlete was directed to a giant room at Neverland that appeared as a candy store of the type one occasionally stumbles upon in shopping malls but never in homes. Inside, the King of Pop housed a life-sized bubble-gum statue of himself.

Michael Jackson was made of soft stuff.

A child may dream of Willie Wonka-style accommodations. No adult does.

Whatever judgment the court issues in Jackson v. AEG, the court of public opinion’s verdict is already in: Michael Jackson was fifty going on five.

Those closest to him inadvertently affirm this. “Michael had a very low pain tolerance, and his fear of pain was incredible,” wife Debbie Rowe testified. “And I think the doctors took advantage of him that way.”

Brother Randy shed light on that time in 2005 when Jackson appeared to court late, disoriented, and wearing a sport coat and pajamas. Instead of facing the music, Jackson had tried to play hooky. “I went to the hospital and he said to me, ‘I don’t know what you’re thinking. I’m not walking into that courtroom, so don’t even think about it, Randy.’” A “bad back,” the excuse peddled at the time, didn’t cause the trial tardiness. Jackson showed up late “because he didn’t want to go to court,” arriving only after the judge threatened to revoke bail.

Denied a childhood, the King of Pop refused adulthood. The amusement park, the private zoo, and especially the playmates — Emmanuel Lewis, Macaulay Culkin, Corey Feldman. etc. — all screamed arrested development; the drug use, all the more so. His psychological tic manifested itself in his physiognomy, medically altered to make his masculine features more delicate. Like most kids, he spent money without a thought to whether he could afford to. Manhood proved so foreign to him that he even outsourced the siring of his children.

Michael Jackson’s heirs have inherited his dodge of personal responsibility in their case against concert promoter AEG. They couldn’t shake him from drugs or persuade him to go to an expensive rehab instead of on a profitable tour. Why do they think that capitalists with financial rather than blood ties to the singer should have done better by Jackson than they did? Whether or not AEG bankrolled Jackson’s personal physician since convicted of involuntary manslaughter — whose relationship with Jackson prefaced AEG’s — seems to miss the larger principle that people owe themselves more than what others do.

So many other stars have succumbed to chemical escapism that by the time Jackson made his permanent escape the entertainer original in so many ways had become a cliché. Where Jackson’s death differs from those of Kurt Cobain, Keith Moon, Elvis Presley, Jimi Hendrix, and countless others is the hubris with which those closest to him accuse others of what Jackson himself did.

Jim Morrison’s relatives didn’t sue the bathtub manufacturer. John Bonham’s inheritors didn’t take the vodka industry to court. Michael Jackson’s mother and kids sue a concert promoter that advanced the singer $30 million that they may never see again. Michael Jackson may have ruled pop, we are supposed to believe, but he didn’t rule himself.

What did MJ see when he looked at the man in the mirror? Surely, he didn’t heed the advice he rhapsodized by changing his ways. It’s likely that he didn’t even see a man, just a Peter Pan figure who wished to forever live as a child in his Neverland. That’s the stuff of fairy tales, not real life.