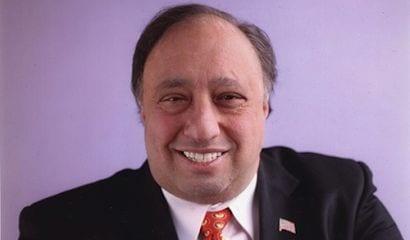 To call the New York mayoral election a circus is to insult any number of fine, well-credentialed clowns, ringleaders, human cannonballs, and zoo animals. Most of the media’s attention has been sucked up by Anthony Weiner’s latest sexscapades. But other contenders for the Gotham crown include a city council president who has threatened to slice off men’s private parts when she doesn’t get her way and a former Obama czar once investigated for allegedly obtaining a sweetheart deal for a balcony on his new home.

Those are the Democrats. And while it seems likely that New York’s next mayor will be selected from among them, its past two mayors have both been from the GOP. Republicans have a strong contender this time too, though he hasn’t been getting much attention, overshadowed by Anthony Weiner’s legendary crotch.

His name is John Catsimatidis. The sun of a busboy, he grew up in Harlem and started a small grocery store in Manhattan. Today he’s the CEO of Red Apple Group, a company that distributes fuel, leases aircraft, and owns Gristede’s Foods, a major New York grocery chain. Jolly and jowly, Catsimatidis is now a billionaire — the 132nd richest man in America, if we’re being exact — but still speaks with a strong New York accent and a vox populi edge. His office is in a Manhattan grocery warehouse. If elected, he’s pledged to take a salary of 99 cents.

Not surprisingly, Catsimatidis is insistent that as mayor he’ll make New York friendlier to private companies. He has a detailed plan to boost small business growth, which includes cutting through the city’s red tape of permits and regulations, along with a hodgepodge of tax credits, incentives, and new loan programs. He also wants to host a third World’s Fair — something New York City hasn’t done since 1964 — to spur economic development.

Catsimatidis has made continuing the largely successful Giuliani-Bloomberg record on crime a major theme of his campaign. He’s supportive of Bloomberg’s stop-and-frisk policy and condemned last week’s court decision that struck it down. He’s said he’ll keep Ray Kelly, New York’s bullish and controversial chief of police, on the job. He ran an ad accusing Democratic frontrunner Christine Quinn of wanting to “silence our police,” which he called a “dumb idea.”

Crime might seem like a mothballed issue. New York, after all, has come a long way since its Bonfire of the Vanities days. Mayor Bloomberg recently claimed that the Big Apple is the “safest big city in America” and Giuliani’s efforts to fight crime are largely considered a success even by many Democrats. Still, the city’s crime-riddled past remains fresh in the minds of many New Yorkers, for whom a return to the days of David Dinkins is akin to zipping back in time to the Cretaceous Era right before the asteroid hit. Republicans have a serious record of fighting crime in New York, and with issues like stop-and-frisk back in the headlines, Catsimatidis has an opening.

And while Catsimatidis praises Bloomberg’s record on law enforcement, he’s more critical of the mayor’s health-policing policies, or as they’re more commonly called, New York’s encroaching nanny state. In particular, he’s blasted Bloomberg’s prohibition on supersized sodas, telling the Daily Beast, “I would not enforce it, or I would repeal it, or whatever. But I would put a regulation in our education system so that kids are taught better nutrition.” Catsimatidis has said that he supports Bloomberg’s ban on trans fats, though he struck a more moderate tone in a candidates debate, arguing that it was best to educate people about threats to their health rather than resort to prohibition.

Catsimatidis’s main foe in that debate was Joe Lhota, a former deputy mayor to Rudy Giuliani and former head of the MTA. Lhota is generally regarded as a manager and a technocrat; the mayoral race is his first time in the limelight. The two play their parts very well. Catsimatidis, the outsider, is colorful and rumpled; Lhota, the establishmentarian, is more reserved. They found common ground on the dais, praising Bloomberg’s record of accomplishment. But offstage the fight has been far more explosive, with Lhota saying he hasn’t heard a single rationale why anyone would vote for Catsimatidis, and Catsimatidis relentlessly blasting Lhota for raising fares at the MTA and threatening to drop “nuclear bombs” if his opponent goes negative.

The race is still largely up in the air. A Quinnipiac poll released on August 14 found Lhota leading Catsimatidis by six points, a significant gain for Catsimatidis, but one that was within the gaping 9.4 percent margin of error. The primary election isn’t until September 10, but it’s clear much of the momentum and excitement is currently at Catsimatidis’s back.

Whether he can keep that energy up until the general election remains to be seen. New York, after all, is still one of the most liberal cities in America and generally hostile to Republicans. Still, Catsimatidis’s candidacy should give conservatives something to root for in the mayoral race — other than another month of mocking Anthony Weiner, of course.