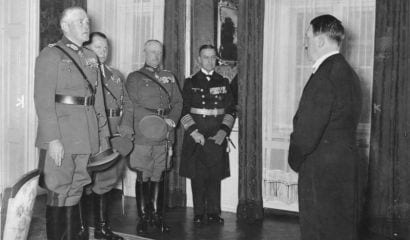 I don’t often agree with a top Egyptian diplomat, but I thought Egypt’s ambassador to the United Kingdom, Ashraf el-Kholy, was right on target when he compared Egypt’s Moslem Brotherhood to the Nazis. As he told the Telegraph on August 19:

Fortunately the Egyptian army did not emulate the pre-World War II German army, which failed to overthrow Hitler after he came to power through democratic elections in 1933. Although the army was led by traditional conservatives who regarded Hitler and his Nazi thugs as little more than proletarian riff-raff, they continued to support him, even as it became increasingly clear that he was bent on dragging Germany into a potentially ruinous war.

Why did Germany’s generals fail to mount an anti-Hitler coup? After the war, German officers cited their oath of loyalty to Hitler, but that, I think, was a relatively minor reason. A more compelling consideration was that Hitler was immensely popular with the German people — a political rock-star of sorts — and that overthrowing him would lead to massive protests and considerable bloodshed. The German generals didn’t want to have rivers of German blood on their hands.

Another reason the generals didn’t act is that they couldn’t take the loyalty of the German army for granted. Germany’s senior officers might have despised Hitler, but junior officers idolized him. Would they obey orders to overthrow him, and turn their guns against his enraged civilian supporters? The generals weren’t sure.

For all these reasons the generals, despite their reservations, went along with Hitler, and the fact that — initially, at least — he went from one successful gamble to another appeared to justify their judgment. In the long run, however, the army’s failure to act brought about the most terrible war the world has ever seen.

But as I said, the Egyptian army didn’t follow Germany’s example. It overthrew Morsi knowing full well that far from meekly vanishing from the stage, the Moslem Brotherhood would never accept such a “humiliation,” and that the army would have to act forcefully and violently against Brotherhood supporters. I assume Egypt’s generals also recognized that the Muslim Brotherhood enjoys significant support among the army’s junior officers. After all, it was an Islamist army cell, led by Lt. Khalid Istambouli, that assassinated Egyptian President el-Anwar Sadat in 1981.

Nonetheless, the army decided that preventing Morsi from completing his Islamicization of Egyptian society justified their coup. It was a brave decision, and it has already transformed the politics of the region. Before the coup, it seemed that the spread of Islamist radicalism was irreversible. Today, that’s no longer the case. As the Chinese might say, the Islamists no longer enjoy “the mandate of heaven.”

It’s probably too much to expected to expect the Obama administration — and the American political class in general — to understand the stakes in the Middle East, to recognize that Egyptian politics (like Arab politics in general) is a zero-sum game in which compromise is despised, and to give Egypt’s generals the support they need and deserve.

But of all people, the Germans should know better. That’s why I was surprised by Germany’s decision to suspend arms exports to Egypt. Germany’s Foreign Minister Guido Westerwelle justified the suspension by saying that there must be “consequences” to the bloody military crackdown. But in this wicked world of ours, there are also consequences to the military’s not cracking down bloodily, and it is a foolish person indeed who assumes that inaction is invariably the wisest course.