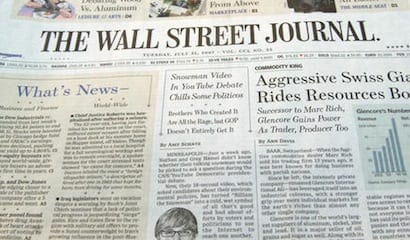 The research, structure, and ideas from the article that my book’s publisher had pitched and that Wall Street Journal “Weekend Review” editor Gary Rosen had asked me to write in late spring strangely reappear throughout Max Boot’s “In Defense of Football” piece, which ran in the section of the Journal edited by Rosen.

Given that the New York Post had published an edited version of what I had submitted to the Journal, and that it appeared a day after Max Boot’s piece and under the very same “In Defense of Football” title, the Journal has put me in a terrible position. To some, it would seem as though I had cribbed from Boot’s piece rather than the reverse.

For five straight paragraphs, Boot’s piece relies on the same examples I used in my submission. Beyond this, Boot uses these identical examples in the precise order I had employed in my piece considered by editor Gary Rosen almost three weeks earlier.

The structural similarities start with a sentence on chronic traumatic encephalopathy followed by another one on Junior Seau, Dave Duerson, and other players who have taken their own lives. The articles then transition into highlighting the reaction to these tragedies, referencing attempts by school board members to ban the game. Readers of the articles see the same seven-month-old quote by the president reflecting his reservations over allowing a son to play if he had one. Immediately after the Obama quote, both articles discuss the decline in participation in youth football. References to Malcolm Gladwell’s call for educational institutions to pull the plug on the sport follow. I quote him. Boot summarizes. My Post article then notes, “About 4 million Americans play tackle football, most of them young people.” Boot similarly notes that the sport boasts “1.1 million players in high school and about 2.8 million players in youth leagues.”

The Journal piece mirrors the order but rewrites the words. My passage noting tackle football’s total player population originally appeared deeper into the article before its edit by the Post. But this doesn’t change the fact that, whether one contrasts Boot’s article to the one I submitted to Gary Rosen or the version published in the Post, the aforementioned string of facts, phenomena, quotes, and controversies appear in the same progression in both articles. It’s eerie enough that both articles use the exact same set of facts to illustrate the same points. That Boot, in such a condensed space, presents these facts in the exact chain as I do makes any pretension of coincidence difficult to believe. The same goes for the article’s seeming appropriation of another writer’s work.

A study of more than 2,500 retired NFL players found that those who had at least three concussions during their careers had triple the risk of clinical depression as those who had no concussions.

Less alarming but still concerning is a 2007 study of 2,500 retired NFL players by the University of North Carolina’s Center for the Study of Retired Athletes, which found that those who had at least three concussions were at triple the risk of getting clinical depression as those with no concussions.

Was this a coincidence, too?

Boot’s sentence commandeers more than two-dozen words all in the same order from McConnaughey’s sentence. He inserts the outfit conducting the study and the year the group conducted it, but beyond that it’s lifted from an AP piece readily available online. It wouldn’t have required much effort on Boot’s part to write in his own voice. So, the more egregious bit of expropriation involves taking the research another writer has done, rather than merely her words, to convey the sense that Max Boot came to these conclusions by reading the study itself rather than by reading the lead of an old AP item.

Just as research for an earlier AP article made its way into Boot’s piece, studies cited in the material I presented to Rosen in July somehow wound up cited in Boot’s piece, too. In the first rejected effort for Rosen, I debunked the myth that NFL players kill themselves at six times the national rate. Boot does too. In the second draft, the one eventually published by the Post, I focus on a National Institute for Occupational Safety and Health’s 2012 study to convey decreased mortality rates for retired NFL players. Boot does too. This is peculiar but not, especially outside of the context of the many other borrowings, evidence of copying. The NIOSH study, after all, is available online. But when Boot mines an enormous report elsewhere to use the data points I use to make the same argument I make, the likeness is uncanny.

In my Post piece, I write that “football hits killed 36 players in 1968. In the last decade, total fatalities from contact have averaged 3.7 per year.” Boot writes that between 2002 and 2012 “there were an average of 3.8 fatalities a year directly attributable to football”—his math is off—and later in the article he writes that “36 players perished in 1968 alone.” There are literally millions of data points that could have been pulled from the statistics compiled on football fatalities since 1931. For instance, in an article at Forbes, I respond to Hall of Famer Lem Barney’s claim that the game is deadlier than ever by contrasting collision deaths at all levels of competition during his eleven-year NFL career with such fatalities during the last eleven seasons. In another piece in the Chicago Tribune, I contrast data on youth and high school football collision fatalities during Bears-great Steve “Mongo” McMichael’s years at those levels (9 to 26 deaths) with the absence of a collision death at those levels last season. Amid so many possibilities Boot chose to note 1968’s 36 football deaths and the recent average of less than four collision deaths annually—just like I did in my piece.

Other common denominators appear. And parts of Boot’s article certainly have nothing to do with what’s presented in The War on Football or in the material requested of me by the Wall Street Journal. But it’s hard to escape the painful conclusion that I spent my summer unwittingly serving as the unpaid research assistant to a man I know only through reading one of his books. What’s worse, the presentation of my ideas, article structure, and research without attribution in an article published a day before my own piece creates in readers’ minds an unfavorable, damaging impression of my character.

The Journal stands above the other newspapers in the United States in circulation because it stands on the shoulders of its past and present giants. The original commentary of Peggy Noonan, the intrepid example of reporter Daniel Pearl, the dogged pursuit of justice for the reviled but innocent by Dorothy Rabinowitz, and the intellectual heft of towering newspaperman Robert Bartley all served to habituate me, and so many others, to the Wall Street Journal. The paper, its readers, and the journalists toiling to consistently put out a great product deserved better than they got here.

When I confronted Mr. Rosen with the similarities between my rejected piece and Boot’s published piece, he claimed that Boot had never read my article. If that’s the case, perhaps Boot has been the victim of editorial misconduct or maybe there is some other explanation for the mountain of similarities. Coincidence, though, isn’t an explanation but an excuse.