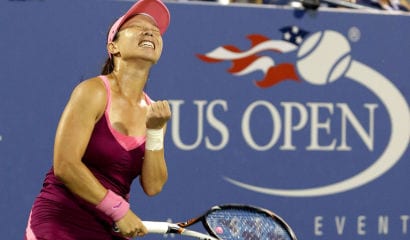 More Politics
Sign up to receive our latest updates!
Register
Hot Off
The Press
Blog
Notre Dame Sells Tarot Cards and Witchcraft Guides
by Ellie Gardey
Laughing Matters
Give Me a Break: The Washington Post Decides the Recession Is Good for You
by Itxu Díaz
The Talkies
Olivia Wilde’s New Movie Takes Aim at Jordan Peterson — And Destroys Itself
by Michael Shindler
Political Hay
New Video Confirms That Democrats Invented Election Denial
by Deroy Murdock
The Current Crisis
Why Is Putin’s Army Inept?
by R. Emmett Tyrrell, Jr.

Agnieszka Radwanska seems almost languid as she approaches a low-bouncing ball that her opponent sliced over the net from the back court, hoping to catch her far enough back to end the baseline rally. The ranking Polish player, seeded third in the women’s draw at this year’s U.S. Open reaches the ball with a moment to spare, which is all she needs to send it back diagonally over the net.

Miss Radwanska is a point or two from clinching the first set of this second-round match, having taken the first five games in less than 20 minutes. She is playing against a young Spanish damsel, Maria-Teresa Torro-Flor, who is rather bigger and taller and heavier than she and who hits harder. But it sometimes seems she is playing with her, pushing her around the court like a marionette. It would be embarrassing were she not putting on such a pleasing demonstration of grace and form. “Everything was working,” as she said afterward. “Serve, return, everything.”

That was it: everything was working. Which means: she was working. What to the naked eye, even the eye of the seasoned fans and sportswriters sitting in the sun-drenched bleachers of Louis Armstrong Stadium on a pleasantly warm August morning, looked like a game, in reality was serious work. Even when she is stretching in some impossible way to retrieve a ball that others would not even try for, or making one of her characteristic crouching groundstrokes, her movements seem almost painless. You could say this of a classical dancer, too. And what they do with such apparent lightness is not the equivalent to sitting in a deck chair or on a waterbed.

Work is work. Many — several, at least — of the top women on the tour have this grace of movement and this seeming soft touch, this acrobatic suppleness, this ability to stretch and reach. Venus Williams is the most gifted of these ballerinas of the court, because of the way she is able to combine astonishing movement, speed and surefootedness, which is perhaps a way to say timing, with power. Power is not part of Agnieszka’s game, as it is part of her sister Urszula’s.

To be sure, all this is relative. Urszula, for example, might be considered a soft hitter by Venus’s sister Serena, or even Venus herself, or by Samantha Stosur or Vika Azarenka.

Venus Williams stepped on the surface of Louis Armstrong Stadium just before the rain started falling, which it did a few minutes after Miss Radwanska left, having fought off a strong effort by Miss Torro-Flor in the second set, which went to 7-5. That second set itself was a reminder of how in tennis, “everything working” can suddenly turn on its head. You can explain it, sometimes, but if you are in the middle of it, it seems the fates are turning against you.

But the fates are not against you. It is only you against the person on the other side of the net, and the ball, and of those two, the latter is the more important, according to old school pros. “Just play the ball,” they say. “You cannot control your opponent, but you can get to the ball and hit it.”

The irony is deliberate: if you hit the ball in a certain way, it is because you want your opponent to hit it in a certain way, or better yet, not hit it at all. But it is true that this matter of “dictating the point” and making the other side miss is, in terms of what you can in real life control, a matter of… hitting the ball.

The thing that perturbed Agnieszka was that young Maria-Teresa, a newcomer to pro tennis making her first appearance at Flushing Meadows, which is in Queens, the great northeastern borough of the greatest city on earth, New York, speeded up the game. And while she has poor control and hit a lot of shots long, it perturbed Miss Radwanska’s style and, naturally, she had to adjust. Adjust she did, and while it never appeared likely the match would head to a third set, there were moments when the thought must have crossed the challenger’s mind, or else she would not have fought on.

There were rain delays in the afternoon, and by the time the Williams-Zheng match got going in earnest, it was nearly time to turn on the lights.

Miss Zheng, who is the second most famous Chinese tennis player in the world but is not well known outside China — her compatriot Li Na easily won her second-round match first thing in the morning before the first rains — hits very hard, but not, normally, as hard as Venus Williams. She stands five feet and a half to Venus’s six-one. She is small and mighty, Venus is tall svelte and mighty. They are both supremely intelligent tennis players, always more aware than almost any opponent of what is going on — on both sides of the net.

Jie, who is from Cheng Du — probably their Kansas, but what do I know? — uses, to great effect, a playing style known as “counterpunching,” which means she reacts to the other’s might. This is the basic principle of a variety of Oriental fighting styles, which consist of using the enemy’s own weight, or tactics, or what not, against him. You may recall that during the Vietnam war — but never mind. Miss Zheng is a fantastic counterpuncher because, additionally, she has one of the finest shot-making skills in the contemporary game and a court vision that calculates where best to place the ball in relation to the location and probable motion of the other fellow, girl rather.

Thus we see that “playing the ball” involves thinking about the other party, but it still comes down to hitting the ball where they ain’t, or setting it up so they will have to return it to where you can hit it away from them.

This is not news to Venus Williams, whose own talent for placing shots and catching whatever you send her is second to none. This is not the same as counterpunching but it counters the counter punch.

In the first set, it did not. Miss Zheng broke her opponent early and then broke again — at love! — when Miss Williams served at 3-5. This was hardly the end, as Venus, with a keen sense of what she was up against, changed her game in the second set, whose score, 6-3, does not reflect how hard both women fought it out. Miss Williams varied her strokes to hit the ball more lightly, making Jie Zheng over-hit. The stats are telling: where she made only five unforced errors in the first set, the number rose to 12 in the second.

In the dramatic third set, which went to a tiebreak, the packed stadium was on edge for an hour and a half, screeching and clapping between points. Although heavily partisan, the audience applauded Miss Zheng’s fantastic defensive play, which finally paid off. Serving at 5-5 in the tiebreak, Venus, at the net, netted what for her should have been an easy volley, and with Jie back on serve, she sent a rather listless inside out forehand out of bounds.

Not long after, it was the turn of Agnieszka’s sister Urszula to step on the court at Arthur Ashe Stadium, facing the bright American prospect Sloan Stephens, fresh off a victory over Mandy Minella of Luxembourg. She lost badly, 6-1, 6-1.

On the American men’s side of things, James Blake went forth to battle Ivo Karlovic into the night, having announced his imminent retirement the day before. As night began thinking of morning, the popular child of Yonkers, who gave enormously to the game despite serious injuries and was a great U.S. Davis Cup team member, made his last stand in a point-for-point five set match that ended in a tiebreak. The marvelously deft Brian Baker fell a little short before the durable Australian Lleyton Hewitt, a past champion here, but feisty Tim Smyczek slugged it out and prevailed against another heir to the great Laver-Rosewall legacy, James Duckworth. Who knows? One of these guys may yet end up against the mighty but gentle giant of Tandil, Juan Martin Del Potro, who outlasted a resilient Guillermo Garcia-Lopez in a four-set, four-hour match, or Andy Murray, who dominated the spirited French doubles expert Michael Llodra.

This is a big stage indeed. The huge emotion generated Tuesday by Victoria Duval, the teenager from Haiti beating the great Australian veteran Samantha Stosur (2011 U.S. Open champ), followed by the nail biting excitement of the Williams-Zheng match yesterday: this is, corny as it sounds, what the U.S. Open is all about, with human and athletic drama in a city that has seen it all and never tires of seeing it again.