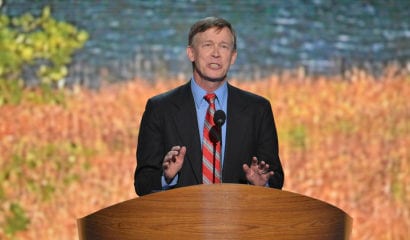 Have you seen the Lifetime movie about the mistreated wife who threatens to leave her abusive husband only to have him promise to be more sympathetic to her feelings in the future…and that he’ll do his best, really he will, to stop hitting her? She spends the rest of the movie considering it, wondering whether to trust him, while you yell at the screen “Just get out of there while you still can!”

A lot of Coloradoans, especially in rural counties in the northeastern part of the state, feel like that abused wife with the Democrat-controlled state government and particularly Governor John Hickenlooper playing the divorce-worthy brutish husband.

Thousands of Coloradoans are now considering the wisdom of a political divorce, moving on from a state that just doesn’t understand or respect them anymore.

They are not thinking of moving to Wyoming or Nebraska, but rather seceding from Colorado to form the new state of North Colorado. And so, with the unanimous vote of Elbert County commissioners on Wednesday, at least ten counties (the state has 64 counties in all) will have measures on their upcoming November ballots asking whether they should leave Colorado and join to form a 51st state.

The secession-minded area includes some of the state’s most fertile farmland as well as the heart of Colorado’s oil and gas industry. It contains a small city or two, such as Greeley, home to University of Northern Colorado, but is mostly home to small towns and farms and ranches and related businesses without a lot of population. Indeed, the new state would be the least populous in the nation. Of the counties that are currently certain to have secession on the ballot, Weld County (which contains Greeley) has a population of about a quarter million people. None of the other counties are even a modest fraction of that size, with only three of the others exceeding 10,000 people (and none of those over 25,000).

Many residents of these counties see people moving to Denver and Boulder from California and New York, bringing those states’ liberal politics and urban agendas to the diverse and once libertarian-conservative state of Colorado. As Weld County Commissioner Sean Conway put it, “the state I grew up in, the state that I’ve come to love, is slowly and surely slipping away to something I don’t recognize.”

Of the nine contiguous counties considering forming their own state, all fall in Colorado’s 4th Congressional District, represented by Republican Cory Gardner, a 39-year old from Yuma, CO, whose family business is selling farm equipment. (Moffat County, which will have secession on the November ballot, is in the northwest corner of the state, posing an interesting issue if it were to join other counties that do not border it; a similar question may arise with rural counties in southern Colorado.)

According to the most recent National Journal rankings, Gardner is the tenth most conservative member of the House of Representatives — and that’s just how his constituents like it.

Which explains why so many in that corner of the Centennial State feel abused by our current state government.

In the waning weeks of the most recent legislative session, Democrats passed restrictions on gun rights, increased renewable energy mandates that will increase electricity prices for rural Colorado, and placed on the November ballot (because tax increases must go to a vote of the people in this state) a measure calling for a massive increase in the state income tax rate, aiming to fleece citizens out of another billion dollars a year. It would also take Colorado from having a flat tax to having a “progressive” income tax, with even higher rates for those making over $75,000 per year.

It’s no wonder that the Durango Herald called this legislative session “one of the most liberal ever.”

Democrats seem not to have noticed that a much smaller tax hike — also marketed as “for the children” — failed by a whopping 38% margin (nearly 2-to-1 against) just two years ago in an election that the Denver Post called a “killing field” for tax hikes across the state. It is hard to imagine we are feeling more tax-friendly now after a season of abuse by the state’s power-mad Democrats.

The abuser-in-chief is Governor John Hickenlooper who, in addition to supporting all of the above items from the liberal politicians’ bucket-list, gave a “temporary reprieve” to convicted murderer Nathan Dunlap. In 1993, Dunlap walked into a Chuck E. Cheese restaurant and murdered four employees, three of them teenagers. He was sentenced to death in 1996, but appeals held up justice until this year — when Hickenlooper took over that particular role.

Hick’s explanation was a muddle of self-centered psychobabble pretending to be reflecting a non-existent division among the families of the victims or among most Coloradoans. And he didn’t even have the courage of his convictions to simply commute the sentence; instead he temporarily halted the execution so that a future governor could send Mr. Dunlap to the fate he deserves.

Hickenlooper plays the perfect abusive husband, promising to be better in the future. In a recent interview with the Craig Daily Press he said, “If this talk of a 51st state is about politics designed to divide us, it is destructive. But if it is about sending a message, then I see our responsibility to lean in and do a better job of listening.”

Of course, when it came to the gun debate and the wishes of New York City Mayor Michael Bloomberg (whose anti-gun lobbyist I met in the Colorado State Capitol during the hearings), Hickenlooper was not so much leaning in as bending over.

And in a recent interview on The Mike Rosen Show on 850 KOA in Denver, Hickenlooper offered this tacit admission: “There are enough people that feel that their views and their opinions aren’t being considered that I think that’s a serious problem and I take it very seriously. And you have my commitment that I will, you know, work especially hard this next session to try and make sure that we have a more balanced approach to all Colorado.”

In other words, this man, who ran as a pragmatic back-slapping moderate but has recently governed as a leftist better suited for Manhattan or San Francisco, recognizes that in this purplest of states, Democrats have run roughshod — the meaning of “unbalanced” — over the will of many or most of our citizens.

But he was in a position to stop them, and he didn’t. He is not a victim; he is a co-conspirator. He is the husband who beats his wife and then says “I promise it won’t happen again.” Only an idiot would believe him.

As the abused citizens of rural Colorado consider secession, the issues are complex and success is unlikely, not least because it would require the approvals of Congress and of the state legislature and of the voters of Colorado. A cynical Democrat-controlled state legislature might actually want North Colorado to leave, and take its Republicans with it, in order to cement liberal control of the remaining state. A Democrat-controlled house of Congress would not approve the addition of a 51st state that would be all but certain to send two Republican senators and one Republican representative to Washington, DC — unless it were part of a deal to simultaneously add Puerto Rico, likely to be as reliably Democratic as North Colorado would be reliably Republican.

Big issues would remain within the new state, perhaps the largest being water. As an entirely rural area North Colorado would have substantial water needs, but the new state would not initially be part of the Colorado River Compact, which allocates water from that river among seven southwestern states, nor initially part of other later water compacts between Colorado and states that border it. Though these issues are more a matter of lawyering than an insurmountable hurdle, the fear of losing water rights is already causing otherwise secession-minded county commissioners to reconsider.

There are also questions of asset purchases with some suggesting, for example, that North Colorado would have to buy the University of Northern Colorado and other fixed assets such as prisons within the new state’s territory.

And from the “what if?” files, what if the state legislature approves secession but the federal Congress does not? Would North Colorado then become a territory but not a state, and would the citizens of North Colorado be willing to secede if it meant no representation in Washington?

The resource-rich nature of the proposed North Colorado makes the idea of secession particularly interesting. Weld County produces 80 percent of Colorado’s oil and nearly 20 percent of our natural gas, representing nearly 40 million barrels of black gold. As the Denver Post put it, “All that production helped contribute $1.6 billion to the state and local governments, school districts and special districts in 2012.” Furthermore, the top five Colorado counties in terms of dollar value (based on 2007 data) of agricultural crop production (especially cattle, wheat, corn, hay, and millet) are in the northeast part of the state, and all have secession on the ballot.

State Senator Greg Brophy, a Republican from the small town of Wray (population 2,354 in 2011) near the Nebraska and Kansas borders and himself a farmer, has a particularly nuanced view because he is running to replace John Hickenlooper as Governor of Colorado in 2014:

Colorado is almost a perfect state. If we had a beach, it would be. We can feed ourselves. We have enough energy production to take care of our own needs. We have great restaurants, theater, and sports venues in the metro areas, and then we have the mountains. It’s a great state and we should keep it together if we can, with a governor who will represent the entire state. So, although I wouldn’t vote for secession, I’m encouraging my friends and neighbors to keep talking about it because we’ve tried everything else — everything the experts tell you you’re supposed to do with your elected officials — and still the governor ignored us. This is a natural consequence of a governor who acts as if he’s only representing Denver.

The 51st State Initiative will likely turn out to be little more than a protest vote. And while it will be a more significant and more discussed protest vote than most with the potential benefit of showing moderate voters in other parts of the state that the current crop of Democrat politicians are unaccountable petty tyrants who deserve to lose their next elections, it also poses the risk of showing Democrats that conservative objections to liberal steamrolling are just sound and fury, signifying nothing.

Actually, they already believe that.