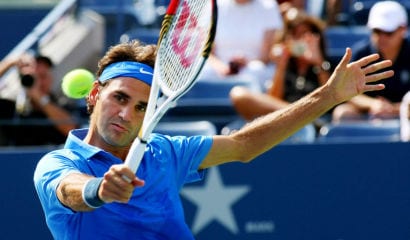 Shuai Peng held on through who knows how many deuces while trying to serve out the second set in its tenth game. She finally wore down the grunting, huffing and puffing Svetlana Kuznetsova. Miss Kuznetsova is a past champion here (2004), and she won the French Open at Roland-Garros in 2009 and she is, basically, a world power in tennis, among the top in the world. So is China a world power, and Miss Peng is Chinese. China is more a world power than Russia, some observers believe. The Chinese are definitely a Pacific power. They are becoming a tennis power.

I asked Michael Wan about this the other day as we both observed the fabulous second round match between Venus Williams and Jie Zheng. I asked him obliquely, to be courteous. I did not want to be pushy or offensive and ask directly is China a world tennis power because that could be taken as a challenge as if I were questioning China’s ability or desire to be a power. Why should I inquire about such things? Had not Westerners and Americans in particular done enough harm already to Asian and other Oriental peoples? So I asked obliquely. I meant to be inoffensive and polite. I observed that Miss Zheng — this was during a changeover when talking is permitted — is a marvelously talented player and what grit and resilience, so how come she is not well known? How come she is not as well known as Na Li, who had won her own second round match a few hours earlier and was quite happy about it. She won decisively, even easily. Na Li is in fighting trim at the 2013 U.S. Open, held at the Billie Jean King Tennis Center at Flushing Meadows, Queens, the great northeastern borough of New York where, in fact, many citizens are of Chinese ancestry and culture.

“It’s obvious,” Mr. Wan said, “look at the record.” It is true. Miss Na has placed more highly in the rankings and she is the first Chinese woman to win a major, the French Internationaux, in 2011. Miss Peng, who is from Hunan, has made it to the third and fourth rounds in several of the majors and she won at Wimbledon this year in doubles, playing with a Taiwanese partner, Su-wei Hsieh, which definitely proves something, though I am not sure what. And Miss Zheng also has been to the third or fourth round in many majors, and she has won twice in doubles, once in Australia and once at Wimbledon. The truth is, by my computation their records stand up pretty well next to Miss Li’s, but she has that win at Roland-Garros. She has made more money, too. She knows what this means, and observes that China is a big market. As she put it the other day: “I mean, I would like to say I was so […] proud I grew up in China. China has huge market. […] So many things, both, everything, like plus, plus.”

I forgot to ask whether she was referring to consumer products in general, including the various made-in-China gizmos they sell at Walmart and other big retail outlets, or just tennis. If you look it up, however, sports economists inform you that there are 14 million tennis players in China, and the tennis market is worth four billion. The other thing I forgot to ask was whether this is dollars or yuan, but quite frankly I rather doubt it matters.

Mr. Wan’s insight, however, had to do with Miss Zheng’s playing style. Miss Zheng, he said, lets the other player dictate the way the match goes. Yes it is true, he politely agreed with me, that she has huge talent, that she can hit back anything you hit at her, that she is gritty and places shots like a sharpshooter. But because she is so reactive, she can be fooled. This is what Miss Williams understood and made use of to very nearly climb back and pull off a magnificent come-from-behind victory, losing through most of the third set and then tying it up and forcing a tiebreak which could have gone either way until it went one way.

Miss Peng is not at all like Miss Zheng in her style. She is more a classic baseline groundstroker in the style of so many young women these days. Young men too I should say. They seem to love that baseline. And yet I have noticed here at the U.S. Open that many players are going to the net. Maybe there has been so much talk about the fear of going to the net, supposedly because of the superior power in today’s game, that finally it has occurred to many tennis champs to go to the net. “Nobody thinks I can go to the net,” they say to themselves, “so I shall fool them and go to the net!” Nobody thought they would ever cross the Yalu River, either, but I did not say this to Michael Wan, who is a charming man and friendly as can be, as well as a sports producer for Sinovision, a Chinese media company. Also it had nothing to do with what we were talking about, so why should I have said it?

Miss Kuznetsova, who had won the first set handily, finally caved and they went to a decider. This was fought grittily to 5-4, on the Russian’s serve, when Miss Peng injured her knee, or her thigh, or both. A brief timeout with a trainer and an ice pack gave her the strength to return to the court, but it was clear her heart, or her mind, and certainly not her leg, was in it as she grimaced and bent over, and the match was over in a few moments. It was too bad it ended this way but it was a fine match nonetheless, with Miss Kuznetsova a bit erratic but giving a great display of movement and power, hitting the ball from one side of the court to the other, taking chances, and often going — c’est le cas de le dire, as they say — to the net for the old wham-o. She is often quite good with this sort of high energy game, but she made a few errors too and frankly, leg or no leg, it was going either way, that match, until the 12th of the third.

This is also what happened over the next three hours on the same court, court 11, a pleasant and sunny court not far from the fabled Court 17 where Tim Smyczek, the Milwaukee mighty mite (he is small, compared to many of today’s players, who look increasingly like basketball players, but I would not tangle with him for all that, and would not anyway because he is a friendly man and a gentleman) won his first round match against James Duckworth in a blaze of big serves and power groundstrokes on Wednesday.

What happened was that Jack Sock and Maximo Gonzalez played one of the best matches of the tournament to date, almost as good as Williams-Zheng, at least until the fourth set when the man from Tandil lost his serve early and with it the energy and decisiveness and hunger that made it a ball game through three sets of extraordinary effort on both sides. Neither man let himself be fazed by the long rallies and cross court I-dare-you-to-go-after-this-one kinds of shots they were making, and both attacked at the net when they saw opportunities. Given the great power of Sock’s forehand, and also due to his clay court origins in Argentina, Gonzalez played behind the baseline and Sock repeatedly took advantage of this with drop shots, everyone of which Gonzalez, an extraordinary battler, went after, often successfully. It was a great display of male power tennis. Venus Williams was not kidding, though she was in jest (she was on a TV show), when she said she would last ten minutes against Andy Murray. “It’s a different sport entirely,” she said of the men’s and women’s tours.

Sock is only 20, and while a deep run is not improbable by any means, the important thing is that his tennis technique is constantly improving. He made quite a few mistakes — altogether too many double faults (nine) and what the stats geeks persist in calling unforced errors (someone has to set you up to make the error, no? so why is it unforced just because you got to the ball and hit it?), but he also hit nine aces and more than twice as many winners (where you put it away and the other fellow cannot get a shot back) as the extremely fast and steady Gonzalez. He made some remarkable catches of shots that by rights could have been winners. Most impressively, he overcame a temporary weakness and turned the tables on Gonzalez with it. This was a backhand that through much of the third and fourth set Gonzalez was able to exploit. Sock showed frustration as he netted shots and failed to return serves to his left side, but he shrugged and continued, found other ways to stay ahead, and finally got his backhand back, just about the time when Gonzalez’s collapsed — Sock used repeated poundings to his left, in fact, to win the last few points and close out the match.

It was not a great day for Argentina, in truth, with Carlos Berlocq crushed earlier in the day by Roger Federer, who may find himself up against one of the revelations of the tournament, the young British qualifier Daniel Evans, who beat Bernard Tomic in four sets. Evans, who is from Birmingham and at 23 has never played here or anywhere else except twice at Wimbledon. On the other hand, the other man from Tandil, Juan Martin Del Potro, toughed it out the other night against Guillermo Garcia-Lopez and appears to be in good form for a deep run. And may the toughest and the grittiest win the race.