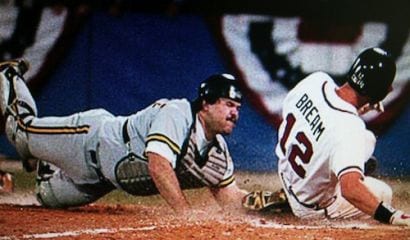 On October 14, 1992, at Atlanta’s Fulton County Stadium, something evil transpired, unleashing a malevolent force that, for the city of Pittsburgh, has only now—over 20 years later—been exorcised.

On that date, the Atlanta Braves defeated the Pittsburgh Pirates in Game Seven of the 1992 National League Championship Series, allowing the Braves to advance to the World Series, where they lost to the Toronto Blue Jays, thus ceding America’s Pastime to the Canadians. For the Pirates, however, their hopeful run was over—dashed, crushed.

But it was so much worse than that. How much worse?

For starters, it helps to understand that the Pittsburgh Pirates are one of the most storied franchises in professional sports. They go back to 1887. They hosted the first World Series (1903). They’ve won five of them, even as they should have won more, given their caliber of teams and players. Some of their best teams lost to some of the best teams ever, such as the 1927 Pirates losing to the vaunted 1927 Yankees, or the slugging “Lumber Company” of the mid-1970s being denied by Cincinnati’s frighteningly powerful Big Red Machine. Even then, the Pirates of that decade won the World Series in 1971 and 1979, the latter being Willie Stargell’s “We Are Family” club.

Unfortunately, the magnificent run in the 1970s went belly up in the 1980s, a ghastly period. A bunch of sorry individuals, equipped with illegal drugs, trudged through the team’s clubhouse, culminating in the embarrassing Pittsburgh drug trials. Dale Berra, son of the legendary Yogi Berra, was involved. As a bellwether of the city’s mood, when President Ronald Reagan called in to congratulate Willie Stargell at his 1982 retirement ceremony, the Gipper was booed by malcontents, even as Stargell was moved to tears by the gracious gesture.

Making things worse, Pittsburgh hemorrhaged population, as the steel industry continued its slow death. This and other factors turned the Pirates into a small-market team that struggled to retain top talent. Would baseball in Pittsburgh ever again experience glory days?

Alas, a wondrous thing happened in the late 1980s. The Pirates got a general manager named Sid Thrift and an unknown coach named Jim Leyland. Through some shrewd deals, Thrift assembled a superb team, with players like Barry Bonds, Andy Van Slyke, Bobby Bonilla, Doug Drabek, John Smiley. The Buccos surged, displacing the arrogant New York Mets atop the National League. They made the National League Championship Series (NLCS) three years in a row: 1990, 1991, and 1992. They fielded arguably the best team in baseball, but they couldn’t break through to the World Series.

That was troubling enough, but the Pirates’ chances were not only slipping away in the immediate term but much longer. Other teams with gobs more money—the New York Mets, the Atlanta Braves, and others—were poised to buy away the Pirates’ stars.

It wasn’t that those larger cities had more dedicated fans. To the contrary, as percentage of local population, the Pirates outdrew those teams. Those teams had more money because of massive cable TV revenues unavailable to the Pirates. For the Braves, that reality was particularly revolting: they had gazillions because of their owner, Ted Turner, a wealthy cable TV maven (CNN, TBS, TNT, TCM) who—in the ultimate insult—was an extreme leftist who openly expressed his contempt for the free-market system, for traditional American ideals, for belief in God, and, generally, for the very principles that permitted his riches. Turner’s politics matched those of his wife, Jane Fonda, erstwhile Viet Cong cheerleader. “[I]f you would understand what communism was,” the Viet Cong glamour girl once told an audience of college students, “you would pray on your knees that we would someday be communist.”

Well, America wasn’t communist, much to Jane and her hubbie’s bizarre chagrin, but to their extraordinary financial benefit—and to the benefit of the Atlanta Braves.

Such was the ownership of the Braves on October 14, 1992. It was such teams that meant that the Pittsburgh Pirates had a very short window. This was it.

Ah, but not just Ted’s and Jane’s Braves.

It was also Jimmy Carter’s Braves. Yes, the same Jimmy Carter who, at that point, was the worst president America had ever had.

Adding to the agony, during every Braves’ home-game in the playoffs, America was treated to the unwatchable, insufferable spectacle of Ted and Jane and Jimmy standing and doing the “tomahawk-chop” while chanting in eerie unison with the Georgian faithful. The faithful, mind you, would never agree politically with these three, but, nonetheless, dutifully joined them in robotic cadence. As for Ted … Hell, he gleefully accepted their support and cash.

Other than blindly loyal Georgians, who could want this team to defeat the Pittsburgh Pirates in the latter’s final chance for a World Series?

Such was the background to Game Seven of the 1992 NLCS, which, it turned out, was an incredible display, and not just because of the extraordinary ending. The way things unraveled for the Pirates in the final few innings were plainly inexplicable, with errors made by players (Jose Lind) who rarely made them, with balls hit just inches enough in the necessary direction, or thrown a foot or two off-line.

The way it ended in the bottom of the ninth inning was stunning. A journeyman hitter named Francisco Cabrera, who shortly thereafter would be out of baseball and driving a cab, surgically placed a ball barely out of the reach of the Pirates’ superb-fielding third baseman, Jeff King, and also out of the reach of the sure shortstop, Jay Bell. The Pirates’ MVP left-fielder, Barry Bonds, was probably playing too far back. Nonetheless, he quickly picked up Cabrera’s hit and made a somewhat decent throw to home-plate—not a very good throw, but not notably bad. It wasn’t good enough.

More striking was the cumbersome ox limping its way toward home. Somehow rounding third and scoring from second-base was Sid Bream, who had been a Pirate in the years prior. Bream was one of the more inexpensive players the Pirates had already lost. They couldn’t scrape up what Ted Turner could easily toss to Bream. He beat Barry Bonds’ off-line throw. The Braves were headed to the World Series, with the added gigantic promise of an unending cascade of cash for years to come. For Pittsburgh, it was all over. It was death.

Personally, I’ll never forget it, or get over it. I was watching from the apartment of my fiancé (now wife) in College Park, Maryland. She slept peacefully as I observed in excruciating, rising horror. As Armageddon closed in, she opened her eyes and inquired sleepily, “Are they going to win?” Numb, I murmured: “I don’t think so. I have an awful feeling. Something really bad is happening here.”

When Sid Bream slid home, I staggered to the back porch and sat speechless on the cold cement, arms folded, alone, staring at the sky, worthless World Series tickets in my pocket. I later learned that Andy Van Slyke, the Pirates’ tremendous center-fielder, assumed a similar position in the outfield. Meanwhile, Sid and his teammates and Ted and Hanoi Jane and Jimmy Carter and the Braves’ faithful reveled in ecstasy, blissfully ignorant of the outrageous injustice cruelly meted out by the baseball gods.

Well, surely I didn’t mean that.

This was, to be sure, no work of Divine Providence. In fact, perhaps the only worthy thing I took away from that vicious night was the certainty that God does not intervene in deciding winners and losers in professional sports. The merciless blow dealt to the Pirates by the unholy trinity of Ted and Jane and Jimmy and their chanting brethren was unmistakable proof of that. A just God that intervenes in the affairs of men of sport would not permit such crass ignominy.

Our God is a loving God, not a hateful one.

If anything, what descended that dark night of October 14, 1992 was, dear reader, the work of an insidious force that, to the contrary, fouls the affairs of men in a most ignoble, diabolical way. It delights in cruelty.

To that end, the full scope of the Pittsburgh Pirates’ calamity unfolded soon after that misbegotten evening. Just as everyone expected, the team was systematically dismantled. The next year, Barry Bonds and Cy Young-winner Doug Drabek left for more money. Steadily, the remaining stars departed the Steel City that had nurtured and loved and embraced them, as did a heartbroken and helpless Jim Leyland, who had to go elsewhere to win a World Series.

Painful enough, yes, but the agony didn’t end there.

As I said, something genuinely evil unfolded that grim evening. You could feel it. It was palpable, and just beginning its havoc.

As baseball fans know, the poor (literally) Pirates went further into the abyss than any team in the history of American professional sports. As the Braves won pennant after pennant, the Pirates began a breathtaking 20-year losing streak. They went 20 straight years, an entire generation, without a winning season.

The dire phenomenon left one grappling for supernatural explanations. It was as if the Pirates and their devoted fans had to enter a sustained period of sacrifice, penance, and reparation for the unforgivable sin of losing as they did to the team they did, and at such a monumental moment in franchise history. Thus began an extended period of exile, the most dubious in the annals of American sport.

Or was the explanation more sinister still? It was as if that arcane, brooding chant and chop of Ted and Jane and Jimmy and their accomplices had imparted some sort of curse. At various times over the last 20 years, I can attest that it seemed that the Pittsburgh Pirates didn’t need a good pitcher or good third baseman; they needed a good exorcism.

That brings us to this current week in baseball history. I can’t vouch for any exorcism that might have been performed at heavenly PNC Park, but the Pirates last week finally broke the curse, securing their first non-losing season since 1992, when Sid slid home. Not only that, but they have one of the best records in the National League and all of baseball … along with the Atlanta Braves.

A pall has been lifted from the city of Pittsburgh. The Pirates have been resurrected from the baseball dead. The Grim Reaper has left the stadium. The sun dawns again at PNC Park.