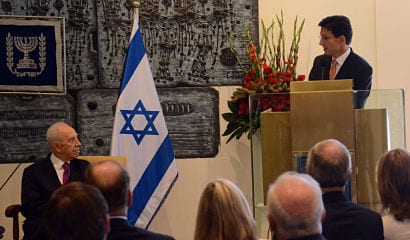 In recent years, I’ve been a small donor to the American Israel Public Affairs Committee, commonly known as AIPAC, the largest organization focused on U.S. support of Israel and a potent force in American politics.

On one hand our government’s giving to Israel, about $3 billion annually, while small as a percentage of our budget, remains quite a lot of money and difficult to justify as a constitutional function of government or even as a particularly effective foreign policy tool.

On the other hand, there is strategic value in the U.S. having a reliable ally in the Middle East; this makes our aid something slightly different from a gift at taxpayer expense, but the degree of difference is a matter of legitimate debate.

And while much of the aid is spent in the United States, especially on weapons systems, foreign aid should not be a covert military-industrial jobs program.

In short, I have very mixed feelings about one of AIPAC’s primary functions.

Nevertheless, in part because I do support Israel and in part because close friends (Jewish Republicans!) have asked me to, I have written a few small checks to AIPAC over the last several years.

But with AIPAC’s aggressive support for a U.S. attack on Syria — Politico reports that AIPAC “is planning to launch a major lobbying campaign to push wayward lawmakers to back the resolution authorizing U.S. strikes against Syria” — my financial support of AIPAC is over.

It’s not as if AIPAC is behaving differently from other Israel-oriented groups such as the Anti-Defamation League (ADL), the Republican Jewish Coalition (RJC), and the National Jewish Democratic Council (NJDC), each of which has come out in support of an attack.

The very liberal J Street organization, which has ties to the Obama administration and which some consider as much anti-Israel as pro-Israel, has not yet taken a position on U.S. involvement in Syria. It must be difficult deciding between being “pro-peace” and sticking with Dear Leader despite his newfound warmongering.

AIPAC’s website, however, is awash with stories and press releases about Syria, as well as a picture of a pretty, serious-minded girl holding a candle and a picture of a person wearing a gas mask. (Hey, if hot chicks are good enough campaign material for Australia’s Tony Abbott, maybe they’re good enough for us to go to war for.)

AIPAC’s statement on Syria is an amalgam of the weak cases, both moral and strategic, being offered by the Obama administration, including:

The ADL’s statement is somewhat less specific: “Failure to approve this resolution would weaken our country’s credibility to prevent the use and proliferation of unconventional weapons and thereby greatly endanger our country’s security and interests and those of our regional allies.”

The Republican Jewish Coalition (a slightly larger group than Jewish NBA stars; I wonder what Amar’e Stoudemire thinks about Syria) sent an “Action Alert” to its members in which the RJC asks, but doesn’t answer, the question “Is it in our national interest to respond to the violation by Syria of the international norm against the use of chemical weapons?”

Apparently the answer is “no” because they simply change the subject: “Democrats and Republicans must work together to avoid the loss of moral standing and diplomatic credibility that would result if Congress denies our military the support it will need to execute its mission successfully.”

The RJC’s Democratic counterpart, the NJDC, argues that “failure to authorize force would encourage even worse abuse of weapons of mass destruction, destabilize the region, and endanger the security of all Americans.”

Who knew that Jews were related to parrots?

All of these pronouncements miss the possibility, indeed the likelihood, that a “limited, proportional” strike would embolden our enemies as much as inaction would, and that until we have a new president we will have no substantial “diplomatic credibility.”

As for Israel itself, the Netanyahu government’s official view on U.S. intervention in Syria is unclear, in part because the issues likely to be created by a strike are as nettlesome as the current situation, such as the tremendous risk of the Syrian government losing control of its large stockpiles of chemical weapons. And there is no upside for Israel to be seen as trying to influence the American debate.

Individual members of the Israeli government, living up to the maxim “two Jews, three opinions,” have represented a range of views. Housing Minister Uri Ariel, criticizing Obama’s indecision, said that Assad “is a murderous coward. Take him out.” According to Ha’aretz, “Netanyahu was furious over the remarks because over the past few days he had instructed ministers not to express themselves publicly at all about Syria.”

Israeli President Shimon Peres, speaking in support of President Obama’s taking the Syria question to the American Congress, said that he is “confident the U.S. will respond against Syria” and that he has “full faith in President Obama’s moral and operational stance.” Despite the seriousness in Peres’s voice, one would be forgiven a chuckle at the latter assertion.

To read that “some 250 Jewish leaders and AIPAC activists will storm the halls on Capitol Hill beginning next week to persuade lawmakers that Congress must adopt the resolution” authorizing a U.S. strike on Syria is a disturbing reminder of the danger of superficial analysis of the world’s most complicated problems — the sort of ill-considered reflex that caused our president to draw his “I didn’t draw it, they did” red line that in turn is the primary reason we are in this predicament today.

It is far from clear that the benefits to Israel from a U.S. strike on Syria outweigh the risks, even if you blithely (and unwisely) dismiss the bellicose rhetoric and intercepts from Tehran regarding retaliation against Israeli and American targets by Iranian-backed militants in Lebanon and Iraq.

It is far from clear that the next dictator or junta ruling Syria would be as neutral (in overt behavior if not belief) toward Israel as Assad has been; in fact, that outcome is most unlikely. Because the only thing we do know with certainty is that the only two nations with substantial influence over who will replace Assad — and how they behave — will be Russia and Iran.

Honest people can differ about whether the United States has either a strategic or moral imperative to become involved in Syria after the use of chemical weapons there.

But other than our red-line-denier-in-chief and his useful Republican pawns such as John McCain and Lindsey Graham, no honest person is absolutely confident that he knows which decision is most likely to maximize America’s strategic interest.

In this situation, the U.S. must not suffer the risks and costs of attacking Syria despite the horror taking place there — and neither should Israel. To those who helpfully suggest that Saudi Arabia will cover the costs, I ask since when did the US become a mercenary force taking sides in the 1,400-year-old Sunni-Shi’a family feud playing out as al Qaeda and Hezbollah terrorists slaughter each other in Damascus, Aleppo, and Tripoli (Lebanon)?

For this pro-Israel American Jew, it is unacceptable for AIPAC to use the funds of donors like me to lobby Congress to go to war, especially in a situation where even President Obama admits there is no imminent threat either to the U.S. or to our allies, where the risks have been poorly thought out and the costs lied about, and where the primary beneficiaries would be Islamists’ murderous ambition and Barack Obama’s unsalvageable credibility.