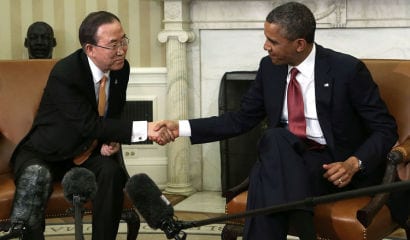 Can a nation try to enforce international law by means that violate international law? This is the great contradiction with which the United States is faced as the Obama administration proposes to take unilateral action to punish the Syrian government for using chemical weapons against its own people.

Barack Obama said in his first campaign for president that the attack on Iraq in 2003 was illegal because it did not have the support of the United Nations. He was wrong about that because the United States, along with many allied states, asserted a right of self-defense against Saddam Hussein, whom many feared would deliver weapons of mass destruction to terrorist groups. Saddam could have avoided that attack if he had permitted free and open inspections of weapons facilities in Iraq. In any case, Article 51 of the UN Charter stipulates that member states do not require UN approval for reasonable acts of self-defense.

But Obama’s injunction does apply to the proposed attack on Syria because the Assad government poses no threat to the United States, to any of our allies, or to any of his neighbors. He has not attacked anyone outside his own borders. In attacking Syria, the United States would be acting, not in self-defense, but rather to enforce an international standard that bans the use of chemical weapons. There is no precedent for such an attack purely on the grounds of humanitarian principle. It stands to reason that any proposal by a member state to enforce an international convention should be brought before the United Nations. The Syrian government is not a signatory to the Chemical Weapons Convention, but as a member of the UN it is bound by its terms; in launching an attack on Syria the United States would be violating the UN charter, to which it is a signatory.

It is said by the Obama administration that Russia and China will use their votes on the Security Council to defeat any action by the United Nations. That may well be true. But the administration has made no attempt to bring its case before the General Assembly or the Security Council, even as it lobbies the U.S. Congress to approve action against Syria. Obama’s position is that, since the Security Council will not approve his proposal, he is entitled to act on his own. Why should that be so? The UN Charter does not single out the United States as the ultimate defender of humanitarian norms. If the United States can attack other sovereign states in defense of international norms, then it follows that other countries can assert the same right — and we will soon find ourselves in a bizarre Hobbesian world where countries are attacking one another in promotion of humanitarian causes.

It will be said by some (seeking to defend the action) that the United Nations is something of a fraud and in any case a dysfunctional operation that can safely be ignored. On this view the whole idea of an “international community” is an illusion. There is some merit in this view; it may even be true. But in that case, whence arises this whole concept of a humanitarian standard that must be defended at all costs?

The Secretary General of the UN has condemned the proposed attack on Syria. The Arab League has rejected it. So has the European Union which, though it has endorsed strong action against Syria, recommends waiting on the completion of a UN investigation of the Syrian situation. There is no international consensus in support of the proposed attack.

In attacking Syria, the Obama administration will be defeating the very international norms it seeks to defend and reinforce. A far better approach for the U.S., the Syrians, and the international community would be for the Obama administration to take its case to the UN in search of some agreement to take action against the Syrian government to deter any future use of chemical weapons.