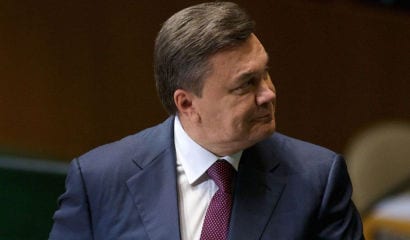 More Politics
Sign Up to receive Our Latest Updates!
Register
Hot Off
The Press
Constitutional Opinions
Trump’s Impeachment Is Unconstitutional and Undemocratic
by Shmuel Klatzkin
California Watch
California’s Ongoing War on Work
by Steven Greenhut
The Nation’s Pulse
With Trump Out of the White House, Will His Followers Secede?
by Doug Bandow
The Nation’s Pulse
A More Perfect and Lasting Union
by Jackie Gingrich Cushman
Free the Market
Joe Biden’s Plan to Build the United States of Italia
by Veronique de Rugy

When the Soviet Union dissolved in 1991a cluster of newly independent states was created. Some, such as Belarus, stayed very close to Russia; others such as Ukraine, made strong assertions of their independence.

With Russia on its north and east, Ukraine could not escape geography or history (Kievan Rus, the beginnings of Russia in the 9th century, was founded in Kiev). And, what had been the USSR’s main naval base, in the Crimea, remained under lease to Russia by an independent Ukraine.

The Western half of the country has long felt strong tugs toward Poland, its neighbor, and further westward. The Eastern half contains a large number of Ukrainians who speak Russian and lean toward that country.

The West means greatly expanded trade and a stronger economy, as well as support for the many Ukrainians who want to strengthen the country’s fledgling democratic institutions. Russia means a steady flow of natural gas, continued trade, and an absence of soft and hard bullying.

For Ukrainian leaders, such as President Viktor Yanukovych, this means a tightrope walk between the competing international interests. It may come to a head at a meeting in November in Vilnius, Lithuania. There, members of the European Union who have been negotiating with Ukraine the terms of an EU Association Agreement and Deep and Comprehensive Free Trade Agreement, will decide whether to sign the final document.

As the event nears, Ukraine is still debating some things the EU wants, such as electoral reform. A referendum law and other electoral reforms are now before the Rada, the national legislature. Also under consideration is legislation to strengthen intellectual property protection.

Yanukovych’s former political rival, Yulia Tymoshenko, remains in prison, convicted of several economic crimes. The EU wants the criminal justice system reformed, including the possibility of allowing the ailing Tymoshenko to go to Germany for medical treatment. There is no precedent elsewhere in the world to enshrine into law leave from prison for medical purposes. Politically, the Tymoshenko situation poses a tough problem for Yanukovych. It would be far better to set aside from the justice reform agenda this item for discussion and negotiation after the EU-Ukraine Association Agreement were signed. The chances for a resolution of the issue would increase considerably if that were to happen.

The EU has also called for reform of the overly generous Soviet-era pension system and for Ukraine to agree to meet with the International Monetary Fund in the months ahead in order to reach an agreement that would bring structural reforms to Ukraine’s tax code which, in turn, would spur economic growth.

A successful outcome at Vilnius could greatly brighten Ukraine’s future. On the other hand, Vladimir Putin’s Russia, always somewhat paranoid about what it thinks are foreign influences interfering with what it considers its historic “sphere of influence,” has been urging Ukraine to join a customs union it wants to set up with Belarus and Kazakhstan. Not so subtly, Russia has slipped the word that the customs union or EU Agreement are an either/or proposition.

Yanukovych and his government have invested a good deal of energy in balancing the interests of West and East in their dealings.

Although the United States is not involved in the negotiations, the reforms the EU is asking of Ukraine are also ones that would benefit U.S. trade and investment in the country. A completed EU Agreement would be welcomed by U.S. companies doing business in Ukraine or thinking about doing so. And, stronger democratic institutions in a part of the world where they were long absent is a perpetual American goal.

An EU agreement would also more permanently put Ukraine’s strategic “foot in the West” to balance any design Putin might have in reconstructing Russian hegemony over this important neighbor. The West cannot afford to lose Ukraine to such an outcome.