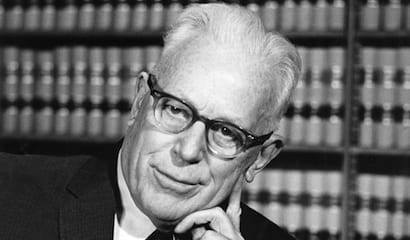 IF WE CONSTITUTIONAL fundamentalists ever triumph in the courts, the person to have whispering the reminder that all glory is fleeting would be Hendrik Hertzberg. A former chief speechwriter for President Carter and now a writer for the New Yorker, he is an honest liberal—and a crafty constitutionalist. He is just out with a column on the only remaining feature of the Constitution that the parchment itself says can’t be amended, namely the equal representation in the Senate of each state, no matter what its population.

Hertzberg’s column came up on the scope when I started poking around about the logic of the Senate, which has been creeping into the national conversation. There was the 13-hour filibuster against drones mounted by Rand Paul. There are all of Harry Reid’s threats to use the “nuclear option”—to change the chamber’s rules so that certain filibusters can be ended with just a simple majority, instead of the 60 votes now required. There is the rat-a-tat of the New York Times against the evils of the upper house, the latest being that it is the “least democratic legislative chamber in any developed nation.”

That phrase is from a dispatch the other day by Adam Liptak, the Times’s Supreme Court reporter and a cagey constitutionalist in his own right. He filed his piece from Rutland, Vermont, where, by his calculation, a voter has 30 times the representation in the Senate of a voter just over the state line in New York. This is owing to the fact that New York has 19 million persons and Vermont 625,000. He reports that the largest gap, between California and Wyoming, is more than twice as big. So in theory, each of Wyoming’s citizens is represented 60 times as much as each of California’s.

The Senate was designed for precisely the opposite purpose: to represent the states. It is true that senators are now chosen by persons, their direct election having been enshrined by the 17th Amendment. But altering the method of senators’ selection did not change their function to represent the interests of their states. So if California were given 120 senators to Wyoming’s two, it would be an enormous inequality.

Not even the legal lug Earl Warren would go for that, though the 14th chief justice of the United States had been a coast governor. It was he who wrote the decision in Reynolds v. Sims, which forbade the states from having a legislative chamber in which representation was not proportionate to population. The difference in population of Alabama Senate districts at the time was as high as 41-1. In the statehouse it went as high as 16-1. Warren wrote:

Legislators represent people, not trees or acres. Legislators are elected by voters, not farms or cities or economic interests.…And if a State should provide that the votes of citizens in one part of the State should be given two times, or five times, or 10 times the weight of votes of citizens in another part of the State, it could hardly be contended that the right to vote of those residing in the disfavored areas had not been effectively diluted.

In other words, the Supreme Court ruled that Alabama’s senate was unconstitutional because of its similarities to the only senate created by the Constitution. Even Chief Justice Warren could see that this was a bit—how to put it?—odd. Warren dealt with the oddity in several long slabs of prose in which he cited what the Nine like to call “the court below,” and agreed that “no conceivable analogy could be drawn” between state senates and the federal senate. In any event, he wrote that the comparison was “inapposite and irrelevant” and “an after-the-fact rationalization offered in defense of maladjusted state apportionment arrangements.”

For good measure, Warren asserted that the Founding Fathers “clearly had no intention of establishing a pattern or model for the apportionment of seats in state legislatures when the system of representation in the Federal Congress was adopted.” To support this claim he cited the fact that the Northwest Ordinance, adopted in the same year, 1787, as the Constitution was written, “provided for the apportionment of seats in territorial legislatures solely on the basis of population.”

In the course of eviscerating the senates of the states, however, Warren did something that will long bedevil the Senate’s critics: He wrote a defense of the upper house. He pointed out the “compromise and concession indispensable to the establishment of our federal republic,” created out of “a group of formerly independent States that bound themselves together under one national government.” He noted that “at the heart of our constitutional system remains the concept of separate and distinct governmental entities which have delegated some, but not all, of their formerly held powers to the single national government.”

WHICH BRINGS US to Article V. It says amendments shall be proposed by Congress, with a two-thirds vote of each house, or a constitutional convention called by the legislatures of two-thirds of the states. It establishes that amendments then have to be ratified by three-fourths of the states. Article V declares that no amendment interfering with the slave trade or laying a direct tax could be made before 1808. And it established that either before 1808 or after, “no State, without its consent, shall be deprived of its equal Suffrage in the Senate.”

Congress moved to block the slave trade the moment the Constitution gave it the chance, and direct taxes were later allowed by the 16th Amendment. Proportional representation in the Senate is a cause beyond reach. Just to mark the point: The Founders didn’t say that equal suffrage in the Senate could never be ended. It just can’t be ended unless the state losing its equal suffrage agrees, which is about as likely as the sun rising over California or George Washington coming back as a Democrat.

What does it signal for succeeding generations that, of all the parts of the Constitution that the Founders could have cherished above all others, the one they singled out to be inviolate for all time is the equal suffrage of the states in the Senate? Why was this protected above all things—the Supreme Court, the presidency, the writ of habeas corpus, to name but a few—from amendment?

To the alleged mal-apportionment of the Senate, critics have attributed all sorts of mischief, but one that caught my eye—in an earlier column by Hertzberg—was the defeat of Woodrow Wilson’s wizardry, the Versailles Treaty and the League of Nations. To that, in turn, the Left ascribed disasters up to and including World War II and the Holocaust. So I had the research department of the New York Sun run the 1919 League of Nations vote through our old hand-cranked Senate Roll-Call Rotary Dis-Ambiguator. What a startling result. It turns out that of the 20 senators in the 10 most populous states, only three voted in favor of Wilson’s treaty. And of the 20 senators in the 10 least populous states, half voted in favor of the scheme. So what is all the blarney blaming this on mal-apportionment?

“The Constitution Lives!” was the headline when the old Sun editorialized on the refusal to ratify Wilson’s treaty. The fact is that only thing mal-apportioned in that chapter of the great Senate debate was Woodrow Wilson’s loyalty to the bien pensant Europeans at the expense of the Constitution he had sworn to preserve, protect, and defend. In his campaign to Make the World Safe for Democracy, he forgot about the original compact.

Is it Safe? Not to keep you awake at night, but feature this little scoop buried in Hertzberg’s recent post in the New Yorker. Most authorities, he reports, reckon that the “two-senators-per-state rule” is “eternally sacrosanct” and that “any change in it would have to be approved by all of the states, à la the Articles of Confederation, not just three-quarters of them.” But he discloses that he once had a startling ex parte communication with none other than Justice Antonin Scalia.

The occasion was a reception after a speech by Scalia. Hertzberg—who is a newspaperman down to the ground—asked the sage “what would happen if an amendment changing the composition of the Senate were ever passed.” Hertzberg paraphrases Scalia as replying “that, offhand, he didn’t see how the Supreme Court could declare a properly proposed and ratified Constitutional amendment unconstitutional” — despite, the idea seems to be, the prohibition in Article V. “So there’s hope,” Hertzberg concludes. He reckons it’s a “wan hope,” but what we constitutional fundamentalists can take from it is the need to maintain vigilance, lest even the glory of the Founders prove fleeting.