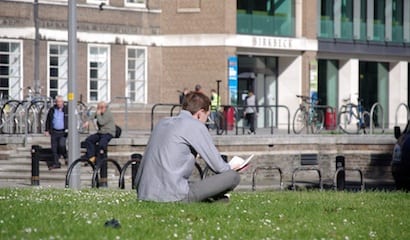 OVER THE SUMMER, the Commission on the Humanities and Social Sciences of the American Academy of Arts and Sciences issued the report it had been tasked to produce when it was created in 2010. Titled The Heart of the Matter, it finds the state of the humanities and social sciences in American education less than satisfactory. Some might argue that we need no blue ribbon commission to tell us this. The social sciences are in a mess all their own, but reactions to the report showed that the state of the humanities is also causing concern among observers outside of officialdom, including some who think they deserve no better. In the Wall Street Journal, for example, Lee Siegel looked forward to the extinction of the English major, already apparently on its way out, under the impression that without the chance to read works of classic literature in college, kids will be all the more eager to read them out of college. Perhaps he is of such an academic eminence that he never has to meet any actual students.

He has a point, however, inasmuch as the reading of works of English literature bears little or no resemblance to what it was when it became central to the discipline of academic “English” a century ago. Then the texts submitted to undergraduate attention were considered to be what Yeats called “monuments of unageing intellect,” so worthy of veneration by the young that they might even be expected to forsake one another’s arms for a bit, turning aside from sensual music-making and other youthful delights to something more cerebral. Nowadays even the greatest works of the past are hardly ever approached in that spirit. Instead, they are “deconstructed”—which means analyzed not according to themes, ideas, or literary techniques, but into the political and social assumptions—especially assumptions about race, class, and sexuality—supposed to be typical of the societies that produced them. Instead of looking up to the authors as great artists, ignorant 19-year-olds are now encouraged to look down on them as political naïfs or propagandists, sadly lacking in their own progressive principles and intellectual sophistication. That must soon become a bore even to the young geniuses themselves.

Such a fundamental transformation of the discipline would seem to be pretty central to any discussion of the present state or future prospects of the arts or humanities in education. Yet it is hardly mentioned by Lee Siegel and not mentioned at all in The Heart of the Matter, whose authors take an entirely instrumental approach to their subject:

The Heart of the Matter identifies three overarching goals: 1) to educate Americans in the knowledge, skills, and understanding they will need to thrive in a twenty-first-century democracy; 2) to foster a society that is innovative, competitive, and strong; and 3) to equip the nation for leadership in an interconnected world. These goals cannot be achieved by science alone.

Not surprisingly, perhaps, they subsequently decline to explain exactly how a close examination of patriarchal assumptions in the novels of Jane Austen, or orientalist ones in the novels of Joseph Conrad, or homoerotic ones in the novels of Henry James, may be expected to accomplish what, in the way of skills, competitiveness, or leadership, science alone cannot. In fact, the report has little or no interest in what is actually taught under the rubric of humanities, only in how much of such teaching there is. More, it is assumed, will be better—economically, politically, socially.

Likewise, Christina H. Paxson, President of Brown University, wrote in the New Republic that “it is difficult to measure, precisely, [the humanities’] effect on the GDP, or our employment rates, or the stock market. And yet, we know in our bones that secular humanism is one of the greatest sources of strength we possess as a nation.” There’s a killer argument for you. Even the New York Times’s Rural Sage, Verlyn Klinkenborg, who moonlights as a teacher of “writing,” doesn’t rely on his bones, but instead writes of “the versatility of thought and language that comes from studying literature” and the “rich sense of the possibilities of language, literary and otherwise.” He admits that such qualities are now in short supply, presumably because of the precipitous decline in the academic study of literature. But he doesn’t think it necessary to draw any lines of causation between America’s economy or world leadership and the poor writing skills of his students—before he has finished with them, obviously—or, more importantly, of their coevals who haven’t had the benefit of his tuition.

Adam Gopnik, blogging for the New Yorker, has no time for such defenders of the English major or of the humanities in general, writing that “We need the humanities not because they will produce shrewder entrepreneurs or kinder C.E.O.s but because… they help us enjoy life more and endure it better. The reason we need the humanities is because we’re human. That’s enough.” Except that it’s not, quite. Even that presupposes a purpose outside themselves. And plenty of humans get along without them very well. It would be truer to say that the reason we need the humanities is that we don’t need them. They are splendidly, sublimely useless for anything outside themselves. Rather, I would say, they are what all the useful things are useful for: to provide us with the leisure to pursue knowledge for its own sake. But one of the consequences of the politicization of the humanities is that that line of argument is closed to us as too frankly “elitist.” The study of English, like that of history, is a natural part of the purpose of life on earth for cultivated English speakers. And for cultivated people, being cultivated is its own justification—though it seems to be not so anymore for uncultivated people, to whom the cultivated now routinely pay deference by pretending to like rap music or falsely assuring them that knowing something about poetry is their ticket to affluence.

MR. GOPNIK IS nearer the mark when he writes that the study of literature is “the one kind of time travel that works, where you make a wish and actually become a musketeer in Paris or a used-car salesman in Pennsylvania. That one knows, of course, that the actuality is ‘fictional’ or artificial doesn’t change its reality.” But knowing our history is not just how we know about exotic characters from the past; it is how we know ourselves. By forgetting that, we become accessories to those who would cut us off from our history in order to remake us according to some theoretical or ideological model. Thwarting that nefarious enterprise would be enough of a utilitarian purpose to studying English if it were taught historically—which it isn’t, because the ideologues are in charge. Instead it is made part of the ideological project that only a knowledge of history can defeat.

The authors of The Heart of the Matter pay lip service to historical study as if it were still what it was instead of what it has become. “How do we understand and manage change if we have no notion of the past?” they ask. “How do we understand ourselves if we have no notion of a society, culture or world different from the one in which we live?” True enough. But ultimately we seek to understand ourselves for the same reason that we seek to understand the literature of the past: because we wish, at least some of us do, to be the kind of people who know and understand such things. That only such people are human in the fullest sense is the assumption on which “the humanities” are founded, not any economic, political or diplomatic benefit they may bring us.

At the conclusion of The Heart of the Matter, the authors quote former Supreme Court justice David Souter, of all people, touting the “tolerance” he supposes to be the fruit of studying the humanities. He quotes Learned Hand quoting Oliver Cromwell—all to produce only this: “Consider that ‘you may be mistaken.’” Do we need such a redundancy of authority for such a banality? One reason for studying the humanities is to understand the difference between that and what Oliver Cromwell actually said to the General Assembly of the Church of Scotland concerning its alliance with the son of the late martyred (by Cromwell himself) King Charles I: “I beseech you, in the bowels of Christ, think it possible you may be mistaken.” In my experience, those who quote that line of Cromwell’s are themselves the ones who are mistaken—at least those who quote it at me. Still, there is no doubt it is a more memorable formulation than David Souter’s paraphrase, which makes it all the odder that he hasn’t remembered it. Memory, we recall, personified as Mnemosyne, was the mother of the Muses, according to the Greeks. But I suspect that Mr. Justice Souter, like the other eminent members of the Commission on the Humanities and Social Sciences, is too eager to be useful to put much stock in being memorable.