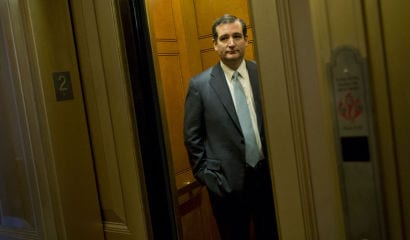 One of Washington journalism’s most cherished traditions is making absurd comparisons between political debates and grand military battles. Obamacare, you’ll remember, was to be the GOP’s Waterloo. Republican policy criticisms in 2010 were called a blitzkrieg. If you’re a heavily caffeinated political reporter, your ego is far better served by imagining you’re a witness to the sacking of Carthage rather than a hearing of the House Subcommittee on Border and Maritime Security.

Far be it from me to depart from this tradition. But what overblown analogy can we apply to Senator Ted Cruz as he fights to defund Obamacare this week?

It’s not his Battle of Thermopylae. Cruz faces daunting odds, to be sure, standing up to the vast majority of elected officials in government. But so steep are his chances that he’s unlikely to find very many senators to fill his phalanx, even in his own party. Republicans are so annoyed that they’re sending Fox News opposition research on Cruz. Anonymous GOP aides on Capitol Hill have been talking trash. Sen. John McCain “f**king hates” the Texas firebrand.

It’s not Cruz’s Pickett’s Charge. Though some historians have speculated that the decision to rush the Union line was an act of desperation, General Lee certainly thought there was some chance of success. Cruz’s allies (Sen. Mike Lee excluded) are ruling out victory before the fight’s even begun. Sen. Rand Paul has said the GOP “probably can’t defeat or get rid of Obamacare” and raised the possibility of “a compromise in the middle.” Sen. Ron Johnson called the challenge “next to impossible.”

You could flip through popular history in this way for several hours, Starbucks venti latte quivering in hand, and still come up short. It speaks to the uniqueness of Cruz’s challenge: The eloquent Texan has started a fight that defies not just historical hyperbole, but also the traditional rules of politics.

We have the GOP House, considered the most conservative faction in the federal government, passing a continuing resolution defunding Obamacare more to shut up a Senate Republican than get it passed. We have Cruz threatening to filibuster the House’s CR even though it’s devoid of Obamacare funds. And we have Senate Republicans furious at Cruz because he’s trying to take out the most liberal health law passed since Medicare. It’s enough to tie the brain in knots.

Cruz is also facing a shrewd and seemingly impenetrable strategy by Senate Majority Leader Harry Reid. Reid, according to Politico, will allow a procedural vote on the House CR, which, if there’s a filibuster, will require a 60-40 majority, which he very well may get. Then he’ll hold a simple-majority vote on whether to remove the provision defunding Obamacare, which he’ll certainly get. The resulting CR will return to the House with very little time remaining before the government closes—something Republican congressmen, many of them haunted by the 1995 shutdown, want to avoid.

So is Cruz’s initiative (I refuse to type “Cruz control”) doomed to failure? The vast majority of the political class would like to think so. For official Washington, Cruz is the ultimate scarecrow, the malevolent face of the evil that has come to their village, refusing to follow their customs and therefore deserving of torrential and ritualistic hatred. Ironically, Cruz’s best hope lay with a member of that political class: Mitch McConnell. The minority leader might have been able to muster up the 41 Republicans needed to block cloture, but he announced last night that he won’t join in. McConnell is facing a Tea Party primary challenger, and ads are already airing accusing him of weakness on Obamacare.

Pressure from the Republican base is the final piece in this puzzle. Conservatives, egged on by talk radio hosts like Mark Levin, are itching for a fight, even if it means risking a government shutdown and political damage to the GOP. And frankly, why shouldn’t they be? The right has been asking for another confrontation over Obamacare since it was passed more than three years ago. Instead they’ve gotten dead-end measures from the House, obstruction from the Senate, a milquetoast Republican candidate for the presidency in 2012 who implemented the blueprint for Obamacare in Massachusetts, and exhortations from Beltway Republicans that they not speak the word “repeal” too loudly lest they offend billions upon billions of skittish independent voters.

All this over a law that remains unpopular and is unraveling the fabric of the job market. Republicans control the branch of government entrusted with the power of the purse. Their voters have every right to be aggravated.

This clash of views within the GOP has produced the clash of views over Ted Cruz. To the political establishment, he’s another Tea Party suicide bomber willing to shut down the government to advance his political fortunes. To conservatives, he’s a hero bravely standing with public opinion against big government and being frustrated at every turn by the machinery of Washington.

There are plenty of perceptions. There are no historical analogies. But there’s only one Ted Cruz, and this week will be a test of both his mettle and his intentions.