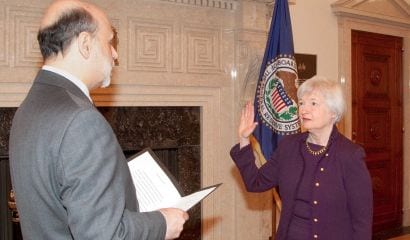 When the Federal Open Market Committee (FOMC) of the Federal Reserve announced last week that it would not yet begin to “taper” its monthly $85 billion purchases of Treasury and mortgage securities commonly known as QE3 (a third round of Quantitative Easing), it came as a major surprise to most Fed-watchers as well as most active stock and bond market participants.

In the hour after the announcement, the stock market went up more than 1.5 percent — over 200 points in the Dow Jones Industrial Average — and over the course of the day, the yield on the 10-year U.S. Treasury Note plunged from about 2.87 percent to 2.71 percent, the biggest one-day drop in long-term interest rates in more than a year. Over the subsequent few trading days, the stock market gave up all those gains and more, but note and bond yield continues to drop, sitting now at about 2.62 percent as investors digest the Fed’s weaker assessment of near-term economic growth.

In short, the Fed’s statement said that economic conditions do not yet justify ending their historically unprecedented support of bond markets. A rational person might say, “Hey, they’ve been doing this on an enormous scale for a year, and on a smaller scale for nearly four years before that, and it hasn’t helped, so let’s stop.” But in government, more money is always the answer.

There are several theories among the professional pundits about what happened. The most plausible is that with the self-removal of Larry Summers from consideration as the next Fed chairman — current Chairman Ben Bernanke is likely to depart in a few months — the next most likely replacement, Janet Yellen, a monetary policy dove of utmost dovishness and probably inclined to continue QE3 for longer than most professional economists would recommend (not that many recommended it in the first place), convinced the Committee that stability of policy, given her preferences for the future, is more important than acting in concert with the prior strong hints from Bernanke that a taper was in fact in the offing.

Whatever the reason for last Wednesday’s surprise, it can only be seen as a disaster for what little credibility the Federal Reserve has left in terms of being a politically independent and credible safe-keeper of a rational monetary policy and the stability of prices and the U.S. dollar that would flow from such a policy.

Like the Old Dope Peddler of Tom Lehrer fame, the pointed heads of the FOMC — whom Ben Hunt, PhD describes as “well-meaning scientists who have never worked a day outside government or academia, who have zero intuition for, knowledge of, or experience with the consequences of their experiments” — are eroding the most basic underpinnings of the American economy with their cynical distribution of the fiscal heroin of persistent near-zero short-term interest rates and the enabling of government expansion through the manipulation of long-term rates.

He gives the kids free samples,
Because he knows full well
That today’s young innocent faces
Will be tomorrow’s clientèle.
Here’s a cure for all your troubles,
Here’s an end to all distress.
It’s the old dope peddler
With his powdered ha-happiness.

It would be naïve to suggest that the non-taper represents a sudden politicization of the Fed. That has been happening for at least a generation as the most powerful banker in the world (whoever he has been at any given time) wants to be seen not just by ignorant citizens, but by whatever president(s) he serves, as a hero, or better as an economic Gandalf the Grey wielding the inexplicable magic of monetary policy to the benefit of the rest of us Hobbits. It also makes for bigger book and speaking royalties in retirement.

But this seems a new level of politicization, one that poses a terrible risk to the perception of the Fed as an even nominally independent entity. This is not just because of the massive (though always denied by Democrats) spending problem within Washington, D.C., which is partially masked by the Fed’s massive manipulation of the Treasury note and mortgage securities markets.

As Terry Jeffrey noted, the Fed has now “accumulated more Treasuries and MBSs than the total value of the publicly held U.S. government debt amassed by all U.S. presidents from George Washington though Bill Clinton. Since the beginning of September 2008, in fact, the Fed’s ownership of Treasury securities and MBSs has increased seven fold.”

If big spenders in Congress and the White House are robbing America’s future generations, the Fed is driving the getaway car.

The reputational risk to the Fed is also because the Fed’s guidance, in a world which is admittedly always hazy, had been remarkably clear: a taper was coming; it is time to cut back on our fiscal heroin. Except that doing so has apparently been deemed unacceptably damaging to the drug dealers and their current and future addicts (most notably politicians) who are far from ready to begin a desperately needed 12-step plan back to a sane monetary policy.

Janet Yellen, not surprisingly a former professor at University of California, Berkeley, is not just a dove (meaning she is willing to risk inflation by keeping interest rates lower for longer in order to stimulate the economy); she is also more obviously a true liberal — perhaps leftist would be more accurate — than even the disappointingly Keynesian “Helicopter Ben” Bernanke.

Although not entirely outside of relevancy for her role on the FOMC, Ms. Yellen’s 2006 speech bemoaning increasing income inequality in America is troubling. Not because people should cheer inequality, but because it is a natural outcome in a free society and a “problem” whose cures are inevitably worse than the disease, even if not always as grotesquely so as the elimination of inequality under Chairman Mao or Pol Pot.

Treading into fair ground for an “ordinary” economist but dangerous shifting sands for a member of the FOMC, Yellen discussed opinion polls, the “top 1 percent,” and wondered aloud about whether CEOs are overpaid. When it comes to policy, she at least explicitly ruled out trade barriers to address income inequality, but then moved to a persistent liberal hobbyhorse: government-funded early-childhood education (despite persistent data showing only temporary benefits of such programs) as well as more “investment” in education at nearly every other level, including job re-training.

Ms. Yellen seems unhappy that we do not redistribute income more aggressively, buying into known-to-be-misleading data about infant mortality and life expectancy. In short, Janet Yellen unsubtly implies that because the U.S. has not become more like Europe through the “legalized plunder” (as Bastiat put it) of some people’s money, babies are dying.

This is as political as economics can get.

If this is the mindset of the person likely to ascend into the most powerful banking job in the solar system, the credibility of the Federal Reserve as an independent entity focused on its “dual mandate” of maximizing employment while targeting inflation is at grave risk. (Removing the former of these mandates should be high on the to-do list of any responsible future president, not least because the two mandates can, and often should, be in direct conflict with each other. Additionally, the Fed’s ability to influence employment is very limited, especially in comparison to fiscal and regulatory policy.)

Unlike Congress, the opinion of which is irrelevant approximately 360 days of some years and 365 days during other years, a rational, mostly apolitical Fed is necessary to support the stability of our currency and of the world’s economic system. Many nations’ currencies are pegged to ours, and when the U.S. dollar weakens other major exporters including the European Union enter into an unstated but real and internecine race to the currency bottom.

(A weaker currency tends to benefit exporters because it makes prices appear cheaper to foreign buyers, but a currency must be weaker in comparison to something else, so it is nearly impossible for many currencies to “weaken” simultaneously. The fear of this sort of negative competition was a major driver of the recently-burst bubble in precious metals prices, especially silver which more than quadrupled in price from early 2009 to April 2011, before giving up half of those gains over ensuing months.)

When QE3 was begun over the objections of the vast majority of investment strategists and economists who said the move might goose markets but would not help the economy, some called it “QE Forever.” The fact that these warnings are seeming prescient, and particularly that they are seeming prescient because of politics and “bureaucratic capture,” represents a dark and ominous cloud on our nation’s fiscal horizon.

Anyone who is paying attention, and who doesn’t have an unstated ulterior motive of increasing the size, scope, and cost of government (the poster child being Paul Krugman), should be Yellin’ at the Fed at the top of his lungs — not that any of the addicted Hobbits in Washington, D.C. will listen.