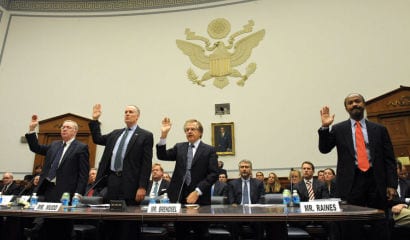 Politicians and the establishment media are weaving an epic tale of the events that froze the markets five years ago this month and led to massive bailouts of the biggest financial firms. Yet, their retelling of the financial crisis, to use a filmmaking analogy, leaves a lot on the cutting room floor — namely, the role of the government-sponsored enterprises (GSEs) Fannie Mae and Freddie Mac in fueling the subprime boom.

When Fannie and Freddie are discussed, their role is minimized. A recent USA Today editorial, for instance, conceded that some reform of the entities is necessary, but quickly added, “The two companies came late to the subprime party and didn’t cause the financial crisis.” The storytellers, quite simply, want nothing to distract from their narrative that the crisis was caused by rampant deregulation and the economy was “saved” by big-government rescues. But the data say otherwise.

As Peter Wallison, senior fellow at the American Enterprise Institute and a dissenting commissioner on the Financial Crisis Inquiry Commission created by Congress, put it recently in the Wall Street Journal, in September 2008, “[H]alf of all mortgages in the U.S. — 28 million loans — were subprime or otherwise risky and low-quality,” and of these, “74% were on the books of government agencies, principally the GSEs.” He adds, “We hear plenty about Wall Street rapacity but any discussion of the government’s central role in the disaster is neatly avoided.”

As for the GSEs coming to “the party” late, the GSEs actually designed, purchased, and sold loans with subprime characteristics as early as the 1990s, as Wallison, New York Times financial reporter Gretchen Morgenson, and lawsuits against GSE executives by the Securities and Exchange Commission, document.

One way to illustrate just how far the media narrative deviates from reality is through a variation of the pop culture trivia game, “Six Degrees of Kevin Bacon,” where the object is to link actor Kevin Bacon to fellow actors and actresses in six films or fewer. For instance, Kevin Bacon was in JFK with Jack Lemmon and Lemmon was in Some Like It Hot with Marilyn Monroe, so that places Kevin Bacon and Marilyn Monroe two degrees apart from each other.

Let’s try a similar game with the financial crisis, “One Degree of Fannie-Freddie.” The object is to link the private firms that the media designates as leading to the downfall of the financial markets with Fannie or Freddie — or both — in business transactions. As the game shows, the GSEs had co-starring or at least supporting roles providing invaluable assistance to bad actors in the private sector.

Countrywide Financial
Countrywide Financial and its founder and longtime CEO Angelo Mozilo have been cast as financial crisis villains, with good reason. Mozilo features prominently as a bad guy in Inside Job, a leftie documentary about the financial meltdown, and made Time magazine’s list of “25 People to Blame For the Financial Crisis.” Time proclaims that while Countrywide “wasn’t the first to offer exotic mortgages to borrowers with a questionable ability to repay them, its all-out embrace of such sales… did legitimize the notion that practically any adult could handle a big fat mortgage.”

All true, but Time and other media outlets neglect to mention that Countrywide had an essential partner in these mortgages — Fannie Mae. In fact, according to the New York Times‘ Morgenson (who stands virtually alone in the establishment media for thorough reporting on the GSEs’ roles in the crisis), Fannie actually recruited Countrywide to make these loans to help fulfill Fannie’s own “affordable housing” goals.

As Morgenson and co-author Joshua Rosner write in their book Reckless Endangerment, in 1998, “[Fannie Mae CEO] Jim Johnson had agreed to charge Mozilo’s company far lower guarantee fees than its rival on mortgages Fannie Mae bought from the company and sold to investors.” Morgenson also reports that over the following decade, Fannie “assiduously… pursued Mr. Mozilo and 14 of his lieutenants to make sure the company continued to shovel loans its way.”

In the late 1990s, Countrywide created a mortgage the company literally called Fast-N-Easy loan to sell exclusively to Fannie. A forerunner to the subprime loans of the coming decade, Fast-N-Easy, as Morgenson and Rosner note, “required no documentation of a borrower’s income or assets.” By 2004, Countrywide was Fannie’s top mortgage supplier, accounting for 26 percent of the loans purchased by Fannie.

Countrywide also kept key Fannie executives happy by supplying them with Countrywide’s now-infamous “VIP loans,” which contained massively discounted mortgage rates. An investigation by the House Oversight and Government Reform Committee found that Countrywide gave 27 employees a total of 153 of such loans. Countrywide also gave VIP loans to its chief defenders on Capitol Hill, including former Sen. Chris Dodd (D-Conn.), co-author of the Dodd-Frank financial “reform” of 2010 that left the GSEs untouched.

The “Bear precedent” set a market expectation that the government would not let a firm it deems “systemically important” fail. A strong case can be made that had Bear been allowed to fail, Lehman Brothers (more on it, later) may have never been at the breaking point in September 2008, because it would have deleveraged and sold assets much earlier, knowing that no bailout was coming.

In any event, in 1997 — more than a decade before it went bust — Bear began its exotic mortgage ventures, partnering with Freddie Mac to securitize low-income home loans mandated by the Community Reinvestment Act (CRA). A 2012 National Bureau of Economic Research study found that the CRA led to substantially riskier lending. The press release from the 1997 deal — excerpted by George Mason University economist Russ Roberts on the Cafe Hayek blog — claimed that this was “industry’s first public securitization of CRA loans.” Roberts added in a Wall Street Journal op-ed that, “[O]ver the next 10 months, Bear Stearns issued $1.9 billion of CRA mortgages backed by Fannie or Freddie.”

Bear Stearns also was the issuer of preferred stock for Fannie Mae. Fannie and Freddie also bought several mortgage-backed securities issued by Bear, which are the subject of a lawsuit brought by the GSEs’ regulator, the Federal Housing Finance Agency (FHFA). Fannie and Freddie officials are employing the Sgt. Schultz defense — that they “knew nothing” about the risks of default. (By the way, John Banner, who played Schultz on Hogan’s Heroes, can be linked to Kevin Bacon in three degrees. Banner was in The Prize with Paul Newman, Newman was in The Color of Money with Tom Cruise, and Cruise was in A Few Good Men with Kevin Bacon.)

Lehman Brothers
The story of disgraced Lehman Brothers CEO Richard Fuld loading up on risky mortgages and then looking for a Bear-like bailout when these hit the rocks has been told many times. Fuld has stayed out of the spotlight, so when he made one of his rare public appearances recently, he chose an interesting venue — a party at the Sun Valley, Idaho, mansion of Jim Johnson, former head of Fannie Mae and, as noted, close pal of Countrywide’s Angelo Mozilo (who was also at the party), according to Bloomberg Businessweek.

Fannie bought billions in commercial mortgage-backed securities from Lehman, and the two firms were also counterparties on derivatives contracts worth billions. As for Freddie, a March 2013 FHFA Inspector General report found that that the two firms “had extensive business relations. Lehman sold mortgages to Freddie Mac and also served as one of Freddie Mac’s investment bankers. Lehman underwrote common and preferred stock offerings for Freddie Mac as well as various debt securities offerings.”

Epilogue
As these “degrees” and other evidence show, the GSEs were a major cause of the crisis, but they were not the sole cause. Other factors included the related mandates of the Community Reinvestment Act, loose monetary policy, the embedding of an oligopoly of credit rating agencies into financial solvency regulations, and pro-cyclical mark-to-market accounting rules that exaggerated and exacerbated bank losses.

Yet the scariest part of this movie is that Fannie and Freddie are still around, ready to cause a financial crisis sequel. And they are more powerful than ever, thanks in large part to Dodd-Frank’s qualified mortgage rules, which burden private sector securitization but exempt the GSEs.

While the government-induced financial crisis could never have a Hollywood happy ending, rolling back Dodd-Frank as well as carefully phasing out Fannie and Freddie, along the lines of the House Financial Service Committee Chairman Jeb Hensarling’s (R-Texas) PATH Act, would allow the true good guys to get the economy going again.

But to choose the right ending, the storytellers must stop hiding how it all began.