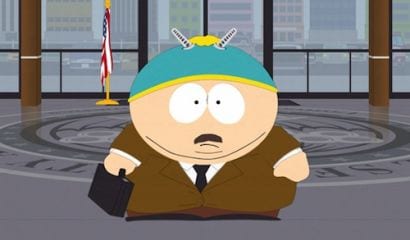 The crudest show on television is also the smartest.

The premiere opens with Kyle Broflovski objecting to frienemy Eric Cartman conversing loudly via speaker phone to another acquaintance. He corrects the boasts of athletic-field heroism made by the lazy coward. Cartman indignantly responds, “Kyle, this is a private conversation.” And that, in one scene, is the United States of 2013, a nation in which we make our business everybody’s business and then complain once anybody pries into our business.

Cartman, who tweets, blogs, and posts videos online, discovers that the government, like Kyle, has taken an interest in his private affairs. He vows to infiltrate the National Security Agency and expose their misdeeds. As the exhibitionist outraged at his voyeuristic government, the fat fourth grader embodies his fellow citizens.

When Cartman ominously warns, “The government is watching everything you do — always watching,” the more impressionable Butters imagines Washington the way some in Washington imagine themselves. Late at night, Butters prays to the government to watch over his friends and family. He asks Obama for a puppy.

Later, the blond-haired boy confesses his sins at the Department of Motor Vehicles (DMV), where he tells the confused clerk that he has already said fifty “Pledges of Allegiance” and one hundred “My Country ’Tis of Thees” — and watched “America’s Got Talent” twice. The government worker rids himself of the young pest by telling Butters to sing James Brown’s “Living in America” a thousand times for penance.

The boy spreads the good news of the government by handing out DMV literature door-to-door, Jehovah’s Witness-style. He evangelizes for a growing cult that casts government as God. “Don’t you see there’s no other way,” Butters explains to Cartman, by now a dejected NSA whistleblower. “Just let the government into your heart.”

Before the feds invaded our email, phone calls, and text messages, we broadcasted our private conversations to anyone bored enough to find them captivating. People lacking boundaries can’t recognize violations. So we countenance, nay, we welcome what our ancestors would have interpreted as provocation.

If Uncle Sam has become Peeping Tom, Joe Six Pack has become the flasher in the trench coat.

The muted outrage over outrageous intrusions by the feds — PRISM, the Mail Isolation Control and Tracking program, leaking the private details of political opponents’ tax returns, and Justice Department targeting of journalists as national security risks — can be better understood by observing the voluntary information dump Americans make hourly on Twitter, Facebook, Tumblr, and YouTube. Before the government wanted to know everything about everybody, everybody wanted everyone to know everything about them.

Are we flattered or insulted by the NSA’s inordinate interest in our mundane affairs?

Cartman represents the contradiction of the American people, at once TMI and MYOB. Butters, in his expectations of an omniscient and omnipotent state, personifies us too. And curmudgeonly Kyle, in his annoyance at hearing invasive cellular conversations loud enough to make him pine for the return of telephone booths, speaks for a segment of the citizenry, as well.

“Nobody wants to hear your conversations,” Kyle explains. “You’re not that important.” This is wisdom worth pondering — for the tax-funded voyeurs at the NSA and for the exhibitionists broadcasting their private lives on public forums.

We’re not that important. More importantly, we’re just not that interesting.