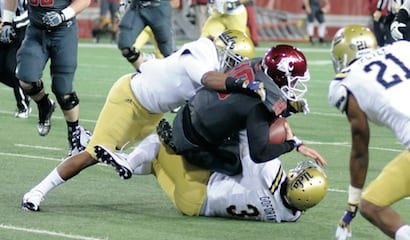 JAMES MADISON, to my knowledge, never played tackle football. I doubt he would have made the JV squad: a slim 5’4″, he lacked the taurine figure necessary even for a kicker on any self-respecting team (although his fellow convention delegate Gouverneur Morris—pre-1780—may well have been a first-round pick). Like many a specimen of unremarkable physical character and delicate health, Madison tended toward scholarly pursuits, distinguishing himself in studies of the classics and law (only a merciful two centuries’ gap saved him from relegation to the “nerd” caste). Under the guidance of his razor-sharp intellect, both the Constitution and the Bill of Rights were created.

It was in defense of the former during its ratification process that Madison co-wrote The Federalist Papers, from which has since been etched onto the stone tablets of American liberty: “There are two methods of curing the mischiefs of faction: the one, by removing its causes; the other, by controlling its effects.”

Why Madison’s words on the viability of a constitutional republic mean anything to the contact sport so beloved by modern Americans might seem somewhat unclear. Yet to my mind, these words spell out exactly the approaches one can take. How best can we cure the mischiefs of tackle football: by removing it altogether, or by controlling its effects?

No one will deny that football is more than a little savage. In fact, it’s downright primal: Men pursue a glorified animal hide, ramming each other with all the wild fury of bighorn sheep defending their demesnes. Injuries are both disturbingly commonplace and very often irreparable. A star player’s career can end in the span of 20 seconds, while unfazed spectators, eager for the game to continue, watch him hobble from the field of battle. In this way, the sport is not unlike the gladiatorial contests that so entertained the ancient Romans. Indeed, this resemblance has been cited by many a critic. Such games, these critics claim, with their emphasis on deadly combat, may have entertained the Romans of past millennia, but we are a civilized nation, whose people have evolved far beyond such vulgar appeals.

This argument, however, is completely without basis either in history or in human nature. That men 2,000 years before our time enjoyed watching highly trained slaves dressed like fishermen and Gauls stab and hack each other to death with tridents and daggers is merely a colorful anecdote in the history of human entertainment; that men today enjoy watching a variation on the same theater—take away the weapons and the popular vote on the outcome—speaks volumes about the unchanging nature of mankind. The Romans did not invent tackle football, or surely fanatical Commodus would have leapt into the arena to chase the pigskin himself and invented his own end zone dance. Nevertheless, they happened upon a formula of entertainment which succeeded far beyond the needs of panem et circenses. Some element of the sport touched upon an indelible facet of the human consciousness. The idea of men pummeling each other after some mutually desired prize—whether the glory and freedom of the ancient gladiator or the fame and fortune of a (however brief) professional football career—compels us to watch.

Far be it from this humble writer to determine the reason for this phenomenon; the evidence is justification enough. The whole of civilization has sought such entertainment: wrestling men appear among the cyclopean figures of Egyptian friezes, crowds in Georgian Britain cheered on both men and women in organized fights at village fairs. If tackle football were banned, my presumption is that people would find, invent, or modify another sport along similar lines. When the human mind wants to be entertained in a certain way, it will be entertained—attempts to control it notwithstanding.

ON A RELATED LINE OF ARGUMENT, some may call for the elimination of college football because the institution is corrupt. Schools seek the most promising of high school talent, luring these players with scholarships unavailable to non-sporting students; prospective players, seeing perhaps their only shot at the fame and fortune of a national league career, nominally enroll but focus entirely on their sport. (What prospective player wouldn’t, when professional contracts run into the tens of millions?) A winning team draws alumni donations, which starts the cycle all over again. The schools seem to place undue focus on sport, undermining academics.

Yet I would challenge anyone to name an institution of entertainment in human history that has remained untouched by lucre. In the glory days of Rome, when the Circus Maximus was a thriving racetrack (and not just a strip of grass surrounded by a hard- packed oval of dirt, as it is today), citizens bet huge sums on the Reds, Greens, Blues, and Whites. The citizens of Rome surely enjoyed watching the quadrigae speed around the track, yet no evidence of this would have survived had not betting on the outcomes of races been as popular as the races themselves.

Money is indelibly tied to any remotely popular entertainment; betting allows the spectator to participate in the risk of high-contact sports without injuring himself. Men do not enter into cycles of what may be called “corruption” simply because the object of interest is corrupt; excitement and the prospect of financial gain draw investors to the sport. If a college subordinates academics to football—at least financially—it does so to enhance its own glory. An alumnus likes to mention his alma mater with pride, and donates so that he can continue to do so. That tackle football has become entangled in a Gordian knot with financial investment is a symptom of its popularity, not its corruption. To abolish it altogether would be an act both damnable in its extinguishing of liberties and futile in its naïve belief that men will not seek substitute entertainment.

So tackle football is here to stay, and though its critics may gasp in apoplectic shock when I say it, this is good news for American liberty. Athletics has advanced from slaughter for fame and glory to ritual battle for fame and glory. If football never evolved past this point, society could well call the game a successful example of progress. Of course, we could go further to control the effects of tackle football’s apparent mischief: Alumni could take a stand against donations to schools’ football programs, students could choose to attend schools with no football programs at all, and spectators could switch their attention to another sport. But one could also argue that tackle football is a celebration of freedom wrapped in a troglodytic sport.

If young players undertake a sport that brings so much danger and such fleeting fame, they have engaged their liberties as much as any child of the First Amendment. If schools want to invest money in tackle football over academics, they are supporting a sport that harms no one intentionally and brings entertainment to millions of citizens. If these same citizens wish to sit in freezing weather and cheer until their voices are hoarse for a form of play combat as old as the Seven Hills of Rome, they ought to be applauded for exercising their freedom of choice.

James Madison may never have made it to the frozen tundra of Lambeau Field, may never have executed a perfect spiral pass, and may never have watched the ball sail gracefully between the colossal golden sentinels for a perfect field goal. But were someone to tell him about modern American football, I have no doubt that he would nod his wholehearted approval.