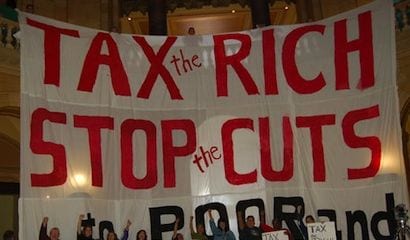 Good-bye, “tax cuts for the rich.” If the legislation passed on New Year’s Day means nothing else, it should at least put an end to a rhetorical trope that Democrats have been pounding for the past decade. This has been the essence of the Democrat party’s economic message since the enactment of the “Bush tax cuts” in 2002: Everything that is wrong with the economy — and with the federal budget — can be attributed to the fact that the rich aren’t paying enough taxes.

As a “fact,” of course, this fell far short of actually being true, but when did Democrats ever let facts and truth get in the way of an effective campaign message? After senators worked past midnight Monday to enact their fiscal-cliff deal, a New York Times headline proclaimed the joyous news: “Senate Passes Tax Increases on Wealthy Americans.” Thank you, God, and thank you, Harry Reid. After some grumbling and dithering, the House voted late Tuesday to pass the bill, and so taxpayers earning more than $400,000 will see their rates rise. The fearsome dragon of the “Bush tax cuts” has at last been slain, even though we suspect that this will not actually be the “happily ever after” ending of the fairy tale.

Especially in the “swing states” during last year’s election campaign, voters heard this Democrat message so often, in so many iterations, that it must have seemed like the universal panacea, a sort of snake-oil miracle cure. Whatever your problem — obesity, dandruff, halitosis, chronic flatulence — the Democrats promised to cure it by finally forcing the rich to Pay Their Fair Share. This message proved to be amply satisfactory to people too stupid or too lazy to bother themselves with arithmetic. Perhaps it is not entirely a coincidence that comparatively few of those math-deficient voters are themselves rich.

Since their Election Day catastrophe, Republicans have been wringing their hands over “demographics” (by which they mean black and Hispanic voters), but exit-poll data show that economics may explain more than demographics. Barack Obama spent much of the campaign espousing a message that pitted “the rich” against “the middle class,” but in the end, a majority of the middle class actually voted for Mitt Romney. While the Republican challenger got 53 percent among those earning more than $50,000 a year — who comprised 59 percent of the electorate, according to exit polls — Obama won by piling up massive margins among the poor and those struggling at the lower edges of middle-class status. Although voters making less than $30,000 a year were only 20 percent of the electorate, Obama got 63 percent of their vote, and he got 57 percent of those with annual incomes between $30,000 and $50,000. Among the Seven Deadly Sins, not even Lust is more important than Envy when it comes to electing Democrats.

The effectiveness of Obama’s class-warfare message, pounded home with a barrage of campaign ads in key swing states, can be seen in state-by-state comparisons. In Missouri, which Romney won with 54 percent of the vote, the Republican got 60 percent among voters earning $50,000 or more, while Obama got 60 percent of those with incomes of $30,000 or less. In the battleground state of Ohio, however, Romney’s share of the over-$50,000 vote was smaller (54 percent), Obama’s share of the under-$30,000 vote was larger (63 percent), and the result was that the Democrat won Ohio with 51 percent. The comparison of these two Midwest states is particularly helpful in understanding why “demographics” cannot adequately explain the GOP’s woes. Romney easily won Missouri, where the population is 81 percent non-Hispanic white, but narrowly lost Ohio, where the population is also 81 percent non-Hispanic white. These different results cannot be explained by reference to trends among black and Latino voters. The real difference was that Ohio voters were more amenable to — and, thanks to the Democrat campaign-ad blitz, much more exposed to — Obama’s message of economic envy that blamed “the rich” for everything wrong with the country.

It did not help the Republicans that their candidate was himself rich, easily caricatured as the living embodiment of everything the Democrats were telling voters they should hate. Nor did it help that the Democrat message was endlessly amplified by that slice of “the rich” who earn multimillion-dollar salaries in the media. MSNBC’s Chris Matthews ($5 million a year) was praised last week as a “statesman” and a “model” by the liberal network’s president, and we may take some small comfort in the knowledge that Matthews will be paying more taxes in 2013.

Or maybe not. Wealthy liberals like Chris Matthews can afford accountants and investment managers whose specialty is minimizing the tax bills of their elite clientele. The political value of higher taxes on “the rich” as an egalitarian gesture doesn’t necessarily mean that Matthews and other multimillionaire progressives will actually pay an extra dime to the IRS. The ability of the rich to avoid taxes provides the obverse proof of supply-side theory, validating the Laffer Curve and making it impossible to project with certainty how much additional revenue any particular tax increase will produce. Supporters of the Senate bill said the Congressional Budget Office estimated that the fiscal-cliff deal would mean an extra $620 billion for the federal Treasury over the next decade, but such an estimate is not an ironclad guarantee.

Sen. Rand Paul explained this in a New Year’s Eve floor speech before he voted against the deal. “Mark my word, you will raise tax rates and you’ll feel good because you went out there and you got those rich people,” the Kentucky Republican told his colleagues before they voted 89-8 in favor of the bill. “You campaigned against rich people and you got enough envy whipped up in the country, and you’re going to stick it to those rich people. But guess what? You may not get any more revenue. You may not get any more economic growth. But you can say, ‘I stuck it to the rich people.’”

Thus did Democrats relieve America of the Bush-era “tax cuts for the rich” that provided an organizing rationale for Obama’s re-election campaign. Of course, Republicans were able to force something of a compromise, so that the deal will not return us to Clinton-era tax rates. Democrats will therefore be able to find new opportunities for future demagoguery against those evil rich people who have become the all-purpose scapegoats of the Obama Age.