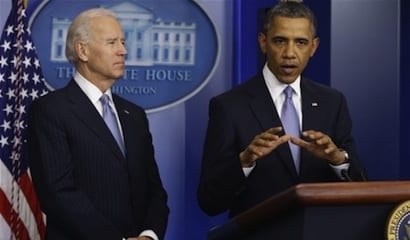 The resolution to the fiscal cliff crisis was fittingly perverse, containing the very prodigal spending and denial of looming deficits that caused it. Washington never fails to use a crisis to compound the underlying elements of the crisis.

This is what passes for bipartisanship in a demagogic age. Pols calculate that the full effects of a crisis won’t be felt until they’re safely out of office. So they don’t mind making it worse while pretending to solve it.

Obama’s easy triumph — he only had to shave a few days off his Hawaii vacation — illustrates that tax-and-spend liberalism has become the norm and only “unrealistic” Republicans now dissent from it. For all the blather about philosophical polarization, no real debate occurred, as the media whittled it down to a fatuous lesser-of-two-evils choice: bad liberal idea A versus bad liberal idea B. Either accept one of the bad ideas or catastrophe will result.

Scaring Republicans into bad policy through such hectoring is the left’s forte and Republicans simply don’t have the courage or conviction to call the left’s bluff. Both America’s economy and politics look European at this point, as the debate narrows down to two parties quibbling over the size of a crumbling nation’s tax hikes and spending increases, not whether they should occur. A Rand Paul may stand up and point out the obvious — that the catastrophe has already arrived and that such negotiations amount to rearranging deck chairs on the Titanic–but he is quickly drowned out by more “balanced” GOP voices.

Bad policy is good politics and good policy is bad politics — that’s the reigning mindset of establishment Republicans. But it is very myopic. Parties that seek to retain power at the expense of principle usually end up with neither. And in the meantime they damage the country by colluding in the errors of their opponents.

This bipartisan herd was led appropriately enough by the buffoonish Joe Biden, whose smug smile on Tuesday night captured the emptiness and delusion of American politics. The sales pitch for the bill was a lie on every level. Instead of erasing debt, it adds trillions to it over a decade, according to the Congressional Budget Office. Instead of encouraging economic growth, it punishes job creation and investment. Instead of ending congressional boondoggles, it became an occasion to indulge them.

No more Solyndras, vowed Republicans during the presidential campaign. But Boehner-led Republicans just voted for a bill that contains billions of dollars in subsidies for the “renewable-energy” industry.

And so much for their vow never to pass hastily assembled bills stitched together by lobbyists. Like Nancy Pelosi, they believe in passing a bill to find out what is in it. Plenty of pork, as it turns out, according to the Washington Post: “The owners of auto-racing tracks got one that will cost $78 million. A $1 million break will help coal-mining operations on Indian lands. Another oddball provision dealt with excise taxes on imported rum, which the U.S. government mainly funnels to the territorial governments of Puerto Rico and the U.S. Virgin Islands.”

So once again a problem caused by frivolous spending is “solved” by more of it. Obama’s euphemism for pork is “investment,” which he sternly promised to protect in his Tuesday speech. He feels cramped by the debt ceiling and demanded that Republicans raise it without impinging upon his new spending plans. He is investing in everything from wind farms to electric cars to now even electric scooters with two or three wheels, according to the Post.

The bipartisan herd also made sure to help the dairy industry by continuing milk and cheese subsidies. Nor did they forget the filmmakers of Hollywood, who will receive subsidies for making movies in the U.S.

What a sham. Last year Wolf Blitzer asked Republican presidential candidates during a debate if they would accept one dollar in tax increases in exchange for ten dollars in spending cuts. He asked the wrong question. It turns out that the GOP will accept almost no spending cuts for billions in new taxes.