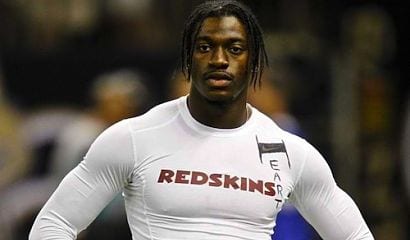 Quarterback Robert Griffin III, who leads the Washington Redskins on Sunday to their first home playoff game in more than a decade, isn’t an ordinary rookie, according to teammate DeAngelo Hall. According to ESPN commentator Rob Parker, Griffin isn’t an ordinary African American.

“Is he a brother, or is he a cornball brother?” Parker infamously asked last month. It’s strange how the question on nobody’s mind suddenly becomes the question on everybody’s mind once a cretin appears in front of a television camera. “I keep hearing these things,” Parker continued. “We all know he has a white fiancée. There was all this talk about he’s a Republican, which, there’s no information at all. I’m just trying to dig deeper as to why he has an issue.”

If only Griffin had executed dogs or used the nom-de-herpes “Ron Mexico” he might have escaped Parker’s racial naughty list as deftly as he escapes defensive ends. Instead, he graduated from Baylor a year early, places God at the forefront of his life, and conducts himself as a gentleman on and off the field.

Fifty seasons after the Washington Redskins became the final NFL team to integrate, there’s still an ugly expectation for blacks to behave badly. Few common denominators exist between ESPN’s Rob Parker and the late Redskins owner George Preston Marshall. But the notion that African Americans conform to the stereotypes assigned to them seems one that this odd couple could have agreed upon.

Jeff Davis, biographer of the NFL’s most important commissioner, noted in Rozelle: “When he formed the Redskins in the ’30s, Marshall, an avowed racist who never changed his views, drew the color line and, in league councils, forced his fellow owners, especially [Chicago’s George] Halas and Pittsburgh’s Art Rooney, to not hire black players.” Davis perhaps lets the other owners off the hook here. Surely they had free will to defy Marshall, particularly when he was a neophyte owner in the 1930s. But it’s certainly true that Marshall spearheaded the de facto ban on African Americans that governed the NFL from 1934 through 1945.

Racial snobbery is so unlike football. African-American players were present at the creation of the NFL. Native American hero Jim Thorpe served as the league’s first commissioner. Fritz Pollard, who led the Akron Pros to the inaugural NFL championship in 1920, became the league’s first African-American coach in its second season. By way of comparison, the National Basketball Association saw its first black head coach in 1966 and Major League Baseball waited until 1975 for a black manager.

Long after the Rams reintegrated the league as a condition of its lease of the Los Angeles Coliseum in 1946, Marshall stubbornly refused to sign black players. When a reporter queried the owner in 1960 about when he might desegregate his roster, Marshall quipped, “We’ll start signing Negroes when the Harlem Globetrotters sign whites.” Alas, the Globetrotters won while the pale-faced Redskins played the Washington Generals of the NFL for many, many years.

In 1963, a year after the Redskins integrated, Martin Luther King delivered his “I Have a Dream” speech just a few miles west of DC Stadium. A half century later, it’s strange not just that the speech’s modest sentiments still evoke controversy but who finds them controversial.

Griffin unwittingly stirred this maelstrom by conceding that he preferred to be judged as an individual rather than as a member of a group. “For me, you don’t ever want to be defined by the color of your skin,” Griffin remarked. “You want to be defined by your work ethic, the person that you are, your character, your personality.”