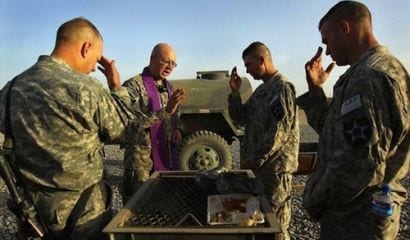 One of the items on Obama’s second term agenda is to root out traditionally Christian chaplains from the military. He sees them as bigots unworthy of conscience protections. Like Chick-fil-A, they don’t uphold Obama’s “values.”

Obama’s mouthpieces in the military have already blurted this out. In 2010, Admiral Michael Mullen told a Christian chaplain who opposed the repeal of the “Don’t Ask, Don’t Tell” policy that “If you cannot get in line, resign your commission.” That same year Lieutenant General Thomas P. Bostick, the Army’s deputy chief of staff in charge of personnel, said military members who dissent from Obama’s gay rights agenda should “get out.”

“Unfortunately, we have a minority of service members who are still racists and bigoted and you will never be able to get rid of all of them,” he said, as reported by the Washington Times. “But these people opposing this new policy will need to get with the program, and if they can’t, they need to get out.”

Pentagon officials go through the motions of saying that military chaplains still enjoy religious freedom. But this claim grows ever more lawyerly and narrow. When Defense Department Counsel Jeh C. Johnson testified before Congress about the implications of the “Don’t Ask, Don’t Tell” policy’s collapse for religious freedom, he said that it would not affect what a chaplain said in “the religious context.” In other words, chaplains would be punished for objecting to Obama’s gay rights agenda anywhere outside of a pulpit.

But even that feeble promise isn’t worth taking seriously, since Obama’s military officials have already regulated sermons from the pulpit. Last year they forbade Catholics chaplains from orally criticizing the HHS mandate, permitting only a printed objection to it. How long before the Army’s Office of the Chief of Chaplains requires vetting of all sermons on homosexuality?

At Maoist-style reeducation sessions, soldiers and chaplains have already been told that “You remain obligated to follow orders that involve interaction with others who are homosexual even if an unwillingness to do so is based on strong, sincerely held moral or religious beliefs.”

Also, it is not even clear if military chaplains control who speaks from their pulpits. It is likely that they will have to turn them over to other ministers preaching at gay nuptials whenever the Pentagon so decrees . A September 2011 memo from DOD general counsel Johnson indicates that any chapel space on a military base can be appropriated for gay weddings, which is a blatant violation of the Defense of Marriage Act. “Determinations” of chapel space, he wrote, “should be made on a sexual-orientation neutral basis.” By 2011, in open defiance of DOMA, the military authorized ministerial training for gay marriage ceremonies on military bases.

Considering himself very generous and tolerant, Obama has said that he would never force a priest or minister to preside at a gay wedding. This is an absurdly low guarantee of religious freedom. But there is no reason to suppose that he will even honor that low standard, given that he sees such a stance as discriminatory. In time, pressure, both direct and indirect, will be brought to bear on non-participating ministers. Even their silence will be seen as a hate crime. Careers will rise or fall depending upon the level of one’s participation in the promotion of gay rights.

The “LGBT” community will no doubt frame the issue as one of “access”: How can a gay soldier have a right to marry on a military base if military chaplains are free to refuse to marry them? At last year’s first gay wedding at West Point, the lesbian couple complained to the press that none of the ministers on campus agreed to marry them, so they had to fly a chaplain in from elsewhere.

Using the “access” argument, Obama scotched Bush-era conscience protections for pro-life Christian doctors working at federal hospitals. They are required to distribute abortifacients whether they like it or not. When the time is right, Obama will use the same “access” argument to require ministerial participation in gay weddings.

Keeping this option open, Obama last week announced that he will disobey a provision protecting chaplains which Republicans included in the national defense authorization bill he signed. The provision states that the religious views of a soldier cannot be “the basis of any adverse personnel action, discrimination or denial of promotion, schooling, training or assignment,” and that chaplains cannot be forced “to perform any rite, ritual or ceremony that is contrary to the conscience, moral principles or religious beliefs of the chaplain.”

Just as Obama refuses to enforce the Defense of Marriage Act, so he promises to ignore this provision, as he said in his signing statement, calling it “unnecessary and ill-advised.” He added that he will not let it slow down his gay-rights agenda: “My Administration remains fully committed to continuing the successful implementation of the repeal of Don’t Ask, Don’t Tell, and to protecting the rights of gay and lesbian service members; Section 533 will not alter that.”

Obama won’t promise to protect these military chaplains for the simple reason that he views them as the moral equivalent of segregationists. Chai Feldblum, one of Obama’s commissioners on the EEOC, has written that the state, acting in the name of nondiscrimination, enjoys an absolute right to violate the religious freedom of Christians: “Just as we do not tolerate private racial beliefs that adversely affect African-Americans in the commercial arena, even if such beliefs are based on religious views, we should similarly not tolerate private beliefs about sexual orientation and gender identity that adversely affect LGBT people.”

That’s the essential view animating all of Obama’s policies related to Christianity. Under this secularist dogmatism, Christianity has no public rights. Freedom, as Feldblum puts it, is a “zero sum game” in which the religious deserve to lose.