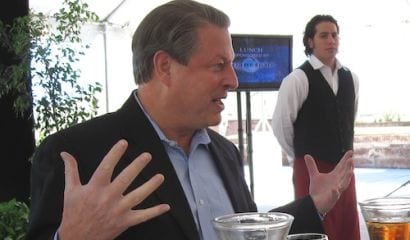 Let us in particular praise Al Gore because, well, because he’s just so darned human.

Starts out as slightly wacky scion of famously wacky political/moneyed family in Tennessee. Big reputation as irascible and hard to deal with in the U.S. Senate. But hooks himself up with the ultimate smooth talker, Bill Clinton. Gets to be Vice President. Was sure that he could bully his way into the White House. Literally physically menaces George W. Bush in 2000 debate (attempt to win votes of unlimited martial arts fans).

But instead of stealing the election as he thought he could and would, he was stopped in his tracks by Karl Rove in Florida.

Now, he becomes the world guru of green power. He preaches day and night about how burning oil and gas will kill the planet. Makes hundreds of millions of dollars from “alternative energy” projects, usually subsidized by the taxpayers — which means subsidized by the stockholders of oil companies — you and me and every other person in this country who has a pension.

For his heroic service to our planet, for fighting the evil powers that are choking mother earth by burning oil and gas, he receives the Nobel Peace Prize. (Later awarded to Barack Obama for… well, no one knows what for… I’ll get back to you on that.)

Two years ago, roughly, starts a cable TV channel to advance progressive causes and green energy. The channel, “Current” is a total and utter commercial flop. Just a complete zero. It has some great people, like my pal, Eliot Spitzer, but it loses money fast.

Then, along comes the Emir of Qatar, a small country in the Persian Gulf that is a prodigious producer of fossil fuels, especially natural gas, but also oil. He has founded some years earlier a worldwide cable channel called Al Jazeera. It is extremely well funded and has many bureaus all over the world. It is not exactly or explicitly a pro-terrorist entity. But it has been known to celebrate terrorists, even those who kill four year old Israeli girls by bashing their heads against stone. (See Monday’s superb column by Gordon Crovitz in the WSJ on this subject.) It is certainly not an enemy of fossil fuels.

The Emir or his employees want a presence in the U.S. So, there’s Current which has virtually no viewers ( typical day part — 23,000 ) but which appears on many cable systems.

The Emir buys Current from Al Gore and his fellow players for roughly $500 million — or about $22,000 per viewer — a sum never even approached in a cable TV deal before. Al Gore will get about $70-100 million.

And giving a network that is often (not always) friendly to terrorists a foothold on the cable? Well, that 9/11 stuff was over 11 years ago, man. And besides, money is what talks. Blood dries quickly. Money is evergreen, right?

The terrifying thought, the one that really makes me gasp, is that this man, this very human Al Gore, was almost President. Time for a prayer of thanks for the gift of Karl Rove. Just think about it… this guy could have been President!

Luckily, now we have a President who just appointed a man who voted not to sanction Iran for making a nuclear bomb, one of only two out of 100 in the Senate, who sneers at “The Jewish Lobby” (not the Israel Lobby, the “Jewish Lobby” — and here, I am indebted to Bret Stephens, also of the Journal, for pointing out the important difference), and who wants America to abandon a leadership role in the world. Luckily, we have a President “in the mainstream” who just appointed Chuck Hagel, another fellow “in the mainstream,” to be Secretary of Defense… and that appointment was heartily endorsed by the Foreign Minister of Iran — part of a government that does not believe Jews are even human beings, that believes it is God’s will that Iran KILL EVERY JEW ON THE PLANET. Yes, that’s what a mainstream appointment this is. Hagel is endorsed by a government that believes Jews are not human.

Can this possibly even be happening? It can be and it is.

I will just close on this terrifying note: A man who knows friends of Mr. O says that his goal is to be the first ex-President to make a billion dollars. Let’s see… who has unlimited money and likes to spend it on retired high-ranking Democrat politicians?