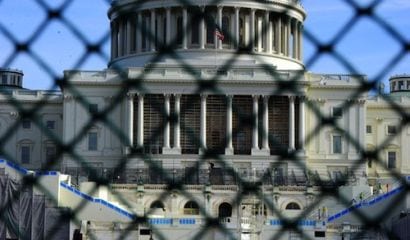 Liberals booed God at the Democratic National Convention in Charlotte last year after skittish party officials reinserted a mention of him in the platform. Nothing has changed since then. The latest secularist push of the party is to remove God from the inauguration. Prominent liberals are questioning the use of the Bible for the presidential oath and the use of prayers in the ceremony.

They have already made some progress in their demands. In 2009, Obama upset them by selecting vaguely conservative pastor Rick Warren to deliver the invocation. But this year Obama has chosen a non-minister and unimpeachably liberal figure to deliver it — the widow of Medgar Evers.

Obama’s decision to go outside of the clergy for the invocation, which is a historic first, met with the approval of the chattering class. They felt that that would give a nice lowest-common-denominator touch to the proceedings. No need to bring in the clergy unnecessarily. They were also pleased to hear that Obama named a Cuban-born homosexual as the inaugural poet and asked the Gay and Lesbian Band Association to march in the parade.

But Obama stumbled badly in their eyes in his selection of a pastor to deliver the benediction — Atlanta’s Louie Giglio. Last week Obama hastily corrected his error after liberal activists ferreted out a sermon Giglio delivered in the 1990s objecting to the homosexual agenda. Giglio, recognizing the seriousness of his thought crime, meekly accepted his banishment, abjectly noting that he hadn’t repeated those remarks in over a decade.

Giglio’s presence threatened the “diversity” of the event, agreed the Obama administration. George Orwell would have enjoyed the selection of that word for strict uniformity of thought. Who will replace Giglio? Liberal websites and gay groups quickly drew up a list of “gay-friendly” clergy to help the White House. Numbered on the list was Fr. Jim Martin, a Jesuit who serves as the Colbert Report’s “official chaplain. Others suggested that the White House tap an atheistic astronomer or physicist for the duties. After all, why would Obama need God’s blessings? Doesn’t that already imply a violation of modern America’s understanding of itself?

Indeed, the Giglio flap just reminded liberals of the odious theistic traditions that still cling to the inauguration, prompting them to ask: Why have a benediction at all? Why invite clergy to the stage in the first place? And why should the president swear his oath with his hand placed on the Bible?

MSNBC’s Lawrence O’Donnell, who sees the Bible as hate literature, considers the spectacle of Obama placing his hand on it “absurdist.” He should place his hand on something he truly honors, like the shoulder of one of his daughters, argues O’Donnell. To swear an oath on a risible and racist book, he continued, suggests a lack of seriousness.

Lost on O’Donnell is that Obama doesn’t believe in the Constitution any more than he believes in the Bible. So the oath is absurdist from the start. But O’Donnell is right that Obama doesn’t honor the Bible, a concession liberals usually don’t like to make. Unlike the Koran, which he has lavishly praised as a holy book, Obama considers the Bible flawed and in need of modern revision. It is not as inerrant in his eyes as the platform of the Democratic Party. Obama has called some of St. Paul’s writings “obscure” and mocked passages from the Old Testament. (Notice that liberals no longer try to spin the Book of Leviticus as a condemnation of inhospitality, not homosexuality. O’Donnell acknowledged that Giglio got in trouble for simply “quoting the Bible” correctly. The left’s contempt for the Bible has never been more open.)

While Obama agrees with O’Donnell that the Bible is hate literature, he is not yet ready to drop it from the ceremony. He prefers to turn the heat up on the frogs a little more slowly. Moreover, he likes the syncretistic blending of old and new in the baptisms of modern liberalism. He finds the appropriation of religious symbols for his own purposes useful.

Most revolutionaries do. Even Napoleon invited the clergy to his coronation, though he made sure to give them poor seating, as they passively watched the leader crown himself. Modern liberalism is a continuation of such godless self-coronations, but the need to dupe the public requires that it move more slowly than the O’Donnells like.