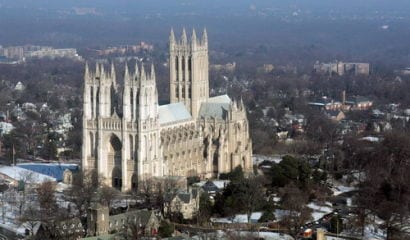 Is the Washington National Cathedral the spiritual center of the nation? In the mind of the liberal Episcopal cathedral’s new dean, it should be.

Such an assertion would surprise many of America’s churchgoers, the vast majority of whom are not even Oldline Protestants, let alone Episcopalians. But since assuming leadership of the Cathedral in October, Dean Gary R. Hall has frequently spoken of the church’s role as being “at the center” of American public life. Hall wants to raise the cathedral’s profile as not just a center of worship, but as an organized political advocacy center on a host of liberal issues.

Unlike some of his predecessors, Hall is not content to host conversational forums with authors and poets or preside over high-profile funerals like those of Gerald Ford and Neil Armstrong. From calling in December for new firearms restrictions, to announcing last week that the massive gothic church is available for gay weddings, Hall embraces liberal causes as easily as he dismisses traditional Christianity.

Prior to arriving at the Cathedral, Hall served briefly as a parish rector in Michigan. Before that, he served as dean of the Episcopal Church’s Seabury-Western Seminary in Evanston, Illinois. Like other struggling Episcopal seminaries, Seabury sought to alleviate its precarious finances by offloading properties. Under Hall’s tenure, Seabury sold its entire campus for $13 million to neighboring Northwestern University, all while sending out cheery press releases about the swiftly declining school “embodying our vision by becoming what’s next in a seminary.” The school no longer offers a Master of Divinity and has partnered with another Episcopal seminary in Ohio, no doubt with a look towards being merged out of existence.

Despite having freshly arrived from a failed seminary and a parish that by Evangelical or Roman Catholic standards would be viewed as somewhat small, Hall clearly has feelings of grandeur about his new office, seeing the National Cathedral as the center of American religious life.

Previous generations of liberal Episcopal clergy often spoke in layers of obfuscation; discovering the heretical teaching buried in their writing and preaching required hours of decoding. Hall represents a younger generation of liberal Episcopalians who resemble nothing so much as Unitarian Universalists decked out in stoles and surplices; they are quick to denounce those who advocate historic Christian teaching—especially moral teaching—as intolerant perpetrators of injustice who must be silenced.

In an October interview with the Detroit Free Press Hall announced that he is, “not about trying to convert someone to Christianity. I don’t feel I’m supposed to convert Jews or Muslims or Hindus or Buddhists or Native Americans to Christianity so that they can be saved. That’s not an issue for me.”

Hall was also forthcoming about the fact that he finds common cause with those who do not profess a faith in Jesus Christ.

“I have much more in common with progressive Jews, Muslims, Hindus and Buddhists than I do with certain people in my own tradition, with fundamentalist Christians,” Hall declared. “The part of Christianity I stand with is the part in which we can live with ambiguity and with pluralism.”

Perhaps unsurprisingly considering his background, Hall has brought politics to the forefront at the National Cathedral, already a liberal congregation that has hosted anti-Israel film screenings and new age worship seminars. In December, the cathedral almost immediately issued a press release following the Newtown, Connecticut shootings, in which an upcoming Sunday sermon calling for firearms regulation was promoted. In his sermon that weekend, Hall dismissed calling the shooter “evil” as “reflexive” and dehumanizing. Instead, Hall touted a political rather than a spiritual solution.

“Our political leaders need to know that there is a group of people in America who will serve as a counterweight to the gun lobby, who will stand together with our leaders and support them as they act to take assault weapons off the streets,” Hall sermonized. The dean advised that the best way to mourn Newtown’s victims is to “mobilize the faith community for gun control.”

The following month, Hall explained how a decision to conduct same-sex marriage is about more than just cathedral policy; it is also a move to influence the country.

Like other Episcopal congregations that have authorized same-sex marriage rites, the cathedral has issued a series of guidelines to alleviate concerns that the church is not serious about marriage, even as it unilaterally redefines it contrary to the way it has been historically understood throughout Christendom:

At least one person in the couple, therefore, must have been baptized. Only couples directly affiliated with the life of the Cathedral—as active, contributing members of the congregation; as alumni or alumnae of the Cathedral schools; as individuals who have made significant volunteer or donor contributions over a period of time; or those judged to have played an exceptional role in the life of the nation—are eligible to be married at the Cathedral.

Those who fret about the National Cathedral becoming the gay marriage equivalent of a Las Vegas wedding chapel can rest easy: couples seeking marriage must actually be involved in the Cathedral – unless they are “significant” donors.

Hall’s assumption of the deanship comes at a time when the National Cathedral and the Episcopal Church as a whole face both increasingly straitened finances and declining attendance. Doubtless his attempts to make the cathedral a focal point for the Episcopal Church’s liberal national agenda have their roots in his own well-documented theological radicalism. But there is another, concurrent explanation for Hall’s efforts, one, I might add, very much in keeping with his church’s historically patrician status: by sermonizing about gun control and being first in line to bless same-sex unions, Hall is keeping the doors of the Cathedral open to well-moneyed potential donors whose commitment to liberal nostrums like homosexual marriage might otherwise trump their Christian convictions when tax time comes.

Some things never change. The Bible and the 1928 Prayer Book might be gathering dust, but the Episcopal Church still believes itself to be America’s political and economic elite at prayer.