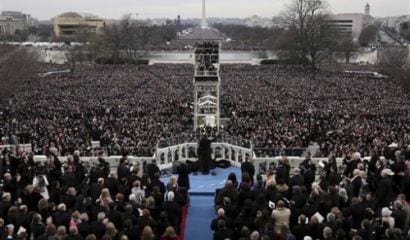 Casting about for something positive to say on Inauguration Day, pols and pundits fell back on the cliché that America exhibits the “peaceful transfer of power.” But that’s not much of a consolation if it results in revolution anyways. Most revolutions are not against state power but with it. So it goes with Obama’s, as he leaves the old forms in place but fills them with new revolutionary meanings.

The disturbing hollowness of Obama’s inauguration derives from this more subtle form of revolution. All the usual trappings of tradition were on display but at the service of a revolutionary ideology antithetical to them. Obama swore to uphold the Constitution, by which he meant his lawless reading of it. He invoked God-given rights, by which he meant man-made ones.

“There is no mob” here, said Republican Senator Lamar Alexander in his inaugural remarks, praising the day’s “orderly” transfer of power. But Obama’s concept of a living constitution is a species of mobocracy, in that it revolves around a demagogue seducing a mass of people into overthrowing their country’s original form of government. It is revolution not by force but by fraud: changing the form of government not through a constitutional convention but through the successful manipulation of popular opinion.

As a state senator in Illinois, Obama gave a radio interview in which he described the Constitution as defective. He lamented that courts did not “break free” from an originalist reading of it as a “charter of negative liberties.” He implied that if he had written the Constitution he would have made it a charter of positive liberties: “It says what the states can’t do to you, it says what the federal government can’t do to you, but it doesn’t say what the federal government or the state government must do on your behalf.”

The fulfillment of that vision — combined with the invention of new rights to gay marriage, free contraceptives, and so on — is what he meant by “fundamentally transforming” the country. His inaugural address was a pledge not to protect the Constitution but to undo it as he seeks to enact what he considers positive liberties.

Replacing the real Constitution with liberalism’s living one appeared in several passages of the speech. He alluded to it in his contention that rights are not “self-executing,” meaning that the federal government must execute them. And then he suggested that adhering to an original reading of the Constitution in our enlightened day and age is as silly and antiquated as fighting wars with muskets: “For the American people can no more meet the demands of today’s world by acting alone than American soldiers could have met the forces of fascism or communism with muskets and militias.”

Fidelity to the Constitution requires infidelity to it, he asserted with a straight face: “For we have always understood that when times changes, so must we. That fidelity to our founding principles requires new responses to new challenges, that preserving our individual freedoms ultimately requires collective action.”

He spoke of America’s “forebears.” But he didn’t mean the founding fathers. He meant the icons of the living constitution and the pioneers of the chief constituencies of the Democratic Party. The media cooed over his address as “Lincolnian,” but had Lincoln heard it he might have mistaken Obama’s “Stonewall” reference for a confederate, not a gay bar.

Liberal activists were thrilled to hear the “first gay” reference in an inaugural address contained within Obama’s implicit promise of a federal right to gay marriage: “Our journey is not complete until our gay brothers and sisters are treated like anyone else under the law, for if we are truly created equal, then surely the love we commit to one another must be equal as well.” This contradicts his hedge last year that while he personally supports gay marriage he still considers it a state matter.

It was an LGBT inauguration all around: the Cuban-born gay poet spoke of rainbows and “forgiving a father who couldn’t give what you wanted,” and the Episcopalian pastor who pinch hit for Louie Giglio proved sufficiently gay-friendly in the eyes of journalists. But gay activists might have detected some vague heterosexism at the Commander-in-Chief’s ball when the Obamas automatically paired off with members of the opposite sex for the ceremonial dance. “Our journey” won’t be complete until Obama dances with the male cadet.

At the heart of Obama’s revolution is the overturning of all traditional assumptions — a new constitution for a new man, whose journey ends not in self-government but in self-delusion under the shepherding of the state.