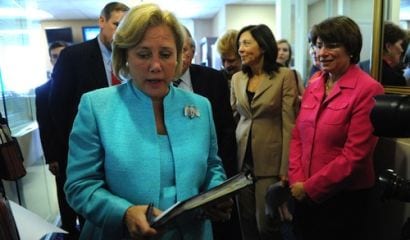 Peter King of Sports Illustrated has a regular mini-feature called “Things I Think.” His are all on sports, of course. The first ones in this column are on sports, too, so I hereby steal his approach, with attribution.

I think this Super Bowl could be a great one. I predict a win for Coach J. Harbaugh (a stale joke already)… and his Baltimore Ravens.

I think the best Super Bowl ever was the one in which the Giants used David Tyree’s miraculous “helmet catch” to squeak past the Patriots and deny them the immortality of an undefeated season.

I think the other absolutely superb Super Bowls, in reverse chronological order, were: Giants over Pats again, last year; Steelers over Cardinals, with Santonio Holmes pulling off a touchdown in the last minute while barely getting toes on both feet in bounds; Patriots over Panthers (field goal with four seconds left); Patriots over Rams (another last-second field goal); Rams over Titans (tackle on one yard-line on last play of game); Giants over Bills (missed last-second field goal); Forty-Niners over Bengals (the “John Candy drive”); Colts over Cowboys (underrated game, because it was so sloppy, but it was hugely entertaining, and ended with a five-seconds-remaining field goal); and, tenth (not in chronological order), even though it wasn’t quite as close, Saints over Colts, because of the Saints long, star-crossed history and the comeback from Katrina.

I think if I had two players in their primes to build a team around to win a Super Bowl, I would go with Joe Montana and kicker Adam Vinatieri. Yes, a kicker. I want somebody imperturbable, with a great leg, on my side if the game is on the line. My coach would be Vince Lombardi. But if I wanted a coach to guarantee a truly exciting game, win or lose, it would be Bill Belichick, who not only has overseen an amazing five super-close Super Bowl games as head coach, but also was the defensive coordinator who figured out how to slow down the Buffalo Bills’ incredibly high-powered offense in order to win the 1991 Super Bowl, 20-19.

I think, switching sports, that Tiger Woods’ runaway win in the San Diego tourney is a portent of another monster year. Suddenly, by midsummer, all the pundits will again be saying that Jack Nicklaus’ record of 18 profession major victories is in serious danger – alas.

I think Woods will never be as beloved as Nicklaus has become. He’s just not warm enough or personally thoughtful enough. And he doesn’t lose with enough grace.

I think, switching to politics, that personal grace is a key, oft-overlooked character trait that is essential for any republican (small ‘r’) leader to achieve the sorts of things that look great in the rearview mirror of history. George Washington had a fiery temper, but showed personal grace aplenty. Abe Lincoln needlessly abused executive power, but he exhibited a deep and abiding grace and compassion. Ronald Reagan famously kept a near-impenetrable personal bubble around him so that only Nancy truly got “close” to him – but he was a man of both grace and graciousness, a man who did countless, unpublicized acts of generosity for strangers.

Barack Obama has no personal grace. None. He is cold. He is petty. He is bitter. He will never achieve greatness. Oh, he will make a mark – it’s already a bad one – but he knows nothing about rallying a broad consensus behind him; instead, all he knows how to do is divide and (attempt to) conquer. Dividers aren’t great souls, and they aren’t great leaders.

I think Obama’s most notable (and notorious) legacy, Obamacare, will at least partially collapse, via both the courts and the market, before he leaves office. Four more, serious constitutional challenges to Obamacare remain (in terms of subject matter; in terms of lawsuits, the number is not four, but dozens). At least one of them, and maybe two or three, will succeed in invalidating not just some regulations, but in invalidating some of the legislative language (and perhaps the whole law). Meanwhile, the whole contraption will soon prove so unwieldy that the health care market will develop all sorts of end runs around the law, and the public will become increasingly enraged again.

I think Boeing’s problems with their Dreamliner plane are a sign of deeper corporate rot. This is a company for whom politics and bullying take precedence over excellence of product. If I were the Pentagon right now, I would be very, very nervous about the air tanker being built by Boeing.

I think even the National Republican Senatorial Committee will have a hard time blowing the 2014 Senate races. I expect major pickups by the GOP. I also think that in Louisiana, Mary Landrieu’s best move if she wants a political future is to not run for re-election, but instead to announce she will run for president. She can position herself as the lone real moderate in a sea of lefties, and win a plurality of votes in enough states to put herself on somebody’s VP list. But if she runs for re-election in Louisiana against, say, U.S. Rep. Bill Cassidy, she will lose.

I think, unfortunately, that conservatives will be in bad position again in the Republican presidential race in 2016 – because, just as has repeatedly happened since Reagan left the scene, there will be clearly a greater number of solid conservatives than of moderates seeking the nomination, so the moderates will be dividing fewer votes, and one of the moderates will again win a series of pluralities and, thus, the nomination. The good news is that both Bobby Jindal and Paul Ryan are already trying to sound tonally more moderate without giving up conservative bona fides, showing that they understand the need to at least partially bridge their way out of the media-imposed ghetto of “right wing only” candidates who can’t find primary votes on the center-right. If a conservative candidate is indeed going to win the nomination, he or she will need to earn the votes of millions of moderate Republicans – and to do that, tone is incredibly important.

I think that neither Hillary Clinton nor Joe Biden will be the Democratic nominee in 2016. I think the RNC needs to be starting serious opposition research, right now, on Andrew Cuomo, Martin O’Malley, Joe Manchin (although it should also try to get Manchin to switch parties after 2014), John Hickenlooper, Mark Warner, Deval Patrick, and others. The time to get damaging stories (true ones only; no cheap shots) out is well before the campaigns start. The stories need to be vetted and confirmed even by the establishment media long before they can appear to be mere political attacks.

I think there remains a wide opening on the right for a good and principled communicator to step forward and re-explain conservatism, and the virtues of limited government, to hundreds of millions of Americans who either knew not Reagan or who have, in the intervening decades, forgotten his lessons.

I think, on second thought, that Coach J. Harbaugh will lose this week’s Super Bowl…..