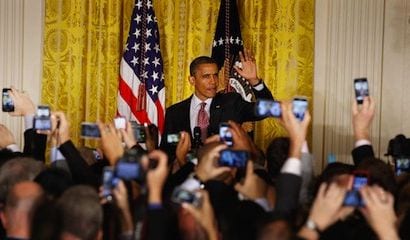 After seizing power, the architects of the French Revolution instituted a new calendar, declaring the beginning of their regime ”Year One,” thus symbolizing their total contempt for tradition. They wanted the world to know that they were rebuilding French society from scratch.

The left under Obama is approaching that level of revolutionary arrogance. Regarding itself as vastly enlightened, it seeks to institute a kind of cultural and political Year One in which America rises above all traditional understandings of human nature and embraces such changes as women in front-line combat, gay marriage, and transgender identities.

Conforming to this mood, CBS recently aired a commentary in which a Georgetown Law School professor said “Let’s get rid of the Constitution.” America has no need of tradition, he argued. The country can be based on nothing more than the limitless wisdom of this generation. Of course, the professor’s argument has already been adopted through Obama’s “living Constitution,” which treats the written one as dead.

In the left’s Year One, man is freed from all laws, visible and invisible, as he determines good and evil anew. “Human nature” is treated as an outmoded concept, as it implies that humans receive a fixed nature rather than determine one through pure choice. Some on the left even consider the category of “transgender” too confining, as it assumes male or female. They prefer “agender,” since that suggests more existential possibilities.

Under this culture, one isn’t permitted to notice physical differences between the sexes, much less acknowledge that children need a mother and father. The idea that the good can be deduced from anything prior to human choice is offensive to this culture. America is “beyond” such trivial considerations–a refrain heard frequently over the last few days on cable shows discussing women in combat.

The left considers itself the great defender of science, even as it denies the most fundamental biological realities. Liberals can stare at an ultrasound image and see no human life. Such is the left’s grasp of scientific evidence. It is a movement not of science but of fantasy. For the sake of its egalitarian dreams, it routinely denies elemental facts of life and thinks itself capable of extinguishing them through technology or humans simply choosing to ignore them.

Placing women in direct ground combat infantry units poses no problems, it blithely says under that mindset, pooh-poohing concerns about differences between men and women in upper-body strength or the obvious conflicts that would result from men and women living in close quarters on battlefields. The left doesn’t even feel the need to argue these points. It simply declares such objections retrograde and asserts that humans can be hammered into an amorphous sameness.

Obama, who said in 2008 that he didn’t “necessarily” want women drafted into combat roles, assembled a “Military Leadership Diversity Commission” to provide all the requisite Orwellian denials of reality.  But human nature is impervious to such propaganda and will take its revenge in due course.

Given the choice between “equality” and military effectiveness, the left chooses the former while pretending that society can have both. Standards will remain as high as ever, they claimed. Right.  A few defenders of the traditional policy have wondered why professional sports remains segregated if what the left says about the sexes is true. Shouldn’t we have a co-ed NFL? The answer to why America doesn’t have co-ed professional sports is that sports fans would never permit it.  Sports is far too sacred for such ideological tinkering. “Everyone is conservative about what he knows best,” as the historian Robert Conquest has said. Sports fans know perfectly well that “equality” would destroy their favorite sports.

The military is more essential to a country than professional sports, and yet in the grip of the left’s Year One ideology it is willing to perform casual experiments against human nature. The success of that ideology can be measured in the relatively mute response from Republicans to this change. GOP leaders have either been silent or supportive of it, which makes sense since they began the process of feminizing the military under Bush. The success of that ideology can also be seen in the complete disappearance of the argument against women in combat on familial and cultural grounds. Sending recently pregnant female soldiers to the battlefield is now a largely uncontested idea.

What begins as “equal opportunity” will end as equal obligation, as women find themselves on battlefields whether they like it or not. The equal obligation to die in battle is a great advance for mankind, according to the New York Times, which quoted approvingly a general who said, “I think people have come to the sensible conclusion that you can’t say a woman’s life is more valuable than a man’s life.”