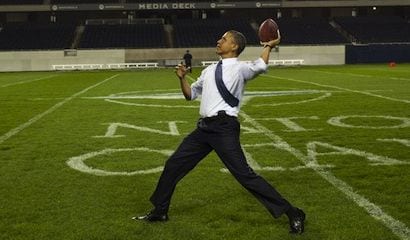 Barack Obama labels himself “a big football fan” on the eve of the Super Bowl. But he envisions a kinder, gentler game, one that won’t force us “to examine our consciences quite as much.” Barack Obama told the New Republic, “If I had a son, I’d have to think long and hard before I let him play football.”

“Of all games I personally like foot ball best,” Theodore Roosevelt wrote football founding father Walter Camp in 1895, “and I would rather see my boys play it than see them play any other.”

TR’s wish came true. During the 1905 season, when the gridiron incited more controversy than it does now, son Theodore Jr. played on Harvard’s freshman team. Every bloody nose and laceration made headlines. When Yale’s freshmen eleven roughed him up, Ted Jr. reassured his father that press reports theorizing that he had been targeted were “all bosh” and “rotten talk.”

Ted Jr. played in a more dangerous game than even the one Baltimore Raven Ed Reed will play in this Sunday. “I am with Obama,” the hard-hitting safety told the Baltimore Sun. “I have a son. I am not forcing football on my son. If he wants to play it, I can’t make decisions for him. All I can do is say, ‘Son, I played it, so you don’t have to.’”

More dangerous extracurricular activities await teenagers than football. Barack Obama didn’t play football in high school. He signed up for the “Choom Gang,” a collection of ’70s slackers dedicated, as their name implies, to smoking marijuana. Like Ed Reed, Obama made a name for himself making interceptions. “When a joint was making the rounds,” David Maraniss explains in his recent presidential biography, “he often elbowed his way in, out of turn, shouted ‘Intercepted!’ and took an extra hit.”

What brain injuries did those kids endure?

The president’s blindside hit on football, like most blindside hits, lacks proportionality. Last season, football hits killed four players. Smoking tobacco, the habit that the commander in chief indulged for decades, killed more than 400,000 Americans last year, according to the government Obama presides over.

It doesn’t take a mathematics professor to tell us that 400,000 is greater than 4. Even a constitutional law instructor could figure that one out. Some activities pose greater dangers than a game of football.

Theodore Roosevelt Jr. knew this better than most. As a fiftysomething World War I veteran, Roosevelt posthumously earned a Medal of Honor for storming Utah Beach — so much as you can “storm” with a cane — on June 6, 1944 alongside much younger men. The only general to land on the French beaches during that first attack wave, Roosevelt survived only to die of a heart attack in a field tent a month after D-Day.

Theodore Roosevelt Jr. wouldn’t have become himself had he gone out for the Choom Gang at Harvard instead of the football team. Reaching our full potential as human beings involves embracing challenges, not avoiding them in the back of a smoke-filled VW bus.

Life is a rougher game than football. It occasionally requires self-abnegation, teamwork, and perseverance. Sometimes it demands that when we get hit, we hit back. Other times it tells us to walk away. Most importantly, it teaches us to get up after we get knocked down.

The hysteria over football ensures that tens of thousands of kids miss out on these important life lessons. The instruction imparted in front of a video-game screen, or at the backend of a Choom Gang-style pot circle, just doesn’t stack up.

Theodore Roosevelt, who knew nothing of Xboxes or reefer cigarettes, understood that fields build men while so much else stunts them. His namesake lived as a validation of this idea.