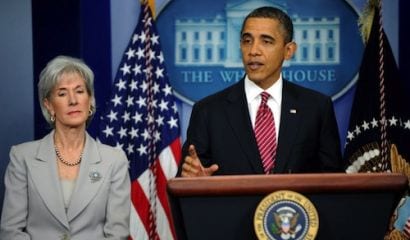 The Obama administration has found the policy equivalent of alchemy. Employees of religious organizations will receive contraception coverage. And neither the individuals nor the groups will have to pay for it. It’s magic.

On Friday the Department of Health and Human Services announced its new rule mandating coverage of contraception. Responding to the furor that the proposal first raised, HHS Secretary Kathleen Sebelius proclaimed that the draft regulation would guarantee free coverage “while respecting religious concerns.”

The latest iteration does clarify the exemption, expanding its reach a bit, to some hospitals, social service groups, and universities with religious affiliations. But there would be no protection for other organizations, as well as employers or employees in secular work who happen to be religious. As before, freedom of conscience is sacrificed for the administration’s ideological objectives.

Equally bad is the means of “protection.” Chiquita Brooks-LaSure of HHS helped write the language and explained: “Under the proposed rule, insurance companies — not churches or other religious organizations — will cover contraceptive services.” Employees at a religious institution could go to their group’s insurer and receive a separate plan priced at zero dollars. Insurers cannot “impose any premium, fee or other charge” for the coverage.

What’s not to like about this idea? Indeed, why not use this model for health insurance generally?

Think about it. Congress could mandate a generous standard medical plan for all of us. (Heck, legislators might as well include people who aren’t working. Why let lack of employment get in the way of such a great idea?) Not just generous, but very generous. After all, we are entitled to “Cadillac” care — every procedure at the finest facilities for as long as we want.

Lest small-minded critics complain about the cost, the benefits, all of them, would be FREE! Insurance companies would be required to provide the necessary plans. But they would not be allowed to “impose any premium, fee or other charge” for doing so. Just like for the contraceptive benefits.

Then everyone in America would have comprehensive insurance at no cost.

What could possibly go wrong with such a program?

Tragically, it appears that someone at HHS realized that there ain’t no such thing as a free lunch, or insurance plan. So the agency proposed allowing insurers to receive a credit against fees they would owe for participating in state health insurance exchanges. Which means the taxpayers would end up paying for the coverage. For Uncle Sam would have to make up the difference somehow — or borrow more money, which just means that future taxpayers would end up paying.

The administration rule nicely demonstrates the fundamental mistake that is Obamacare. It is ridiculous for Washington to decide health care benefits for 315 million Americans.

First, the proposed rule has nothing to do with making “it clear that your boss does not get to decide whether you can have birth control,” as claimed by Planned Parenthood. Today everyone is free to purchase contraception, which is affordable for most everyone. The regulation actually is about subsidies, that is, forcing those who don’t want or like birth control to pay for those who desire birth control.

Second, there is no standard one-size-fits-all insurance package that is appropriate for everyone. Just as it would make no sense to mandate a particular standard for homeowner, auto, or life insurance, it makes no sense to impose a set package for health insurance. We all are different and prefer different mixes of risks and benefits, as well as tradeoffs between health insurance and other uses of our money.

Imagine telling a car owner that he or she also must pay for motorcycle, racecar, and truck coverage. Never mind that the driver doesn’t own any of them. Some far-sighted politician or bureaucrat has decided that this coverage is “necessary” and all must pay. Similar is requiring insurance coverage for maladies and procedures irrespective of the insured’s desires.

Third, insurance for birth control is not insurance. The purpose of insurance is to guard against unexpected and large, even catastrophic, expenditures. That ain’t birth control. Not only is it affordable, even for students who attend Georgetown Law School, but its use is fully under the control of the insured. It is as if auto insurance paid for gasoline fill-ups. Contraception coverage is prepayment of expected medical expenses, expenses that you can increase as much as you want.

Fourth, the push for mandatory coverage is ideological, not medical. The vast majority of plans already cover birth control for the simple reasons that it is widely desired and unplanned pregnancies are expensive. Nor is contraception uniquely important — more vital than mammograms, chemotherapy, colonoscopies, heart bypass operations, and much, much more. If birth control should be free, then surely everything else should be free as well. Why make patients pay for any treatment?

Fifth, making contraceptive coverage truly “free” is impossible. Someone has to pay. Contrary to the apparent assumption of many policymakers, birth control products do not magically appear ex nihilo. Someone has to create, produce, market, and sell them. Which means that someone has to be paid by someone else. If not the patient, then who?

The administration has shifted, not eliminated, costs. Thus, everyone under a plan covering contraceptives will pay for the benefit, even if they do not use them, never intend to use them, and are morally opposed to using them. That may be a good deal for the person who wants contraception, but not for the rest of us.

At least this makes more sense than the administration rule, which says insurance companies have to pay for the coverage. If they can’t charge specifically for birth control, they will treat coverage like an administrative expense. Either all plans offered to religious organizations or simply all plans for everyone (for the sake of simplicity) will incorporate the cost. Then we all will pay so Washington can satisfy the ideological preferences and financial interests of clamorous political groups.

Sixth, requiring coverage of contraception (as well as abortifacients and sterilization) is worse than other mandates because it violates the conscience of some religious believers. Requiring Catholics and some others to subsidize birth control is a direct assault on their faith. One can argue about the rule’s constitutionality — First Amendment jurisprudence is notoriously complex — but the government should not challenge people’s fundamental moral beliefs without a serious, even compelling justification. There is none for relieving those having sex from paying for contraception. Sex is good, but that doesn’t mean the rest of us should have to pay for those using birth control while engaging in sex.

In short, the administration rule is extraordinarily bad on medical, policy, and moral grounds. It can only be explained as being directed not for those who use birth control but against those who oppose using birth control. It is about power and control. That is, advocates want to force Catholics and others to pay for contraception as a matter of (malign) principle. It makes Schadenfreude the basis for the U.S. Code.

There is much to dislike about Obamacare. Top of the list should be the arrogant presumption that Washington knows our treatment needs better than the rest of us. Choosing our own medical destinies should be our real “right” to health care.