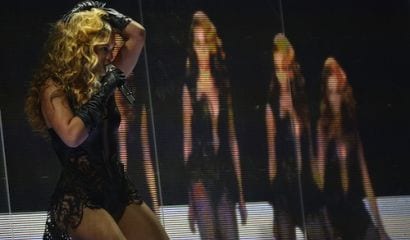 Maybe the culture really has been lost. Maybe it’s hopeless. Pop culture, at least, is so crass, so vile, so lacking decency or restraint, as to appear irredeemable. And the Super Bowl, the grand pageant of Emperor-with-no-clothes Roger Goodell, provided crowning evidence of the culture’s pungent rot.

It wasn’t the game itself that offended — the game was well played and thrilling — but rather the halftime show and the commercials and so much else of the trash that surrounded the game itself like a Superfund site bordering a family park. Indeed, this is the third straight year that the halftime show featured artists known for tastelessness or offensiveness performing hyper-sexualized songs while writhing in various stages of Bacchanalian undress.

The year before, it was Madonna on stage, fresh from years of outraging the Catholic Church with deliberate affronts the church considered blasphemy. If memory serves, she left little to the imagination in her halftime show. And the year before that, the Black-Eyed Peas sang from their decidedly R-rated songs that contain such lyrics (in the full song) as: “Niggas wanta hate on us/ niggas be envious…. Nobody got nuttin’ on us (no)/Girls be all on us. From London back down to the US/We rockin’ it (contagious), monkey business (outrageous)/ Just confess, your girl admits that we the sh**.”

Meanwhile, in the commercials, morning-after-sex scenes (complete with handcuffs) vied with guys handling women’s panties and Calvin Klein underwear leaving almost nothing to the imagination.

Look, there is such a thing as being cleverly risqué. And on the other side, there is a difference between prudishness and commonsensical decency. Nobody likes a prude, and most reasonable people don’t mind a little bit of sly suggestiveness. (The Kate Upton commercial about the car wash, if you saw it, accomplished the latter, very creatively.) But there are seven-year-olds aplenty watching the Super Bowl, and most of the game, after all, is in the “family hour” of a Sunday night. Is it really too much to ask the NFL not to accept ads that lead tykes to ask, “Daddy, what’s a ‘perv,’ and why is that guy feeling around that girl’s yellow underwear?”

Everywhere one looks, the former “family hours” are full of rot. Flipping through channels the other day, I happened upon a rerun from Cougar Town. Ya just gotta love it when a mother’s friend offers the mother to take the virginity of her 15 year-old son, who has been openly ogling the friend’s breasts holding up the two letters “O” in an “Ohio” t-shirt — and the mother declines only because her friend might just be too wild for her son’s first time.

The feeling was similar a few years back when I happened upon Two and a Half Men as a late-middle-aged woman bragged to her son about her plans to “get laid” that night, and then proceeded to urge her son to bed a married woman in order to break up the woman’s marriage so the mother (the “get laid” lady), a real-estate agent, could sell that other woman’s house.

And thank goodness I didn’t actually get to see the 30 Rock episode where a group of MILFs competed for the favor of 8th Grade boys.

One need not be a prude to lament these trends. One can want homage paid to older standards — even if sometimes honored only in the breach — without wanting to interfere in any way in anybody else’s private lives. And one need not be a defeatist to worry that the cause of traditional decency may be doomed.

Of course, trends can change. They have before. Political party strength flows and ebbs; cultural indicators fall and rise; sometimes, pursuits that seemed edgy and exciting become passé. And while of course modern society will never see anything even approaching universal adherence to, say, Victorian standards (which themselves were breached almost as often as honored), it should not be too much for all of us to refuse to reward cultural rot with our money, our time, or our tacit acceptance.

Surely there are others still under 50, or maybe even under 40, who feel like old fogeys when listening to Beyoncé writhe half-dressed while singing something almost indecipherable about how her “texture is the best fur/I’m chinchilla” (huh?!?!?). Surely there are those who don’t want children absorbing this stuff. And surely, surely, a market correction will somehow create at least a semi-happy medium, in which the trash and filth isn’t quite so public — and in which it no longer enjoys the support of the NFL.