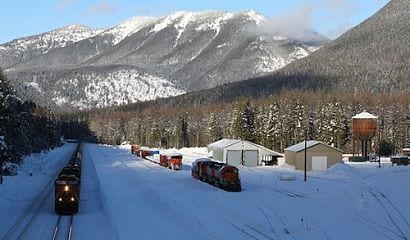 Last week Alaska Senator Lisa Murkowski unveiled the Republicans’ new plan for energy development. She called for a partial opening of the Alaska National Wildlife Refuge, the development of offshore oil tracts plus more production from federal lands. Within hours the Natural Resources Defense Council had dismissed the whole thing as “a plan from the past.” And in fact it was little more than a reiteration of the four-year-old cry, “Drill, baby, drill.”

Anyone who thinks this signals another four years of energy stalemate, however, is sadly mistaken. The very next day, energy expert Daniel Yergin was telling a hearing of the House Energy and Commerce Subcommittee that, if anything, Washington is completely out of the loop as to what’s happening in energy. “Our thinking has to catch up with reality,” said Yergin, head of the prestigious Cambridge Energy Research Associates. “Everything has been turned upside down.”

Indeed. Only six month ago Mitt Romney was being mocked on front pages across the nation for suggesting North America could achieve energy independence within the next decade. Romney was careful to include Canada and Mexico, but the editorial writers ignored him anyway. Now six months later you could cross out Canada and Mexico. Within a few months, Congress will be undertaking a contentious debate over whether we should become an energy exporter.

Everybody knows about the natural gas boom, of course, brought about by the new fracking technology. Prices have been driven so low that gas wells are now closing down, waiting for the glut to subside. Fracking has so much momentum that even the attempt by Matt Damon to do for fracking what The China Syndrome did for nuclear power slunk out of the theaters in about a week. Sorry, Hollywood, even star power won’t be able to stop this one.

But natural gas is only the beginning. Where indirect drilling and the new fracturing techniques will have an impact is on reviving American oil. Consider this. The Bakken Shale’s “tight oil” formation, opened for development in 2006, has lifted America’s oil output 38 percent over the last five years. That’s the equivalent of the entire output of Nigeria, OPEC’s 7th largest producer. North Dakota is booming as if it were the 1980s. Unemployment is 3.2 percent, lowest in the nation, and Wal-Mart is paying $17 an hour. Things have gotten so good that the New York Times has felt compelled to dispatch reporters to tell us how women are being harassed in oil towns and many roughnecks lack medical insurance. (But the roughnecks do have enough money to offer the women $3,000 a night to tend bar at private parties.)

Now here’s the big news. As far as tight oil is concerned, the Bakken is just square one. The Eagle Ford formation in Texas, which is just getting started, is estimated to have the same amount of reserves (3-4 billion barrels). But another 15.4 billion barrels — 64 percent of all U.S. reserves — lie in the Monterey formation of central California. (Why does California always get the best of everything?) If Golden State politicians allow this oil to be developed, it will be far more significant than the ANWR or the Keystone Pipeline.

All these American resources are open for development precisely because they are not owned by the federal government. That is the saving grace. Except for the 60 percent land west of the Rockies that is owned by the government, America has the best system in the world for developing resources. Private investment and private ownership get things done while governments everywhere are consistently bogged down in bureaucracy, “baksheesh,” red tape, environmental opposition, and every other kind of impediment.

This was emphasized again only last week when BP estimated the tight oil and shale gas resources that have become available around the world through fracking and then projected how much of these new resources are likely to be developed in the next fifteen years:

As you can see, oil and gas resources are fairly evenly distributed around the world except — irony of ironies! — in the Middle East. Too bad. They will have to settle for the conventional varieties. But when it comes to developing these resources there is only one place where it is going to happen — North America, which means the United States and Canada. And notice how estimated North America production in 2030 — 800 million tons of oil equivalent — is still only a drop in the bucket compared to the 50 billion tons of oil equivalent estimated to lie beneath the ground. If the rest of the world ever gets around to adopting these technologies, there will be plenty of oil and gas for everybody.

In the meantime, the willingness to develop energy resources is creating a huge division between the laggards and those willing to forge ahead. Europe, for example, is falling by the wayside. Although the Continent has ample shale gas, most countries (except Poland) have already decided not to use them. The result is the EU is becoming ever more dependent on Russian gas — which is the equivalent of putting your neck in the noose. The Russians are already shaking down Ukraine and Lithuanians have been left shivering this winter as Gazprom enforces its monopoly power. (Lithuania was put in this bind by the European Union in 2009 when it was forced to close its two nuclear reactors, which provided 70 percent of its electricity, as the price of entry.) Meanwhile, Russia and China continue to forge ahead with conventional oil and gas. Russia is planning pipelines across Siberia to reach Asia and China is buying up energy resources from Africa to Alberta (as well as in the U.S. — President Obama is afraid to rock the boat for fear China won’t lend us any more money).

What is even more interesting is the divide that is coming between the Red and Blue States. Those states with Republican governors and legislatures are forging ahead. Texas, Louisiana, and Oklahoma, of course, have long been the workhorses of the nation but Ohio Governor John Kasich also did a beautiful job of bringing the players together to chart Ohio’s development of its Utica Shale. Now shale gas revenues are not only filling employees’ pockets but spurring a manufacturing renaissance as well. In neighboring Pennsylvania, where Republican Governor Tom Corbett presides over an all-Republican legislature, the Philadelphia Inquirer reports: “Private landowners are reaping billions of dollars in royalties each year from the boom in natural gas drilling, transforming lives and livelihoods.” Pennsylvania royalties are moving north into the vicinity of Alaska.

Right across the border in New York, however, despair prevails. Although upstate farmers are ready to go, the state is in the clutches of New York City’s celebrity culture where Yoko Ono is leading an anti-fracking campaign out of her Central Park West apartment. Governor Andrew Cuomo, of course, is shilly-shallying, eager not to offend anyone famous. Cuomo has punted several times on the issue and will continue to dodge it as long as possible. As far as the oil and gas industry is concerned, who cares? New York’s Marcellus portion would only add to the glut, depressing prices even further. But upstate New York remains in the company of Mississippi and Alabama as the poorest regions in the nation.

Just like Governor Cuomo, President Obama will avoid taking a stand on the Keystone Pipeline as long as humanly possible. The latest postponement is until June and will undoubtedly stretch far beyond that — maybe into the next administration. But once again, it doesn’t matter much. The only losers will be those Texas refineries that were built to process the heavy Alberta tar sands. Much of that oil was slated for export as refined products anyway. Killing Keystone won’t have much impact on domestic supplies. In fact, President Obama will probably argue that the bounty from tight oil and shale gas now makes Keystone unnecessary — while claiming credit for the fracking boom himself.

The epic confrontation, however, will come when California has to decide whether to open the Monterey Shale. Will the Golden State go the way of Europe and forsake resource development? Will it go on chasing windmills and solar butterflies while sliding toward insolvency? And if California, New York, Illinois, and the other enterprise-averse states do slide into insolvency, will the prospering red states be obliged to bail them out?