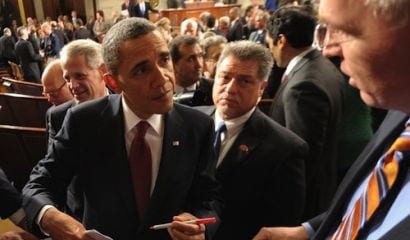 President Obama is expected to eviscerate Republicans during tonight’s State of the Union address tonight. It will be a speech that builds on his second inaugural address last month. As Charles Krauthammer put it during an appearance on FNC’s Special Report with Bret Baier:

In fact, if the inaugural address was this sort of extraordinarily ideological address, I think the State of the Union is going to be extremely aggressive and partisan. Obama is still campaigning. He hasn’t stopped. Part one was to re-win the presidency, which he did. But now he is continuing it.

Indeed, President Obama will be embarking on a tour in support of his SOTU address traveling to Asheville, North Carolina, Atlanta, and his political home base in Chicago. Back to Mr. Krauthammer:

His idea — the objective, the political objective — now is to reduce, to fracture, to marginalize the Republicans in the House who were the ones that stopped the agenda in years three and four of his presidency, and who he has to marginalize if he wants to enact his agenda in the second term.

Remember when Obama dissed the Supreme Court over the Citizens United decision during the 2010 SOTU address? The Supremes had to sit there and take it save for Justice Samuel Alito who was seen saying, “Not true!” Having no desire to be subjected to Obama’s demagoguery, Alito subsequently skipped the following SOTU nor was he present last year.

Unlike Supreme Court justices, senators and congressmen like to be seen on TV by their constituents. But senators and congressmen don’t like being insulted on TV especially on their turf. If President Obama plans to spend a better part of an hour heaping scorn towards the Republican side of the aisle, the GOP shouldn’t sit there and take it. Instead, they should stand up and walk out on President Obama. It would be a SOTU address no one would ever forget.

Of course, Republicans would be excoriated in all the usual circles. The GOP would be accused of being divisive, disrespectful, eroding civility, and, no doubt, racism. But Republicans are accused of these things every day of the week and twice on Sunday. How will it be any different if they don’t walk out on Obama?

There are several reasons why this gesture will be advantageous to the GOP. First and foremost, it would be a sign of unity amongst Republicans. It’s no secret there are hard feelings amongst GOP since Obama’s re-election victory in November. Walking out on the SOTU address would demonstrate a resolve not only against Obama’s agenda but against his imperial manner.

Yes, Republicans will be called rude. But the GOP can simply say, “We are giving him the same level of respect he has given us. If the President wants to address as adults, then we are willing to listen. But as long as he insists on demonizing us with petulant behavior, then we will have no part of it.”

It also must be remembered that politics is theater. Why shouldn’t Republicans engage in it? Why shouldn’t the GOP write the script? Walking out on Obama would be the ultimate act of political theater. It would send the dramatic message that Obama is losing his audience. He may still be president but it doesn’t mean the country accepts his agenda in its entirety. Barack Obama is the president of all Americans, not just those Americans who voted for him. Barack Obama is at the service of all Americans including those who bitterly cling to guns and religion and it’s time he started governing that way.

Of course, I have no illusions that Obama would do an about face if Republicans were to walk out on him tonight. If anything, Obama would dig in his heels. But at least the GOP would put him on notice that they won’t roll over and play dead.

However, I also have no illusions that Republicans will walk out on Obama any more than Obama will stop his demagoguery against the GOP. The Republican Party is just too darn polite. Republicans will just sit there and take it.