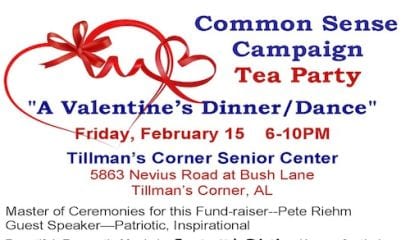 Quick: Call the Obama thought police! Call MSNBC! These Tea Partiers are dangerous haters! They are reactionary in music as well as politics. They probably even look down on Puff Daddy! And dontcha know that ballroom dancing is inherently racist? This is one step away from Jim Crow, and from there comes the imminent danger of leg irons and the lash.

And what’s worse about ballroom dancing is that these extremists actually do it with their clothes on — rather than going nearly natural, as in Super Bowl halftime shows, so everybody can see what’s underneath. Obviously the Tea Partiers are hiding something under those clothes: machine guns, perhaps, or shoulder-fired missiles, or maybe a dirty nuke or two. A fair number of the Tea Partiers down here served in the military, you see, and the Obama Department of Homeland Security has told us that ex-military people might be domestic terrorists.

And obviously, nobody does the foxtrot or a waltz unless one is up to no good. Cultural hegemonists like these are scary people….

In addition to subversive activities such as dancing without background lyrics full of scatological references and violence, local Tea Partiers down here are of course guilty of engaging in politics. They write letters to their state representatives. They set up luncheons in the state’s capital city on the first day of the legislative session so they can hear lawmakers talk about their agendas. They even take positions on educational issues — including opposition to the Common Core standards initiative, an oppositional position so extreme that even George Will shares it.

Oh — and here’s one other thing the Common Sense Campaign does: It actually serves the public weal in a non-ideological, thoroughly non-partisan way. Numerous times throughout the year, in various small towns across several counties in southern Alabama (each of the coastal counties is larger than the state of Rhode Island), various branches of the CSC host town hall meetings and candidate forums for local elections. Open forums. Neutral forums. The CSC doesn’t tilt the forums toward or against any particular candidates. The group doesn’t turn them into voting caucuses or contests where candidate organizations vie for endorsements or pay to bus in voters. The CSC doesn’t even charge admission despite having to pay for renting the community halls for the events — although their volunteers do of course welcome discretionary donations in return for the cookies and iced tea they serve free of charge.  Far from being some lavishly funded outfit, the CSC scrambles for membership dues, and was forced to close its headquarters this year in order to save the lease money.

When even the main local newspaper can barely be bothered to remind people of special elections to fill vacant local seats, the CSC is out there, trying to spread the word, giving the candidates a forum, encouraging people to take their civic responsibilities seriously. Or, if there’s no election, the town halls feature several local officials — including some who may have been opposed by most CSC members — with each taking questions from the floor, in an entirely friendly atmosphere. If this isn’t pure public service, nothing is.

“We’ve done these forums since we founded our group several years ago, but since the presidential election, we’ve sort of stepped it up because we felt we needed a way to reinvigorate folks and get them back into the fight,” said Dr. Lou Campomenosi, a political science professor who is president of the CSC. “Washington is so far removed from any of our direct influence. The feeling is that the state and local governments offer people the best way to get involved.”

It’s not that the CSC is some sort of anodyne, toothless group, however. It’s just that there is a time and place for direct advocacy — of a decidedly, thoughtfully conservative bent — and other times for listening, questioning, and learning. Besides, as Campomenosi noted with a laugh and some pride, “the questions that are asked at these forums are usually along the lines of getting answers to particularly conservative concerns. They seek answers to questions important to our members.”

Any intelligent public official should get the message, he said, on the importance of “balanced budgets, localized education, and states’ rights [on non-national issues].”

In other times and places, of course, the CSC will make crystal-clear where it stands, all on behalf of an agenda straight out of the old civics books — an agenda of constitutionally limited government that respects and protects individual freedom. The CSC activists may be polite, but they are also admirably tenacious.

A core group of volunteers runs the show — but they “punch above their weight,” as the saying goes. A few weeks ago, the Fairhope CSC held a town meeting on a Wednesday night on the eastern side of Mobile Bay, and on Thursday night there were simultaneous meetings in Irvington and Semmes, 28 miles apart, on the western side. A very impressive attendance of 75 citizens showed up at Irvington, with another 40 at Semmes, on a random January night in a “down season” for politics when national elections were over, Congress was barely doing anything, and the state Legislature wasn’t yet in session. But people do care about self-government, they care about their communities, and they love their country. The Tea Parties give people a voice, and perhaps will turn that voice into a megaphone.

“We would hope they would leave with a sense that the Tea Party has given them a voice and a forum,” said Kay Day, president of the CSC chapter in South Mobile County and events coordinator for many of those forums. “It is an honor to be able to provide that format and to get people encouraged about their government and their vote. We’re just hometown people that love our country and we work hard, very hard to get that opportunity out to the public.”

All of this activity, of course, is very much in the spirit of the best American civic traditions. Tocqueville would have recognized it and approved, as would have Edmund Burke (from abroad), Sam Adams, and Ben Franklin.

And when the CSC starts talking about “Charlie, Foxtrot, Tango,” it’s not some sort of secret code for revolution. It’s just for an old-fashioned dance, enjoyed by friends and neighbors, to raise some money to rent facilities for their town halls and maintain their web site. This is grassroots citizenship at its finest — and it is the type of citizenship that forms bonds stronger than anything Barack Obama or MSNBC can throw at them. When it comes time to rebuild the United States after the sad Obama Interregnum is complete, it will be groups like the Common Sense Campaign that will be calling the tune.