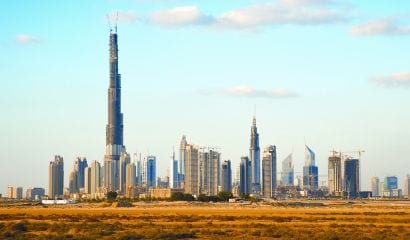 TIMES ARE TOUGH for Christian communities in the Middle East. They are being slaughtered in Syria, persecuted in Iraq and Iran, bullied in Egypt, and frightened by the rising tide of militant Islam in almost every Arab country.

But there is one exception to this depressing trend. It is a Gulf state where the authorities have allowed Christian churches to double in size and in number; where congregations are growing exponentially with their services protected under national law; where the biggest problems facing church leaders are expanding their buildings, managing their crowds, and finding enough parking spaces for their worshippers. Welcome to the United Arab Emirates, a Muslim country that shines as a beacon of freedom and tolerance for other faiths in an increasingly intolerant region.

Just before Christmas, I traveled to the UAE to visit my son who is working in Abu Dhabi. We went to the evening service at St. Andrew’s Anglican church, which has been flourishing in this oil-rich state since 1968, when President Sheikh Zayed bin Sultan Al Nahayan attended its dedication service, setting the ethos for religious freedom in the UAE. Today there are more than 40 church buildings across the country. The American Evangelical, Catholic, Anglican, and Eastern Orthodox churches were the UAE’s 20th-century faith pioneers after oil brought a population boom to this once remote corner of the Gulf. Today, 10 percent of the 5 million people who live in the UAE are practicing Christians. Their groupings range from the main Western and Eastern denominations, to Korean Evangelicals and Egyptian Copts.

Two features stand out in this vibrant Christian scene. The first is the growth of congregations. The second is the hospitality and encouragement extended to the Christian community by the UAE leadership.

The chaplain to the Anglican community here is the Reverend Andy Thompson. Ten years ago we were classmates reading theology together at Wycliffe Hall, Oxford. I find it hard to imagine that any of our fellow seminarians who have since entered the ordained ministry can be presiding over a church growing as quickly as St. Andrew’s in Abu Dhabi.

On the weekend I was there, St. Andrew’s held its annual Christmas Carol service in the sand dunes of the desert. The attendance was over 1,500. On its normal Sundays (actually Fridays, since that is the start of the weekend in Muslim countries and the traditional day of prayer) the church is bursting at the seams.

St. Andrew’s is located in a district of chapels, churches, and congregations that in Abu Dhabi alone attract some 200,000 worshippers each week. All sorts and conditions of men can be found in the pews here. Among the faithful you see blazered British bankers, bearded Greek Orthodox shopkeepers, Texan oil engineers, Irish Catholic construction workers, Filipino maids, Somali nurses, and (most numerously) Indian Pentecostalists. They are bound together by their common Christian faith and by their need to glorify the transcendence of God in a country built on the oil riches of Mammon.

The national leader most responsible for encouraging religious freedom in the UAE is Sheikh Nahayan Mabarak Al Nahayan, the minister of higher education and a senior member of the ruling family. He takes an active interest in the Abrahamic religions, saying, “In the UAE we enjoy a society that prizes tolerance and we value the benefits of living in a nation where people of many different faiths live, work, and pray in harmony and peace.”

Having first met Sheikh Nahayan when he was a teenage Oxford undergraduate more than 30 years ago, I know well how his views on Muslim-Christian understanding have been shaped by drinking deeply from the wells of theological scholarship, not least the Maliki school of Islam, which emphasizes outward-looking tolerance. Nahayan believes that the good works and manifestations of the Christian religion “are coincident with the principles that guide the Muslims of the United Arab Emirates.” This has led him to be generous with financial assistance and grants of land to the country’s Christian churches, and to enlarge the atmosphere of tolerance in his country to the point where there is genuine multi-faith respect and understanding.

WHAT IS SO singular about this, which is no small achievement, is that most of the UAE’s neighbors treat Christians and non-Muslim believers with starkly contrasting hostility, if not outright persecution. Why so? The key question here is: Does Islam itself cause the persecution, or is it the 21st-century political interpretation of Islam by modern governments and groups that leads to religious oppression?

The Emirati people (citizens of the UAE) are proudly Islamic in their culture and their tradition. Their code of hospitality is rooted in their faith, which they uphold with no less devotion than their intolerant neighbors. Daily life in the UAE revolves around the five calls to prayer, which set the rhythm of the day for both expatriates and locals. Every neighborhood has its mosque and every shopping mall its prayer rooms. This is a country committed to the teachings of Islam, yet alongside many of its main mosques in the larger population centers of Dubai, Abu Dhabi, Al Ain, Sharjah, Ras al-Khaimah, and Fujairah there are churches too. The explanation for this peaceful coexistence lies partly in the tolerant vision of the UAE’s founding father, Sheikh Zayed, but also in the teachings of the Koran. As Sheikh Nahayan likes to point out, “The Holy Quran directs us when it says that ‘There must be no coercion in matters of faith.’”

Interpretation then is the key. In traditional Saudi Arabia and the new Egypt led by the Muslim Brotherhood, there are laws which forbid Christians to proselytize or worship in their homes. Christan men may not marry Muslim women (although Muslim men may have Christian wives). Apostasy—converting others from Islam—is a crime often punishable by death. Militant Islam makes much noise in the often brutal enforcement of such rules. The UAE has similar laws but interprets them differently. For example, proselytization is defined by the authorities as “indiscriminate distribution of literature, manipulating or coercing others to change their religious faith and brainwashing.” As the Rev. Andy Thompson comments, “These methods would not be understood by Christian churches as a means of evangelism or sharing faith,” pointing out that in the UAE church, bookshops are open to any passerby. Yet it is well understood that discretion has often been the greater part of Christian valor in allowing the growth of faith in this country.

With the Arab Spring still simmering away in a state of “work in progress,” it is too early to take a view as to whether the moderates or the militants will win in the end, particularly on the issue of respect for non-Islamic religions. Even in the theocratic state of Saudi Arabia, the mutawa, or religious police, are becoming a national joke. The Kingdom’s new 61-year-old monarch-in-waiting, Prince Muqrin bin Abdulaziz (an ex-RAF trained fighter pilot) is both a moderate and a modernizer. He will have noted that the UAE has steered through the upheavals of the region with scarcely a political tremor. This is because the Emirati uphold an unwritten rule: “No religious extremists here.” As a result, the UAE, while true to its Islamic roots, is a remarkably successful and peaceful society. It has a lot to teach the rest of Islam, not least in its tolerance of other faiths.