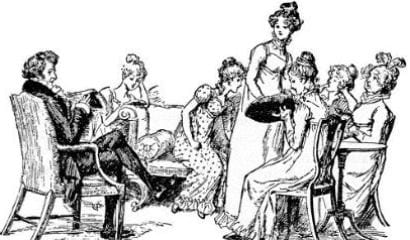 THE 200TH ANNIVERSARY of the publication of Pride and Prejudice in January seems a good opportunity to celebrate not only the fiction of what my university used to call “the English moralists,” but the moralistic tendency in art itself. Although most moralizing in the popular arts today is political or quasi-political in tenor and therefore not really moral at all—the aim of politics today being the abolition of badness and therefore the obviation of any need for goodness—there are still moral dramas to be met with here and there to remind us that the thing can be done, even in an age as suspicious of morality as ours is. Among this year’s Academy Award nominees for Best Picture, for instance, at least four of the nine—Silver Linings Playbook, Amour, Les Misérables, and Life of Pi—require their heroes to undergo what looks like a process of moral development, although it is not always one that would have been recognizable as such to Jane Austen.

The most familiar to her way of looking at the world and, therefore, my favorite for the award is Silver Linings Playbook by David O. Russell. There, Bradley Cooper’s Patrick Solatano gets his moral education in the course of falling in love with an attractive young widow named Tiffany (Jennifer Lawrence), who lives down the street in his working-class Philadelphia neighborhood. That he does so almost without being aware of it while dancing with her adds to the Austenian feel, but the film’s moralism gets a bit mixed up, as moralism tends to do nowadays, with therapy. Patrick suffers from bipolar disorder brought on, apparently, by a crisis in his marriage to an unfaithful wife. Getting his life back onto an even keel would seem to be more a prudential and therapeutic imperative than a moral one, but the film’s putting the process into a romantic context of self-discovery creates a not entirely un-Janeite sense of morally founded felicity.

Michael Haneke’s Amour looks at romantic love from the other, more melancholy end, as the aged French couple of Jean-Louis Trintignant and Emmanuelle Riva must admit infirmity and death among the intimacies to which they find they have signed up during the course of their long marriage. Mr. Haneke, an Austrian who frequently directs, as he does here, in French, places the action all within the couple’s Parisian apartment as a way of heightening the sense of imprisonment already established by their confinement to their failing bodies, and so reminds us that love, too, is a kind of sweet imprisonment—the kind that, in youth, we so often can’t wait to volunteer for. But that also sets up a narrative of liberation that is inevitably political and that Mr. Haneke is powerless to resist—I think to the detriment of an otherwise wonderful movie. Another way to put this is that Mr. Trintignant’s character learns the wrong moral lesson from his experience, but at least he is still operating within the moral universe.

The transition from the moral to the political in Les Misérables is even more jarring and abrupt. Hugh Jackman’s Jean Valjean gets his moral development out of the way in the first half hour of this unnecessarily long movie, and thereafter must cede the field first to poor Fantine (Anne Hathaway) and then to the eponymous misérables, or wretched poor of Paris in 1832. Their indigence and victimization (as we are meant to understand) by social forces may be supposed to exempt them from the demands of moral responsibility to anyone less uptight than the unbending Inspector Javert (Russell Crowe)—and not only themselves but also their middle-class champions in a futile but picturesque French-style revolt against their royalist masters. One such, the romantic Marius (Eddie Redmayne), almost has to choose between devotion to the people’s cause and the lovely Cosette (Amanda Seyfried), but the saintly Jean Valjean spares him from the necessity and us from any further moral reflection except on his own saintliness—which, admittedly, is not nothing, morally speaking.

The moralism of Ang Lee’s Life of Pi is, like that of the non-political bit of Les Misérables, bound up with spirituality. But the film is, even more than Yann Martel’s book on which it is based, an exercise in myth-making. To my taste, however, its ecumenical purposes—the film’s hero, played as an adult by Irrfan Khan, claims to be an adherent of at least three of the world’s major religions—and its suspiciously postmodern indifference to the question of truth as it has traditionally been understood by at least two of those religions, give the movie a quasi-political subtext that gets in the way of its ostensible purposes.

WHAT SPOILS or renders impossible moral analysis, more often than anything other than politics, is the voyeuristic impulse to which most movies today are much more devoted than they are either to morality or to politics. In one way or another, you can see this impulse at work in the other five Best Picture nominees—Beasts of the Southern Wild, Django Unchained, Zero Dark Thirty, Argo, and Lincoln, all of which base their appeal to the viewer at least in part on the promise to reveal things otherwise kept hidden, either because they are known only to the cognoscenti or because they are traditionally among the things that decency or good taste would not allow to be exhibited until relatively recently.

The semi-savage existence of the socially marginal characters living on a low-lying island off the coast of Louisiana in Benh Zeitlin’s Beasts of the Southern Wild belongs to the former kind. An obvious example of the latter is Quentin Tarantino’s appalling Django Unchained, which has very little to recommend it to anyone who is not entertained by simulations of violent and bloody death. The movie is as contemptuous of moral subtlety and nuance as it is of history, good taste, or even good sense, but it is able to use the moral unassailability of its anti-slavery, anti-racist principles as a kind of shield, under the protection of which it indulges its sick pleasure in images of bloody murder freed from any tinge of conscience or regret. That so many critics, not to mention the Academy, have been disposed to take it seriously as an example of the cinematic art suggests that that art has fallen on hard times indeed.

Kathryn Bigelow’s Zero Dark Thirty is an altogether more serious and interesting work, but it, too, must be supposed to base its appeal at least partly on the voyeuristic impulse awakened by its much-criticized scenes of torture. Indeed, these scenes are almost all that anyone is talking about—not because of their disgustingly graphic depiction of physical suffering, but because they are allowed to imply that torture, at least in the case of America’s tracking down and killing of Osama bin Laden, “worked.” It might be thought odd that historical inaccuracy (if that is what it is) should be made so much of in this movie and so little of in Mr. Tarantino’s. “It’s only a movie” will apparently go only so far in excusing historical license these days. But the difference also has to do with Miss Bigelow’s implied claim, which Mr. Tarantino never bothered to make, to have revealed the hidden truth about the hunt for Osama.

Ben Affleck’s Argo also professes to tell a little-known true story for the first time on the big screen, and he also takes liberties with the facts in order to tell it in an interesting or compelling way. In order to do so, however, he has had to offend no one’s sense of what is right and decent—or no one outside of Iran, anyway—so no one cares very much. And that goes, too, for his highly tendentious telling of the history of American interests in Iran, since it fits in with the worldview of Hollywood’s bien-pensants, as Miss Bigelow’s history, of course, does not. The same is true of Lincoln, which, for all its virtues, offers little to challenge the assumptions of the viewer-voyeur, except in the flattering sense that he will be gratified to learn from its lifting of the veil on a national myth that the 16th president was as much of a shady operator as he has always known every other politician to be.

The voyeur, that is, demands nothing more of what he sees than that it should confirm his prejudices. Daniel Day-Lewis’ Lincoln comes to us morally fully developed, like Athena from the head of Zeus. Any moral struggles he has engaged in are by now long in the past, and he can only challenge us to accept that self-evidently moral ends can sometimes only be achieved—such is the nature of politics—by morally dubious or even flatly immoral methods. There are no agonies of conscience about this; it is simply the fact, and if we can’t deal with it, we must be swept aside like Lincoln’s own unreliable political allies. Why that dubious point of view is allowed to pass in this case, and so emphatically not allowed in that of Zero Dark Thirty, I leave it to the reader to decide.