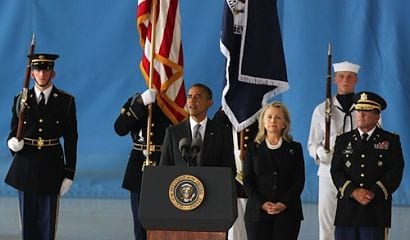 Write in haste, repent at leisure.

The article that appeared in this weekend’s TAS under the title “Obama Fiddled While Benghazi burned… and an election approached” was one that I wrote racing against a deadline.

While there is nothing I want to take back from this weekend’s article, there are many things I’d like to add… for the sake of readers who believe, as I do, that this story — this shameful but instructive story of dereliction of duty in the highest office of the land — should not be allowed to fade into the dimly remembered past like a bad dream that is soon forgot.

For those who have paid close attention to the debate over Benghazi over the past five months (and it became a debate even before the clock struck midnight on Sept. 11, 2012), U.S. Defense Secretary Leon Panetta’s testimony before the Senate Armed Forces Committee on Thursday, Feb. 7, marked a real turning point.

In answering “no” to a few simple questions, Panetta blew up the notion that the president and his team did the right thing on the night of Sept. 11 — that they stayed awake worrying about the fate of Ambassador Stevens and the others trapped at the consulate… and set about working on some kind of a rescue mission.

The president left Panetta and Joint Chiefs of Staff Chairman General Martin Dempsey with the barest of instructions: It was “up to them” to decide the proper response.

“You’d think” — as one reader of this weekend’s article commented — “this guy (Obama) was average Joe on his bowling night, not my problem.”

Blaming the video / Ignoring the threat
In his briefing on Sept. 13 — the day after the news of the death of the American ambassador to Libya and three other staffers — White House spokesman Jay Carney made the incredible claim: “This is not a case of protests directed at the United States writ large or at U.S. policy; this is in response to a video that is offensive to Muslims.”

UN Secretary Susan Rice broadcast the same message — blaming the video and ignoring the real threat to U.S. and other Western democracies coming from Islamism — in doing a round of Sunday talk shows on Sept. 16.

Obama was still blaming the video for the outbreak of violence all around the Middle East as late as Sept. 26, when he addressed the United Nations. And right up the Nov. 6 — and indeed right up to the present moment — the president has continued to repeat the mantra that Osama bin Laden is dead and Al Qaeda is on the run. There were several variants of that in last week’s State-of-the-Union address, including the assertion that “the organization that attacked us on 9/11 [2001] is a shadow of its former self.”

Whenever Obama speaks of outreach to the Muslim world, he sounds like a professional diversity trainer at a big corporation worried about lawsuits from disaffected employees — someone who fritters away his time in dishing out politically correct pablum to captive audiences.

It is time that the president stop believing his own rhetoric — and wake up to what is going in the real world. He could start by listening to what the Islamic extremists are really saying — which is not that they want to live in harmony with people of other beliefs and value systems, but rather that they want to undermine and destroy their governments, their institutions, and their whole way of life.

In his latest book Notes on a Century, Bernard Lewis, the great Middle Eastern historian, dismisses the notion that Islamists — or Muslim fundamentalists, to give them another name — are overly sensitive to criticisms of the Koran; rather, they are always spoiling for battle, and will take any excuse that comes along. He writes:

Muslim Fundamentalists are not worried about liberal theology because there isn’t any, and they are not worried about criticism of the Koran because that is not an issue. Muslims believe in the literal divinity and inerrancy of the Koran text. But that’s not the point. The Fundamentalists are concerned about something quite different, which is what they see as the de-Islamization of Islamic countries. What they want is to restore the Holy Law of Islam (Shari’a), to remove legal codes that have been imported from abroad, and to restore the full panoply of Islamic Law. They have an encyclopedia of grievances, the most important of which is the emancipation of women. In the speeches of Khomeini and the writings of other Fundamentalists, that outranks all other grievances by far.

In his new book, Lewis goes on to say:

As a close watcher of both events and discourse in the Muslim world, I was appalled but not surprised by the events and attacks of 9/11 (2001). As the militants saw it, they had completed the first phase on the path to Muslim domination — the expulsion of the infidels and their armies from the lands of Islam. The next and final step was to carry the battle to the enemy’s homeland to inaugurate the final struggle between the true believers and the unbelievers for the mastery of the world and bring about the final universal triumph of their cause.

This brand of Muslim extremism has been on the rise for more than four decades, and it was considerably stronger on 9/11/2012 than it was on 9/11/2001 — as witness the recent installation of an Islamist state in Egypt — the largest country in the Middle East and, for many, many years, one of the most westernized and moderate.

Enter Charles Woods, father of Tyrone Woods, the slain former SEAL
Enter — we may say — and quick exit, as far as having any impact on the Nov. 6 election.

On Sept 14, Obama, Hillary Clinton, and Joe Biden went to Andrews Air Force Base to be there to be part of the ceremonies when the coffins of the four American victims of the assault on the consulate arrived.

Later, they would all boast of the grief they felt.

In his second debate with Mitt Romney, Obama declared that he was there “greeting the caskets and grieving with the families… and that the suggestion that [he or] anyone on his team was playing politics or misleading the American people, governor, is offensive.”

Then there was the outrage (or feigned outrage) of Hillary’s “What’s the difference” tirade in her long-delayed Congressional testimony on January 24. She too backed this up with an emotional account of going to receive the coffins of co-workers.

And then there was Biden with his usual weird and oafish behavior.

At Andrews Air Force base, all three of them managed to offend Charles Woods, the father of Tyrone Woods, the slain former SEAL.

Later, on Fox News, Charles Woods told Glenn Beck that Obama “would not look me in the eye” and seemed to have “no remorse.”

He said he was stunned when Hillary told him that she would make sure that the person who made the video “The Innocence of Muslims” would be arrested and prosecuted. “She had to know she was not telling the truth,” Woods said.

And, finally, and most embarrassingly, there were Biden’s comments — “made in an extremely loud and boisterous voice” — who said, among other things, “Did your son always have balls the size of cue balls?”

My question to the president would be this: Your Honor, I respect your office as president. But if this attack on American citizens, on American soil, happened 2,000 miles away from Washington, D.C. — say in Los Angeles or in Seattle — would you have waited for seven hours before you sent the first airplane? Would you have waited seven hours until the attack was over? Would have waited a couple of days until you had all of the videos and all of the information before you responded in a responsible military way?

Chip Bok, the cartoonist who illustrated my weekend article, did another superb cartoon contrasting how the mainstream media cheered Cindy Sheehan (who lost a son in Iraq and became a national hero for camping out on George W. Bush’s doorstep) and ignored Charles Woods. This was history in the making and, I fear, a nation in the unmaking.

Presidential Dissembling
In late October of last year, President Obama was caught off guard by a local Denver TV reporter, Kyle Clark, who, so unlike the White House press corps, persisted in asking real questions. Twice Obama refused to say whether the Americans under siege in Benghazi were denied requests for help.

But then he said:

Well, we are finding out exactly what happened. I can tell you, as I’ve said over the last couple of months since this happened, the minute I found out what was happening, I gave three very clear directives. Number one, make sure that we are securing our personnel and doing whatever we need to. Number two, we’re going to investigate exactly what happened so that it doesn’t happen again. And number three, find out who did this so that we can bring them to justice.

But no one has been blamed or brought to justice — least of all those at the pinnacle of government.

Those who have retained the ability to think straight and act with courage need to wrest control of the past from the present-day masterminds who, if given the chance, will destroy everything.