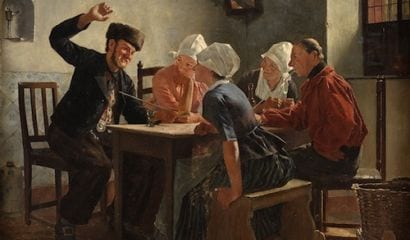 MOBILE, Ala. — The despair grows. It metastasizes. It eats away at the sinews of the conservative movement. It leaves gaping holes in our confidence, our energy, and our trust in the salability of our principles. It robs us of creativity, of strategic sense, and of tactical flexibility. And it makes us look and sound less like winners — which, in turn, makes us less attractive in the public eye and thus less likely to actually become winners in the battles we undertake.

Look, this isn’t a lament about the state of affairs in the national consultant kingdom. It’s not a lament about how things look to the conservative world’s parallel version of Official Washington. This despair is what we see and hear in everyday life out here in the (misnamed) “red state” America, where ordinary small businessmen, housewives, doctors, professional women, and middle-(fixed)-income retirees all express deep nervousness about what the country’s future holds. They think Barack Obama’s regulatory agenda is abusive and his expansion of executive powers dangerous; they think the establishment media isn’t just biased but corrupt; and they think the culture, especially among those under 30, is almost hopelessly lost.

And they see almost nothing from conservative leaders, inside or out of government, that gives them confidence in those leaders’ abilities to reverse the current political tide.

In terms of sheer arithmetic, the despair does not need to prevail. The beyond-the-Beltway attitudinal right-leaners really do form a powerfully large voting bloc, still perhaps a majority, which was aptly described by Grover Norquist several years ago as the “Leave Us Alone” coalition.

Unfortunately, these Leave-Us-Alone citizens have trouble winning elections specifically because one thing from which they want to be left alone is politics. Normal people with well-balanced lives want to do their jobs; carpool their children; volunteer a little bit for some church or civic functions; and finagle a few hours a week, amidst weekend chores, to relax at a movie or on a fishing pier or in tending their gardens. They are good citizens and they think good citizenship is important, so they’ll donate a little money here or there for right-leaning causes, or they’ll find an afternoon to make phone calls for some political candidate every few years, and of course they’ll go to the polls at least for “significant” elections.

But because their lives don’t revolve around government or politics — because they want to be left alone in order to do all these other, ordinary things — they aren’t inclined to become a political army of the sort that Barack Obama and the compulsory unions are engaged in directing, and that George Soros and the Ford and Tides foundations are busily financing.

A well-known mantra of the left is that “everything is politics” — and it is precisely because attitudinal center-rightists believe otherwise that it is difficult for us to win. Those who play politics will usually win at politics against those who don’t want to play politics.

What’s more despair-inducing is that those who aren’t inclined to think first in terms of politics are therefore less likely to think that political trends can be reversed by merely changing political strategies, tactics, consultants, or messages. Conservative activists, especially in the Washington orbit, might be convinced that we can defeat the Obamite hordes by sticking it to the Republican establishment or “getting some backbone” or talking more about Issue X or Cause Y. But that’s not how it looks from The Real America.

The Real American sees Obama win two straight elections, sees young people twice vote for him overwhelmingly, sees news headlines about demographics moving against conservatives, and sees the steady abandonment of the link between child-bearing and marriage. The Real American sees government getting bigger and bigger, and sees people lusting after “free stuff” without paying taxes. He sees these things, and he worries that the country is doomed to Obama-induced decline.

To be clear, it’s not as if there is absolute panic out here in the hinterlands. But there are lots of little conversations, furtive asides, half-spoken concerns that this time, there’s no road back. Everybody asks, plaintively, if “we” have somebody, anybody, who can save the day in 2016 (if it’s not already too late by then) — because right now, nobody has really emerged from the crowd.

Come to think of it, maybe “despair” is too strong a word for the attitude out here. But “concern” isn’t strong enough. What I hear, when people do talk politics — which, again, is nowhere near as often as it is in DC, because people actually talk about children and fishing and football — is a deep and profound unease.

People to whom I talk are really, really eager for a political dynamo to burst forth, to sound both reasonable and inspirational, and to show a real crowd-pleasing ability that can put Obama to shame.

What I do not hear, though, is a cry for some sort of ideological crusade. I don’t hear determination to get everything right at once. Yes, the desired outcome is definitely rightward. But people don’t expect perfection, nor does everybody agree on all the particulars. What they want to see first is just some definite moves in the right direction. They want to see a regulatory burden lifted here, some bureaucrats being more responsive there, and a sense that the government won’t impose every last iota of its leftist cultural agenda on their churches, their volunteer organizations, their workplaces.

The message is: Stop the disaster first. Then go for the gold.

There will be time enough, if only barely, for a “savior to rise from these streets.” What’s needed urgently is a leader who at least can effectively block and tackle. People won’t start to believe in big victories again until they start to see some small ones. It’s not that people aren’t yearning for big wins; it’s that they need some confidence-building successes before they are willing to risk the effort needed to go for broke on the larger battles.

All of which leaves us… well, where, exactly?

Well, first, it means that in terms of approach, Paul Ryan might be on the right track in urging a marriage of well-chosen aggressiveness with a little bit of prudence. It also means that conservatives need to relearn the art of telling a narrative, which was one of Ronald Reagan’s greatest strengths. (Credit to Fred Barnes, by the way, for highlighting both of these ideas in recent articles.) A narrative is needed not just to persuade the undecided or to change minds about policies — although both goals are, of course, tremendously important — but also to give allies a sense of how and why things can get better. The “Real Americans” (a moniker used only as a convenient shorthand) aren’t paying rapt attention to politics, which makes it all the more necessary for them to hear, in those times when they do pay attention, that there is a believable counter-narrative to the lies of leftist inevitability peddled by the establishment media.

The soul-sapping feeling of deep unease I’ve described here in the hinterlands can be lightened, and reversed, only if somebody tells an alternative story that resonates with everyday lives.

Dr. Ben Carson did some of that the other day, which is why he suddenly is such a cause célèbre on the right that some are ludicrously suggesting that he run for president. The calls for a Carson presidency, without any other background in statesmanship or large organizations or politics, are a sign of just how deep the desperation has become.

(By all means find a serious office for Dr. Carson to target; but when was it ever a conservative idea to think somebody should start at the top?)

The lesson from Dr. Carson, though, is that few of our elected leaders have this sense of narrative, and that even fewer marry the narrative with solid principles and with the sense of how to weigh means against achievable ends. Mike Pence of Indiana has some narrative abilities; so does another Indianan, Mitch Daniels. Almost nobody in Washington, however, seems to boast those skills.

The unease in Real America won’t start to lift until a significant elected leader on the right starts using narrative skills to achieve small but clear victories. Despair is a real enemy, and right now it’s not an unreasonable feeling for Real America to have.

Not unreasonable — but not irreversible, either. Winning begets winning. People who want to be left alone are more likely to make time for politics if they think it might actually do some good.