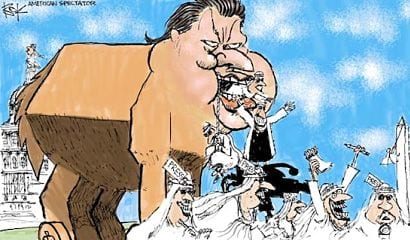 Finally there is good news on the jobs front for the Obama administration. Al Jazeera, or “Terrorism TV,” as it used to be known for celebrating the three thousand Americans killed on 9/11 and other exploits by Osama bin Laden, announced plans to create some 200 jobs in the United States over the next six months — in its headquarters at the UN in New York, in Washington, D.C., and in bureaus in Detroit, New Orleans, San Francisco, and other cities.

“Imagine six or seven years ago, trying to find real estate for Al Jazeera in Washington,” gushed Rob Wheelock, the former ABC executive who is in charge of establishing Al Jazeera in the United States. “We’re going to have signage just like CBS, ABC, CNN, CBN, just like everyone else. We’re psyched.”

Perhaps the signage will include skull-and-crossbones, or some other fitting image of human slaughter.

Yes, as Mr. Wheelock said, it is hard to believe the cable network enterprise that did so many fawning interviews with the late terrorist leader — and others chanting “Death to America” — would have stood any chance of putting up its own news rooms in New York, Washington, D.C., or any other American city during the George W. Bush administration.

And that is another sign of how far our nation has regressed over the past four years.

Even now, with the beginning of the second Obama term, Sheik Hamad bin khalifa Al Thani, the ruler of Qatar, must be rubbing his goatee in disbelief at how easy it is to open a large propaganda network in the United States of America (which, at the outset, will include seven “investigative reporters” in the D.C. office for the presumed purpose of vilifying legislators who oppose Islamic extremism or support Israel).

He spent $500 million to acquire the money-losing and low-rated Current TV — owned by Al Gore and friends — which is still a great catch because it has the potential to reach 41 million homes in the U.S. on cable channels.

Half a billion dollars may sound like a lot of money, but it was no more than a scrap from the oil sheik’s table. Still, it was more than enough to compensate Gore for abandoning his green friends and his green principles — in striking a deal with one of the princes of Big Oil. His portion of the proceeds was one-fifth, or $100 million. Pobre hombre, even though he tried his hardest, he didn’t act fast enough to protect his share of the loot from the higher U.S. taxes that took effect at the beginning of 2013.

Still, Al Gore is doing a great job of following in his daddy’s footsteps to greener pastures in the purely monetary sense. After losing his Senate seat from Tennessee in 1970, Albert Gore Sr. used his political connections to help oil baron Armand Hammer, the head of Occidental Petroleum, which struck it rich in Libya with the help of visas that the elder Gore helped to procure when he was a U.S. senator.

Al Jazeera has two faces. There is the Doha-based broadcast center that has ceaselessly celebrated Islamic extremists (and is also home to Al Jazeera English); and there is newly established Al Jazeera America. Now we are supposed to believe that the face which has always been contorted in the most violent rage is false (or at least receding), while other represents the transition to a peaceful and democratic future.

To believe that, you have to believe that the lion will lie down in peace with the lamb. That is to say, you have to believe that all it will take to quell the Islamist extremists who hate westernization in all its forms — most especially, the emancipation of women and open acceptance of homosexuality, but also including an in-built hatred of democracy and representative government — will be to break bread on a regular basis with politically correct progressives, who share their distaste for free markets and limited government, but nothing else beyond that.

And Obama is clearly one of those believers in the lion lying down with the lamb. Said Obama to a group of political donors: “He [the Emir] is a big promoter of democracy all through the Middle East. Reform, reform, reform — you’re seeing it on Al Jazeera.”

In fact, on Obama’s watch, Egypt, the largest and long one of the most westernized and open countries in the Arab Middle East, has fallen under hard-fisted and increasingly intolerant Islamist rule — and other countries are following.

While the Qatari Emir is rich beyond belief — and able to host major tennis and golf events — he is also using his money to foment unrest around the region — contributing to Hamas, Hezbollah, and others who regard America as the “Great Satan.”