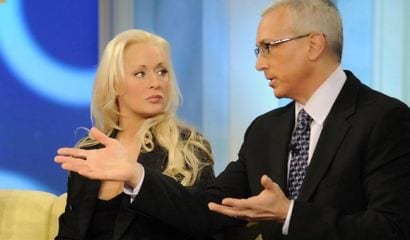 Country singer Mindy McCready’s life caught up with her career earlier this week. “I’m saddened to hear of her passing, but I’m not surprised,” former fiancé Dean Cain told People. “All her troubles were self-inflicted.” This includes her final trouble, which leaves two boys motherless.

If Superman couldn’t put McCready back together, why did Dr. Drew assume that he could?

McCready becomes the fifth patient of Dr. Drew’s Celebrity Rehab to transcend addiction through bodily transcendence. Unwitting riot catalyst Rodney King, Alice in Chains’ bassist Mike Starr, Taxi and Grease actor Jeff Conaway, and Real World resident Joey Kovar all passed shortly after Dr. Drew treated them. The smiling doc may not look like the grim reaper. But many of his patients behave as though they have seen him.

Physicians do wonders with broken legs. Their success rate on broken hearts ranks somewhere below Mario Mendoza’s success with curveballs. Rehab-style treatment works for doctors. Patients? Not so much. Rehab can serve as a chemical respite. But with addiction it’s the patient rather than the doctor who holds the cure. Doctors can perform many miracles. Living our lives for us isn’t one of them.

Dr. Drew, like Mindy McCready’s friends and loved ones, wielded little power over her decisions. She attempted suicide numerous times, went Murphy Brown with two children, starred in the obligatory celebrity pornographic video, lost custody of her offspring, and got arrested for OxyContin possession. Her earlier bad decisions made her final bad decision for her.

Rehab, which rarely succeeds away from the cameras, seems a riskier proposition in front of them. Surely McCready’s CV of stupidity made her a not-ready-for-primetime player. Perversely, in the perverse world we inhabit, that made her a suitable candidate for a starring role on the small screen, which strives to earn that diminutive description. Her downfall was our entertainment. Who’s sick?

Never trust a doctor who follows an initialized professional credential with a first name. It’s manipulation, as Dr. Ruth and Dr. Laura understood before Dr. Drew did. Like blue jeans and a tie, or a dress and sneakers, the title prefacing the first name sends a mixed message. It announces detached authority while inviting warm familiarity. Even a medical aficionado as esteemed as Dr. Demento subscribes to formal conventions regarding title and surname (as well as in dress).

We first met Dr. Drew as a Loveline cohost giving advice to call-in teenagers about love and lust. He shifted to chemical dependency of another sort on Celebrity Rehab, where he encountered McCready and other basket cases trying to right their lives on television, and then shifted back to his initial broadcast passion through Sex Rehab. He similarly counsels and consoles the schoolgirl mothers on MTV’s Teen Mom. Like many seedy adults, Dr. Drew hangs around with teenage girls, narcotics users, and sex perverts all too much.

What Dr. Drew does is creepy. How he acts isn’t. He seems knowledgeable, caring, and, on occasion, willing to issue tough love. A few of his patients — Mackenzie Phillips and Tom Sizemore come to mind — emerged from his care better than they entered it. Dr. Drew’s real talent is in how he makes his viewers rather than his patients feel. His success in relieving us of the need for a post-program shower may stem from his success as a performer. Dr. Drew, television talk show host, veteran voice of advice radio, friend to teen moms, reality-television star, and physician to addicts of all sorts, also acts in scripted shows and movies.

Ultimately, he understands his patients because he shares their primary addiction. Dr. Drew, as much Mindy McCready or Jeff Conaway once did, joneses for the limelight. As demonstrated by his patients’ Sunset Blvd. moments — broadcast to the world on VH1 rather than suffered privately in a darkened room — celebrity is a hard drug to kick.