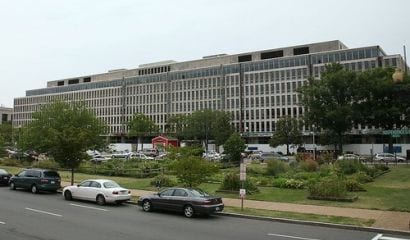 Trending
To Fully Comprehend Trump, an Insight Into the Jargon of NYC’s Outer Boroughs
by Dov Fischer
The Great Liberal Freakout Has Begun
by Robert Stacy McCain
Maybe the Coronavirus Will Teach Millennials the Dangers of Communism
by Melissa Mackenzie
Sign Up to receive Our Latest Updates!
Register
Hot Off
The Press
Hither and Yon
GIRL Power Could Be Deadly for Dems in 2020
by Scott McKay
Flynn Files
Brokered Beats Broken
by Daniel J. Flynn

And House Republicans seem to be asleep.

On Monday’s front page was the latest Obama horror story of what lay ahead for the fifty states if the sequester went into effect. Wrote the Post:

The White House on Sunday detailed how the deep spending cuts set to begin this week would affect programs in every state and the District, as President Obama launched a last-ditch effort to pressure congressional Republicans to compromise on a way to stop the across-the-board cuts.

…. Lawmakers instead were planning for a lengthy round of political jostling ahead of another budget showdown in late March that could determine whether the $85 billion in cuts to domestic and defense spending this fiscal year stick.

Catch the magic number? The terror is about finding “…$85 billion in cuts to domestic and defense spending…”

Remember this Reagan pledge (bold emphasis mine) — as recorded in the 1980 Republican Platform?

Next to religious training and the home, education is the most important means by which families hand down to each new generation their ideals and beliefs. It is a pillar of a free society. But today, parents are losing control of their children’s schooling. The Democratic Congress and its counterparts in many states have launched one fad after another, building huge new bureaucracies to misspend our taxes. The result has been a shocking drop in student performance, lack of basics in the classroom, forced busing, teacher strikes, manipulative and sometimes amoral indoctrination.

The Republican Party is determined to restore common sense and quality to education for the sake of all students, especially those for whom learning is the highway to equal opportunity.…We understand and sympathize with the plight of America’s public school teachers, who so frequently find their time and attention diverted from their teaching responsibilities to the task of complying with federal reporting requirements. America has a great stake in maintaining standards of high quality in public education. The Republican Party recognizes that the achievement of those standards is possible only to the extent that teachers are allowed the time and freedom to teach. To that end, the Republican Party supports deregulation by the federal government of public education, and encourages the elimination of the federal Department of Education.

The President was serious.

The Congress was decidedly of another mind.

On September 24, 1981, Reagan made a televised speech to the nation in which he reiterated his proposal — and reminding of another pledge he had made about another Cabinet Department as well. Bold emphasis again mine:

As a third step, we propose to dismantle two Cabinet Departments, Energy and Education. Both Secretaries are wholly in accord with this. Some of the activities in both of these departments will, of course, be continued either independently or in other areas of government. There’s only one way to shrink the size and cost of big government, and that is by eliminating agencies that are not needed and are getting in the way of a solution.

The response from hysterical Democrats to the idea of abolishing these Jimmy Carter-created Cabinet Departments that were even then barely three years old? Here’s the late Massachusetts Senator Ted Kennedy channeling the President Barack Obama of today:

“This is government of the rich, by the rich, and for the rich.”

So, of course, the idea was, as liberals loved to say of Reagan budget proposals in the day, “dead on arrival.”

According to the Obama-run U.S. Department of Education (found here) the department’s current budget of discretionary programs is $68.1 billion.

Which is to say, if the Department of Education were eliminated wholesale and the $68.1 billion applied to the sequester, the sequester would amount to a less than piddling $16.9 billion.

So what horror stories float today about the sequester and education?

Reports the horrified Post, using administration figures to scare the political bejeebers out of the Speaker of the House:

Hundreds of teachers could lose their jobs in Ohio, home to House Speaker John A. Boehner (R), officials said…..

The paper runs twelve charts for readers to click on and see the supposed unfolding catastrophe that lies ahead, the very first chart focused on “Teachers and Schools,” with readers being able to click on a state to see the effect of the sequester in the following categories:

To pick my own state of Pennsylvania, one is told:

Where are House Republicans?

This is exactly the problem Reagan was warning about. When one injects the federal government into American everyday life — in this case education here in Pennsylvania — the effect is essentially that of forcing Pennsylvania educators to snort fiscal cocaine. The state is now hooked on federal education funding. To withdraw it? Gasp! The educational version of cold sweats have begun.

No one will stop to ask: How did the Commonwealth of Pennsylvania get along from the beginning of the Republic in 1787 until 1978 — 191 years — and yet manage to educate its kids without the existence of the U.S. Department of Education? And, being one who is a graduate of both a Pennsylvania public high school and a Pennsylvania private college (Franklin and Marshall College, as it happens, dates from 1787) — how did the Commonwealth manage to educate the bulk of those kids well? Kids from all economic backgrounds, all races and both genders?

The response will surely come — as it does with every proposal to eliminate anything large or small in the federal government — that the Department of Education is, don’t you know, indispensable. That the $68.1 billion budget for the federal Education Department (not to mention the 5,000 federal employees it has gained as the Cabinet’s smallest (!) department) is critical to educating America’s kids — and without it the nation will collapse.

What’s going here in this sequester discussion is precisely what our friend Mark Levin has discussed in his bestseller Ameritopia: The Unmaking of America.

The real reason for the existence of the U.S. Department of Education is, to borrow from Levin, “the perfectability of mankind” — in this case through the establishment of a federal educational Leviathan. Without it, perfection cannot possibly be attained. Levin cites Alexis de Tocqueville on the power of the state (and here that would mean the federal government) thusly:

It covers the surface of society with a network of small complicated rules, minute and uniform, through which the most original minds and the most energetic characters cannot penetrate, to rise above the crowd.

Say again: a network of small complicated rules. Minute. Uniform. Through which the most original minds cannot penetrate.

In this case, a “network of small complicated rules” has been injected into the American state and local educational system via, to quote the Obama Administration through the Washington Post, “funding for primary and secondary ed,” “the number of students served,” “the number of schools receiving (federal) funding,” the federal amount of “funding for children with disabilities” and funding “in staff for education for children with disabilities.”

All of this in search of a utopia that does not — and never can exist. Or as Levin calls it, Ameritopia.

And the thought of withdrawing all of this funding?

Panic. Which is exactly what the President is doing his best to induce.

The idea is to drive Americans — Republicans in particular — to their congressman’s office angrily demanding that their share of the pork pie not be reduced, much less eliminated. In the case of education and the sequester, it will be all those on the receiving end of that federal funding listed above.

Of course not. It would get nowhere in the Harry Reid Senate, much less past the President’s veto pen.

That, at this point, isn’t the point.

The issue is something else entirely.

Is all this limited government rhetoric just so much cotton candy for the base?

Or is the GOP in fact serious about this?

Let’s recall that it wasn’t the Obama Administration that got the No Child Left Behind education ball rolling. It was the Bush 43 administration, urged on by Karl Rove and partnered by — yes — Ted Kennedy and John Boehner. In his memoirs, President Bush himself would write that it was “unrealistic” to lead the charge to eliminate the Education Department. So — he expanded it instead. Karl Rove boasts in his own book what a positive political achievement this was for the GOP — in spite of the fact that Bush barely won his re-election, the Bush White House lost the House in 2006, and nominees McCain and Romney got clobbered with me-too stances on education.

Which is to say these Republicans not only ignored Reagan’s point, they went out of their way to do the opposite.

Are House Republicans willing to begin the always needed educational process (note that word educational) of illustrating to the American people just why the old industrial-era idea of centralizing every single issue in America is no longer a smart thing in the 21st century? Is the House GOP willing to begin making the case that building concrete boxes on the Potomac and stuffing them with thousands of well-paid bureaucrats is not only not the answer — it isn’t the future?

This is well aside from the obvious issue at hand: the force driving the sequester.

Plainly to conservatives the U.S. is headed to bankruptcy if it doesn’t start cutting back on its addiction to all things government spending. The notion that the U.S. is borrowing from China to fund a federal spending addiction on education among other things — many other things — should be a non-starter.

The entire situation reminds uncannily of all those liberals who spent the 1930s insisting that the government should be increased in size to provide jobs and more to young Americans — and that we should just ignore what was going on in Europe with the rise of Hitler.

Americans bought that idea — and some 400,000 young Americans who spent the thirties “benefiting” from the New Deal wound up dead on a European or Pacific battlefield.

What looms ahead for the United States is financial disaster.

If that issue isn’t dealt with — and soon — the American people will have a lot more to worry about than whether the US Department of Education and its bureaucrats making nice salaries can survive. And all those kids who are paraded forth as beneficiaries from a must-have federal education bureaucracy? A bureaucracy that didn’t even exist until 1978?

These kids — and their kids — will grow up in a world in which the angry refrain will be “my parents bankrupted the country and my future so for the bureaucrats in the Department of Education.”

There are surely any number of places in the government that could be used to begin the limited-government debate in serious fashion. But for reasons as real as they are symbolic — it was Reagan’s first choice — there is one place that is as good as any to start.

Education and bureaucracy are not synonymous.

The question is: are there any House Republicans willing to stand up and say so?

Then do something about it?

By introducing a bill that, as Ronald Reagan suggested, would abolish the Department of Education because, to quote Reagan’s 1980 platform:

The Republican Party is determined to restore common sense and quality to education for the sake of all students, especially those for whom learning is the highway to equal opportunity…