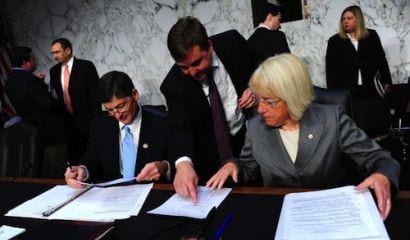 Just about every article I’ve read on the sequester says that the $85 billion in mandated cuts from discretionary spending in the federal government’s fiscal year 2013 budget will decrease GDP by about 0.6%. But is this true? As is the case with much of what has been written about the sequester, the answer is, “not exactly.”

The 0.6% number comes from the Congressional Budget Office, though many economists have come up with similar estimates. The fact that government spending has an affect on GDP is not controversial. The definition of GDP, after all, includes government expenditures. The big question is what is the multiplier — how much does every dollar of government spending increase GDP, or conversely, how much does every dollar of reduced government spending reduce GDP? The CBO has estimated that the sequester cuts, on average, have a multiplier of about 1.1. That is to say, $85 billion in cuts will result in about $93 billion in reduced GDP. The $85 billion in cuts, however, pertains to budget authority and the real cuts to take place in fiscal 2013 are only about $44 billion, so using the CBO multiplier of 1.1 the actual calculation would be more like $48 billion of GDP, or about 0.3% of a $16 trillion economy.

Therefore, if the CBO is right, the sequester, if left in place, will reduce GDP in 2013 not by 0.6% but by 0.3%. But there is still a big problem with this calculation. That problem is that the proper multiplier is not 1.1, but something far closer to zero. But surely, some will say, if government spending is part of the calculation of GDP, then a decrease in government spending must decrease GDP by a similar amount. Well, not exactly. If this were really true after all, all we’d need to do to usher in prosperity would be to increase government spending (and we just tried that).

Let’s look at a little history. In 1990-91, similar to 2008-09, we had a financially induced recession (the savings and loan debacle). Over the 13 quarters after the end of the 1990-91 recession, per capita GDP increased by 7.2%. Compare this to the current recovery in which per capita GDP increased by only 4.44% over 13 quarters. From fiscal year 2009 through fiscal 2011, however, the Obama administration doled out additional special “stimulus” funds totaling $494 billion and billions more were spent through the first half of fiscal 2012 (not including the Trouble Asset Relief Program’s assistance to financial institutions and the auto bailout). If government spending really did have a 1.1 multiplier (or much higher than that, as argued by President Obama’s Council of Economic Advisors), per capita GDP growth after the 2008-09 recession should have exceeded that of 1990-91 by at least 3.5%. In reality, it was almost 3% less.

It is true that the 1990-91 recession is not completely analogous to 2008-09, and the United States is not the Czech Republic or Switzerland. Nonetheless, these real world examples put the theory of a significant GDP multiplier for government spending into question.

Now let’s take a look at some economic theory. The CBO estimate relies on the Keynesian notion that if government spends money, the recipients in turn spend more, thus creating economic growth. This may by true to some degree under some circumstances. But every dollar the government spends comes from somewhere. In the current case, every marginal dollar the government spends is borrowed and about 60% of new federal government debt is being “bought” by the Federal Reserve. This spending is, therefore, by definition, inflationary. So, if you “create” an extra 0.3% in GDP through government spending, but in the process increase the general price level by 0.3% through an increase in the money supply, at the end of the day you have achieved nothing — real GDP will have remained unchanged. Of course, all of these changes are not instantaneous. At first, the increased spending/increased money supply will likely spur economic activity, but over time the induced inflation of price levels will in essence counteract the value of the stimulus. That is consistent with the observed reality of the current recovery — fitful, uneven, and over the long-term, flat.

It is also important to note that not all spending is equal. Spending that increases economic growth in the medium to long term has to be productive spending. Much of what we saw in the Obama stimulus package was unproductive. Spending $2.5 billion to bring Internet access to a few thousand rural residences at a cost of nearly $350,000 per household, or millions for university social science research grants, or $2 million to build a fire station that had no firemen to house, or $20 million to put up road signs declaring that the stimulus spending is putting Americans to work, to name but a few examples, does nothing to promote actual economic growth. Moreover, given the obvious temporary and unsustainable nature of many of the stimulus projects, the various businesses involved likely avoided as much as possible hiring on new full-time employees, knowing they’d likely need to shed them in the near future. Wasteful spending only serves to divert resources away from more productive activities (both public and private), and so it not only fails to generate real economic growth, it actually impedes it.

The sequester is not the best way to trim spending, but it is difficult to believe that the federal government operates so efficiently that most agencies will have a hard time functioning if forced to cut their budgets by a few percentage points. The Defense Department, which is hit the hardest by the sequester, has announced that it may need to reduce aircraft training flight time and shorten naval deployments. This may be undesirable from a national security standpoint, but spending less on fuel (much of which is imported) and having sailors spending a little more time at their U.S. home bases rather than at sea or at foreign locations will not harm the economy. On the contrary, those cost reductions might actually have a net positive impact. Given the across-the-board nature of the sequester cuts, some cutbacks will be truly regrettable. But the sequester will force government agencies to do something they rarely are compelled to do — take a hard look at how they operate and identify inefficiencies and unnecessary expenditures. No doubt many bureaucrats will not be up to the task, but it is still something taxpayers have a right to demand.

The only way the sequester reductions can have a meaningful negative impact on growth and employment is for consumers and businesses to cut back on spending simply due to the fear that the sequester cuts will bring hard times. Ironically (or not so ironically, depending on your view of the Obama administration), President Obama has been doing his best to stir up fear. Certainly, the sequester cuts will come in handy as an excuse should all his other initiatives that actually will curtail economic growth — tax increases, costly Obamacare mandates, the regulatory swamp that is Dodd-Frank — cause continued weakness, or even recession in 2013 and 2014.

As demonstrated by his schedule in the weeks leading up to the March 1st sequester deadline, the President had no intention of negotiating a deal with Republicans. Despite his calls for a “balanced” approach to deficit reduction during the 2012 campaign, he will continue to oppose any plan to reduce in any meaningful way domestic spending because he is ideologically committed to the idea of big government and using the power of government to redistribute wealth. Furthermore, he appears to have an overriding political interest in trying to show the cuts as being as damaging as possible so he can advance the argument that spending cuts need to be replaced by more tax increases. Controlling the growth of government spending, however, is the key to sustainable strong future economic growth. Unfortunately, all the argument over the sequester misses the point that the real threat to our long-term national solvency is not so much discretionary spending, but entitlements. If the Obama administration is declaring that cutting discretionary domestic spending by a few percentage points is going to end life as we know it, just wait until we start debating meaningful entitlement reform.