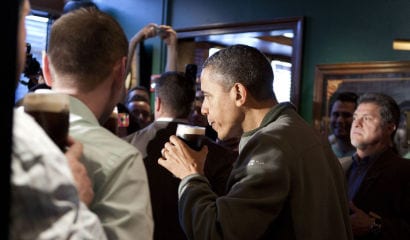 Happy St. Patrick’s Day, if you can afford it. Happier, still, if you can’t. Getting ripped off induces a worse hangover than a fifth of Jameson.

Calls to a few of the nation’s premier Irish public houses reveal prices that will send patrons to the poorhouse. At New York’s Paddy Reilly’s, a pint of Guinness will set you back $7, at Boston’s Black Rose $6.50, and at Chicago’s Cork & Kerry $6. It’s not quite enough to make one a teetotaler; but not so cheap as to prevent one from contemplating a switch to Old Milwaukee.

Bars make a rich man poor. The extortionate pricing, the inflated cover charge, the obligatory dollar every time a bartender hands over a glass, and the expensive cab ride home make yesterday’s normalcy today’s luxury. So, the money-saving pre-game drinking ritual has, for many, become the game itself, with the subsequent bar visit serving as the time to nurse rather than down drinks.

What’s a cheapskate to do?

One option makes wherever you are the bar. In the River Street area of Savannah, a St. Patrick’s Day destination that sagely scoffs at open-container laws, celebrants may roam with booze in hand unmolested by badge-bearing Neal Dows. Elsewhere, one must beware—under the spell of a narcotic that dampens awareness, no less—of the watchful eyes of watchdogs.

If there’s anything that announces “drinking in public” more boldly than a brown paper bag surrounding a peach schnapps bottle, it’s the red keg cup. Even drinking from a shiny flask shows the police more respect than the red Solo cup. Discretion requires imagination and planning. Nothing says “upright, law-abiding Yuppie” louder than a cardboard Starbucks cup. Imploring friends with the revolting habit of morning coffee to double-cup quickly provides an at-the-ready supply of drink disguises. Drinking in public doesn’t offend cops; drinking in public in a public way does.

Nevertheless, police in major metropolitan areas will act as bouncers-in-reverse this weekend, corralling drunks into bars instead of throwing them out of them. “Several hundred Baltimore and state police officers will be saturating the city’s bar districts this St. Patrick’s Day weekend, looking for drunken drivers and people drinking in the streets,” reports the Baltimore Sun. Boston police aggressively ticket parade-goers who passively imbibe. They issued 363 citations for drinking in public in 2011, followed by 244 citations last year. Either you pay the taxman by drinking in the tavern or you pay him by drinking in the street.

March 17 is when we collectively pretend that anti-social behavior is really social behavior. Projectile vomiting, impromptu impersonations of Mickey Ward and Arturo Gatti, and a.m. inebriation rank as a few of the behaviors that the bourgeois share with the bums on the holiday. Like children who wish every day Christmas, a few adult enthusiasts of St. Patrick’s Day make dreams of March 17 24/7-365 come true in nightmare form. Last year I ran, almost, into one of these proponents of St. Patrick’s Day Infinity.

A pile of clothes moving in the road startled and stopped the car. A closer inspection revealed a human being within the garments. Lying asleep, legs on the curb and body in the busy street, the man came within a few feet of knowing the real meaning of last call. Awoken, he communicated to me — just not in any language presently known to earthlings. The first policeman on the scene recognized the gentleman and explained that his unusual napping spot wasn’t unusual for him.

If Betty Ford and Frederick Exley had ever procreated, surely the evidence lay in the street before me. The shamrock on his cap suggested membership in my tribe. It was March 12, meaning that St. Patrick’s Day had become St. Patrick’s Week — if not St. Patrick’s Life — for Mr. Jameson Guinness Ford-Exley. He desperately needed a holiday from his holiday.

The cost of St. Patrick’s Day in the bars and St. Patrick’s Life in the streets strikes me as too high. The example and the prices set have inspired a tradition for St. Patrick’s Day, and the month that surrounds, of sobriety. Go down a dozen Harps. I’ll have a glass of milk.