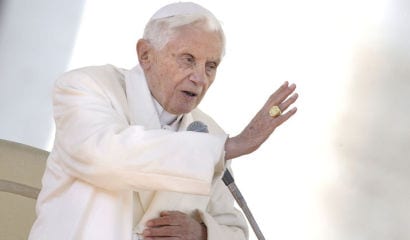 When Pope Benedict XVI announced that he would vacate the Chair of Saint Peter before he reached his expiration date, headline writers the world over expressed shock, and this time it was genuine. Popes do not, as a rule, voluntarily leave their thrones. Every pontiff for the last 600 years had died in office. The suffering unto death of Benedict’s old boss, John Paul II, was a protracted affair followed by a huge spectacle of a public funeral with crowds chanting “Santo! Santo! Santo!”

Benedict made clear he didn’t desire anything like that. He dropped several loud hints during his eight-year papacy that he would abdicate if he no longer felt he was physically and mentally up to it. My sense from day one was that he never wanted to be pope. His papal seal featured a bear with a backpack, a prompt for the legend of Saint Corbinian. The saint had been called to the Vatican. On the way, a bear attacked and killed his packhorse. Corbinian rebuked the bear and told the beast it would just have to carry the horse’s burden on to Rome. The shocked, dumb animal complied.

Whenever Benedict told the story, he compared himself not to the saint but the bear. He lamented that, unlike the bear, he was never again allowed to roam free.

There are two basic ways you can view a papal election: from without or from within—though in both cases, distance varies. The New York Times represents the furthest-out perspective, welcoming Benedict’s resignation and promptly rooting and editorializing for a more Sulzbergerian Catholic Church, with married lesbian priests blessing condoms at the altar. Less far-out are the great mass of non-Catholic American Protestants who view the white and black tufts of smoke from the Sistine Chapel with great curiosity.

Practicing Catholics have a more personal stake in the proceedings. What popes do can affect how, where, and even in what language we worship. The bishop of Rome is both the monarch of the church and something more personal and hard to explain. The pope is not CEO material. His title comes from the Greek pappas, the child’s word for father that could be translated as “Papa” or even, in the more popular vernacular, “Daddy.”

The abdication of a pope in theory presents a serious problem for Rome. The last pope who abdicated for non-political reasons, Celestine V, was imprisoned until death by his successor. To his credit, Benedict saw the spot his decision could put the Catholic Church in. He swore his “unconditional reverence and obedience” to the next bishop of Rome before the papal election and pledged to retire to a life of seclusion and prayer inside the walls of an old (though renovated) Vatican nunnery. The bear has chosen to confine himself to a cage of his own making.

If I had only one prayer for the future of the Catholic Church, it would be for our newly elected pope to let Benedict retire to his native Germany and continue his writing. Let him preside over Mass at a country church and churn out another volume of his memoirs or books on whatever topic his mind roams to in these twilight years. This allowance would hardly present the Vatican with any special crisis. During his papacy, Benedict wrote and published three books on the life of Jesus Christ. He made no claims of infallibility, but instead practically begged for people to have at the volumes, to come reason with him over the original reason for his hope—a hope that all Christians share in common.

A return to Germany is what Benedict would want, I believe. He never desired to move to Rome but was bound by oath to obey his pope. There he took on the thankless job of running the Congregation for the Doctrine of the Faith, which attempts to ensure that the Catholic Church’s theologians teach the Catholic faith. At a meeting in the 1980s with dissenting theologian Charlie Curran, Benedict’s deputy tried to explain the Church’s position on orthodoxy and theology. If he disagreed with the Vatican about a great number of things, the deputy said—and I’m paraphrasing—he would have to resign his position and live out his days as a country priest. Curran interrupted, calling that an insult to all country priests. Benedict sighed and said, I wish I could be a country priest! Our new pope could make that happen.