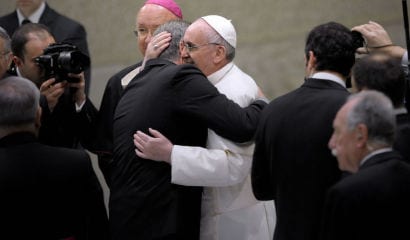 As the world gets to know Pope Francis, much of the early focus has been on his humility and simplicity. It’s a counter-intuitive tale of one of Latin America’s most significant bishops living in modest lodgings, cooking his own meals, and riding the crowded public transportation system in Buenos Aires. Even the small but telling gesture of paying his own hotel bill after the Vatican conclave drew media attention.

As a priest and archbishop he went into the poorest parts of Argentina to minister to the people. He said this in a 2008 homily: “Today the place for Christ is in the street… The Lord wants us like Him; with an open heart, roaming the streets of Buenos Aires and carrying his message!”

His vision of engagement with the poor runs deep. Pope Francis has spoken eloquently about the need to treat poor people as “subjects” and not mere “objects” of the state or the economy. In a presentation in September 2009 titled Las Deudas Sociales (Social Debts/Obligations), Cardinal Bergoglio said:

[W]e cannot truly respond to the challenge of eradicating exclusion and poverty if the poor continue to be objects, targets of action by the state and other organizations in a paternalistic and aid-based sense (asistencialista), instead of subjects, [in an environment] where the state and society create social conditions that promote and safeguard their rights and allow them to build their own destiny.

Here he identifies a core insight in how we should engage with the poor — as partners always remembering that they are the protagonists of their own development. Poor countries are not a place for experiments by government technocrats or international agencies. The main question is not how we can solve poverty, but instead, what are the foundations that allow people in the developing world to create prosperity for their families and communities so they can flourish as human beings.

Pope Francis has also emphasized the moral foundations of the economy. As Cardinal Archbishop of Buenos Aires, he spoke about the social nature of the economy and stressed that it must be grounded in morality that puts the human person, and not profit or economic growth, at the center:

The Church’s social doctrine holds that it is possible to live in authentic human relationships of friendship and sociability, in solidarity and reciprocity within economic activity, and not only outside it or “after” it. The economic sector is not ethically neutral, inhumane or antisocial by nature. It is an activity of man, and precisely because it is human, it has to be articulated and institutionalized ethically.

Here Francis underscores a truth too often obscured. People tend to think of economics in mathematical terms, divorced from ethical concerns. But this is a misunderstanding. Economics is the study of human interaction in the marketplace, and human beings are moral agents, thus economics has an intrinsic moral dimension. When economic decisions and policies are made in an ethical vacuum, when economic thinking is guided by the simplistic fiction of man as a radical individual or a utility maximizer (homo economicus), when the moral and psychological complexity of homo sapiens is thus eclipsed, it is bad for society in general, and acutely bad for the poor in particular.

It is also noteworthy how Francis highlighted the social nature of markets. We can be inclined to equate markets with images of pinstriped bankers on Wall Street smoking cigars, but markets are much more than that. Markets are networks of human relationships where people come together to meet needs and solve the problems nearest to them, and support their families and communities.

Thus, the goal of development as it’s understood by the Catholic Church is not simply boosting GDP but, as Benedict XVI and John Paul II emphasized, human flourishing — growth that allows people to live according to their dignity as persons created in the image of God, with an eternal destiny.

And this is the vision of Pope Francis, which rejects any path that reduces the poor to “objects” or “targets.”

(The translation of Francis’ works are by the Acton Institute.)