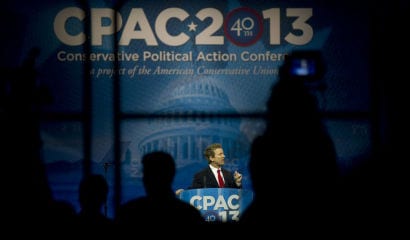 NATIONAL HARBOR, Maryland — The liberal media covered the 40th Conservative Political Action Conference (CPAC) pretty much like they cover everything else — deceitfully, with a partisan bias that is transparent to every honest and intelligent person who actually pays attention. On any subject of potential political significance, there is a yawning chasm between (a) actual events and (b) the deliberately dishonest portrayal of those events by the hired liars whose biggest fraud is their ludicrous pretense to objectivity. If the New York Times could find a way to put a liberal spin on sports, they certainly would: “Louisville Gets Top NCAA Seed; Women, Minorities Hardest Hit.”

Take, for example, the young comedian Steven Crowder. While serving as emcee on the Potomac Ballroom stage Saturday at CPAC, Crowder made a joke about actress (and, it is rumored, future Kentucky Senate candidate) Ashley Judd: “This just in, Ashley Judd just tweeted that purchasing Apple products is akin to rape — from her iPhone.” Which is pretty doggone funny if you know that, as Alex Pappas of the Daily Caller reported, Judd has claimed that the purchasers of the iPhone and other Apple products are “financing mass rape” by using minerals mined in the Democratic Republic of Congo. Judd has a penchant for throwing around “rape” in her far-left political rants. She has compared coal-mining in Kentucky to rape and, also, to genocide in Rwanda. Judd’s long history of such outrageous comments has Republicans laughing mirthfully at the prospect of the actress challenging Senate Majority Leader Mitch McConnell in Kentucky next year. But according to liberal journalists — whose cheerleading for Democrats is now so unapologetically blatant that it is taken for granted — the real outrage is that any Republican would criticize Judd’s lunatic utterances.

This is apparently why the Huffington Post decided to lie about Crowder’s joke. “Steven Crowder, a Fox News contributor who hosted part of Saturday’s activities at the 2013 Conservative Political Action Conference, made a questionable remark about actress and possible Kentucky Senate candidate Ashley Judd,” a post at the site described it, omitting both the factual context and the first part of the joke, quoting only Crowder’s follow-on comment: “What is this obsession with Ashley Judd and rape? It’s pretty unnerving.”

By tagging Crowder as a “Fox News contributor,” the writer of the HuffPo item signaled to liberal readers that the young comic is a hate-object. Evidently, the unnamed writer – the cowardly HuffPo liar didn’t put a byline on this cheap smear-job – didn’t trust his readers to have enough sense to decide whether or not Crowder’s joke was “questionable.” And, of course, there was the clever ju-jitsu reversal: The story is not about whether Ashley Judd’s rhetoric was too over-the-top for a Senate candidate — Judd’s own remarks aren’t even quoted — but rather whether a comedian’s joke about Judd is “questionable.”

Speaking of questions: Is there any joke that anyone could make about any Democrat that the Huffington Post would not deem “questionable”? Of course not. The entire mission of Arianna Huffington’s organization, which she sold for more than $300 million to AOL a few years ago, is to help Democrats and harm Republicans. Yet HuffPo is considered a “mainstream” news operation, while Fox News is consistently demonized by the same allegedly objective journalists who view HuffPo as entirely legitimate and respectable. This attitude is not merely liberal bias, it is pervasive dishonesty, an attempt to achieve a political outcome while purposefully misreporting the facts. AOL paid big bucks to buy Arianna’s cheap smear machine, and the well-paid hacks at NBC, CBS, ABC and CNN share the same commitment to delivering partisan propaganda. Therefore, while no one can obtain from “mainstream journalism” an accurate knowledge of Ashley Judd’s bizarre and outlandish opinions, the world must be instantly notified if a comedian cracks a joke about her at CPAC.

Pretty much everything about CPAC is “questionable” from the liberal media perspective. The very idea that thousands of people who disagree with liberalism would gather in one place to share their opinions — well, how dare they? Also, how dare those sneaky conservatives refuse to be a homogenous bunch of boring old white males? This is what really drives liberal nuts: Dr. Ben Carson, Ted Cruz, Sarah Palin, Allen West, Marco Rubio, Herman Cain, Mia Love — the CPAC stage featured plenty of people who aren’t quite the scapegoated right-wing stereotypes of liberal myth, and therefore they are the objects of particularly scornful media treatment. Popular conservative personalities who are either young, female, or not Caucasian are depicted in the media as kooky extremists or phony tokens for a movement which (as every HuffPo staffer knows) is a racist, sexist, homophobic plot by boring old rich fuddy-duddies.

Consider, for example, the winner of CPAC’s “Blogger of the Year” award, 24-year-old Katie Pavlich, author of a New York Times bestselling book about the “Fast and Furious” scandal, which the New York Times itself has desperately attempted to ignore. Rather than try to explain to their audiences how people who are supposed to be boring old fuddy-duddies manage instead to be brilliant young blondes, the liberal media just pretends that Katie Pavlich doesn’t exist. One imagines the producers and editors saying to one another, “Bestselling author? What bestselling author? I didn’t see any blonde girl up there on the stage. What are you talking about?”

This clever media trick of ignoring or endeavoring to discredit evidence that contradicts their liberal worldview completely warps the mainstream press coverage of CPAC every year. Liberal writers show up with their briefcases packed full of preconceptions and ready-made narrative templates. “Controversial Republican speaker provokes Republican controversy with controversial Republican remarks” is the standard format. Every trick of “gotcha” journalism is deployed in service of the media’s self-appointed mission to convey the idea that this yearly conference is a disreputable gathering of hate-filled fringe extremists. The difference between what actually happens at CPAC and what the liberal media reports is so vast that it seems the reporters were covering some entirely different event.

Having been the first journalist ever to describe CPAC accurately (“Mardi Gras for the Right,” Feb. 25, 2009), I understand that not even half the conference attendees are ever inside the main ballroom at any one time. There is serious business conducted at CPAC, and also a great deal of good, old-fashioned fun. Contrary to what the New York Times would have you believe, conservatives occasionally take time out from their usual business — hate, greed, and war — to laugh, sing, and dance. These occasions are regarded by liberal journalists as scandalous (“Controversy erupted at CPAC after it was learned that someone had two glasses of wine at dinner…”) and so there were no New York Times reporters at the seventh-floor suite where my Republican consultant friends John LaRosa and Brad Marston threw their “Unsustainable Bar Tab” party Friday night. Enough fun was had that hotel security finally shut it down, shortly after a multimillionaire campaign donor showed up at the invitation of a conservative mom from Texas.

Ah, those stereotypes! Boring old fuddy-duddies have all kinds of fun the liberal media never bother to report. And thank God for that.