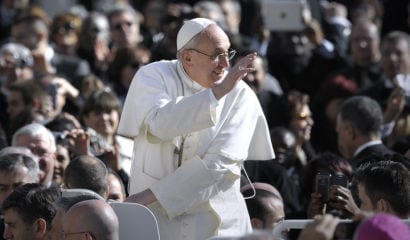 “I was overwhelmed by joy,” said Hans Kung, the dissenting European theologian, in a radio interview after the elevation of Pope Francis. “There is hope in this man,” gushed Kung, who predicted that Pope Francis will conform to the progressive interpretation of Vatican II and not follow the “line of the two popes from Poland and Germany.”

Leonardo Boff, one of the fathers of liberation theology, was quoted in the German press as saying that Francis is “more liberal” than commonly supposed.

Cardinal Roger Mahony took to Twitter to proclaim that the Church would move from high church to “low” church under Francis: “So long Papal ermine and fancy lace!”

The National Catholic Reporter approvingly quoted an unnamed Vatican diplomat as saying that “the Traditional Latin Mass brigade is finished.”

Esteban Paulon, president of the Argentine Federation of Lesbians, Gays, Bisexuals and Transsexuals, told the Washington Post that Pope Francis is “known for being moderate” and when “he came out strongly against gay marriage, he did it under pressure from the conservatives.” According to Sergio Rubin, whom the Post calls his authorized biographer, Pope Francis initially “urged his bishops to lobby for gay civil unions” as an alternative to gay marriage.

Benedict’s speech on Islam at the University of Regensburg didn’t sit well with Francis, according to the Telegraph in the United Kingdom. “These statements will serve to destroy in 20 seconds the careful construction of a relationship with Islam that Pope John Paul II built over the last twenty years,” it quotes him as saying.

Reports on his compliance with Benedict’s authorization of wider use of the Traditional Latin Mass are conflicting, but it is safe to say that he was less than thrilled by it. According to columnist E.J. Dionne, “an American bishop noted that the choice of Francis would not be greeted as a clear victory by conservatives,” since on “liturgical issues, he has opposed those who seek to roll back changes instituted by the Second Vatican Council.”

The picture that is forming of Pope Francis from all these bits and pieces is not that of a Ratzingerian restorationist but of a centrist prelate whose theological  views, tone, and emphases are characteristic of the post-Vatican II period. He is no Hans Kung. He is too pro-life and Marian for that level of theological conjecture. But it is a stretch to think that he shares Benedict’s rigorous critique of the crisis within the Church and the modern world. There is a reason why the progressive bloc within the previous conclave saw him as a desirable alternative to Ratzinger.

It was telling that Pope Francis in his first address from the papal window pointed to Cardinal Walter Kasper as a theologian whom he admires. Kasper is known for his hyper-ecumenism and taste for theological novelty.

“We are on good terms with the Archbishop of Canterbury and as much as we can we are helping him to keep the Anglican community together,” Kasper said in 2010, referring to a group of disaffected conservative Anglicans that wanted to join the Catholic Church. “It’s not our policy to bring that many Anglicans to Rome.”

Apparently Kasper and Francis agreed on this issue. Greg Venable, an Anglican prelate in Latin America, has told the press that the future pope “called me to have breakfast with him one morning and told me very clearly that the Ordinariate was quite unnecessary and that the Church needs us as Anglicans.”

Francis has the benevolent and winning personality of John Paul II and the humility of Benedict (though his took a less celebrated form), but his theological views mark him out as more centrist than his two predecessors. They attributed the collapse of Catholic institutions largely to a misapplication of Vatican II. Referring to the liturgy, Benedict spoke of the need for a “reform of the reform.” Francis appears happy enough with the first reform.

Francis’s papacy may not so much move the Church into the future as back to the recent past, circa 1970. Quarrels over the proper interpretation of Vatican II are more likely to explode than end. Emboldened liberal bishops under him may seek a reform of the “reform of the reform,” and they may push for a revisiting of settled moral, theological, and disciplinary stances. None of this repositioning will take place at the level of official teaching but at the murkier levels of tone, emphasis, and appointment.

That the Catholic left considers his election a shot in the arm can’t be chalked up simply to projection. There are enough nuances here to give them hope. They believe that this is their moment to try to undo the papacies of John Paul II and Benedict and return to the casual, informal, and spontaneous liturgical spirit of the 1970s while reviving a more poll-friendly situational ethics. Tweeted Mahony: “Don’t you feel the new energy, and being shared with one another?”

Hans Kung accepts that Pope Francis can’t adapt to “everything” in the modern world, but just hopes the general trajectory of his pontificate will be progressive. In Pope Francis’s apparent emphasis on individual conscience (he dispensed with the traditional spoken papal blessing when speaking to journalists last Saturday on the grounds that some of them weren’t Catholic or believers), toned-down morality, and Seamless Garment-style prioritizing of poverty, peace, and the environment, Kung and company see a pope with whom they can at long last “dialogue.”

The Founding Fathers established the First Amendment as a protection...Read More