More than 10,000 went through the metal detectors for a McCain-Palin appearance in Colorado Springs and the campaign had 15,000 RSVPs. 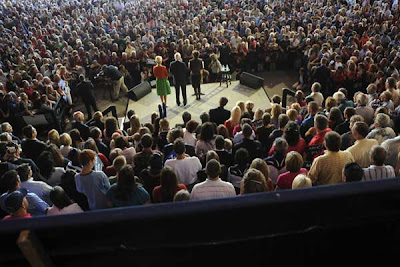 In just the second day of campaigning together, Republican Presidential nominee John McCain and his running mate, Sarah Palin, gave a command performance of their convention week speeches to a crowd of more than 10,000 here. . . . They began lining up as early as 5:30 a.m., even though doors for the event didn’t open until 9 a.m. By the time doors did open, traffic jammed for miles around the airport and the line of people waiting to get in wound for several hundred yards around large hangars.

Much more at the link, including quotes from a 2000 Al Gore volunteer who loves Palin so much she says she’s “never been inspired by anyone else like this except Bobby Kennedy.”

Patrick Poole says, “Last week in one fell swoop, John McCain completely changed the dynamic of this presidential election . . . For the first time in this campaign, Obama is playing catch-up.”

Robert Stacy McCain
Follow Their Stories:
View More
Robert Stacy McCain is the author of Sex Trouble: Essays on Radical Feminism and the War Against Human Nature. He blogs at TheOtherMcCain.com.
Most Popular
1
Hither and Yon
What’s Roberts Waiting On?
by Scott McKay