by Dov Fischer
President Joe Biden shakes hands with House Speaker Nancy Pelosi after delivering his State of the Union address to a joint session of Congress, Tuesday, March 1, 2022, in the House Chamber at the U.S. Capitol in Washington, D.C. (Official White House Photo by Adam Schultz) 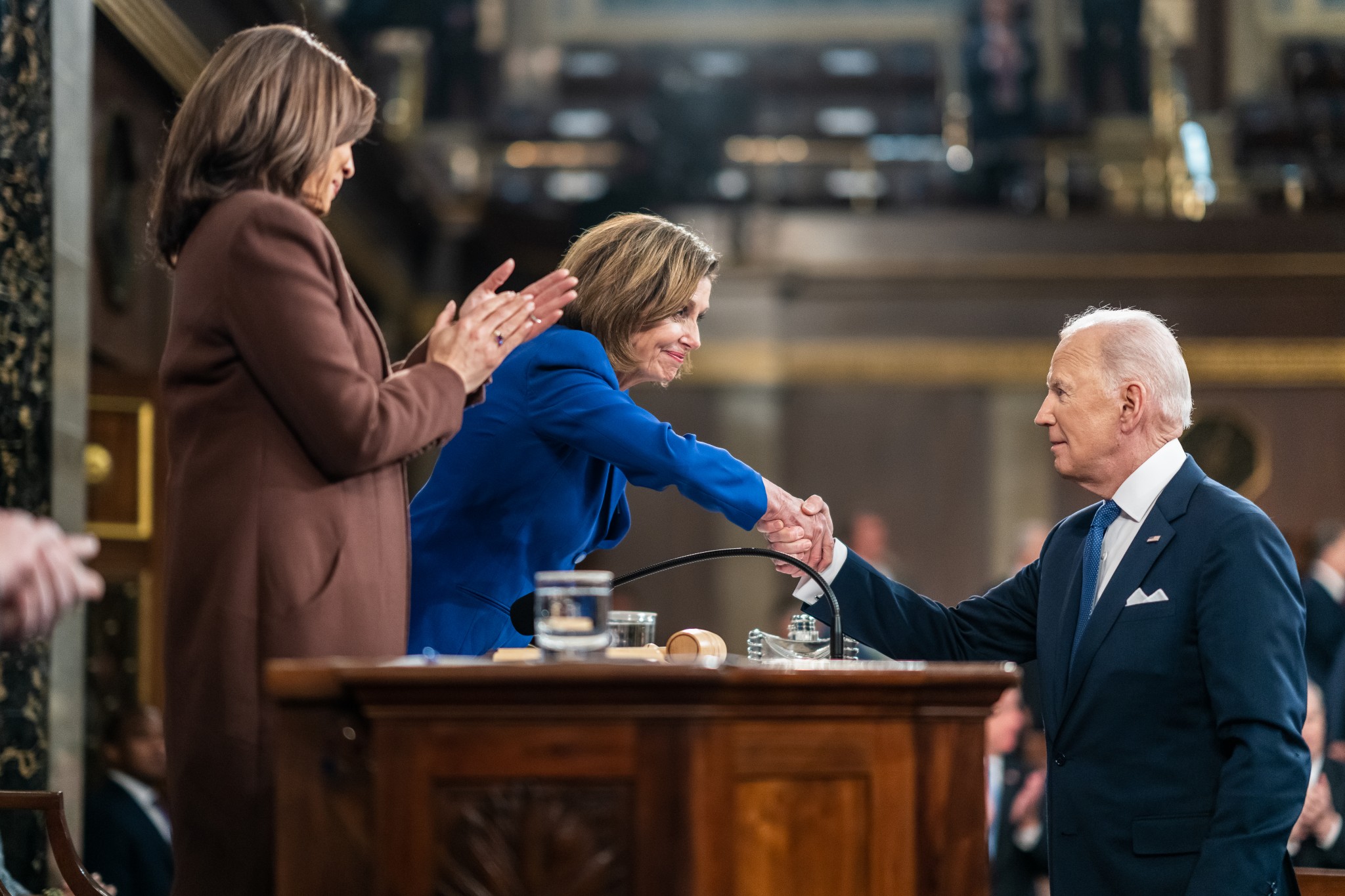 Biden, Pelosi, and AOC screwed up the economy, causing runaway inflation and skyrocketing prices at the gas pump. Democrats deny it. Here’s how the world works:

Democrats entered the White House on January 20, 2021, a day that will live in infamy. Biden immediately issued executive orders. He canceled the Keystone XL pipeline and issued severe green-climate regulations restricting exploring for oil and gas. No more Arctic National Wildlife Refuge drilling. He announced he is hell-bent on putting the oil-and-gas industry out of business. A week into his presidency, he issued Executive Order 14008: “Tackling the Climate Crisis at Home and Abroad — Putting the Climate Crisis at the Center of United States Foreign Policy and National Security.”

Soon, Pelosi and Biden orchestrated a $1.9 trillion climate-change and social-spending cash infusion into the economy: “The American Plan.” Looking back, Douglas Holtz-Eakin, former director of the Congressional Budget Office, has observed: “The American Rescue Plan was a major policy error that haunts us to this day. Biden signed it into law when the economy was growing 6.5%. There was no need to sign that.”

As trillions in paper money filter in, each person finds his bin laden with cash. People on unemployment receive more for staying home. We feel richer and eager to spend. We’re in the money.

I own a house. I ask $100,000. I have received five purchase offers, all below my asking price. As the “American Rescue Plan” is enacted, one couple among the five potential buyers discuss their bid privately and decide, now that they have more cash, to increase their offer. When they call, I share with them that all the others also now have upped their offers because everyone has more cash. I end up selling for $112,000.

My neighbors also are selling. They planned to ask for $100,000 as I initially did, but now learn I sold for $112,000, so they up their ask and sell for $117,000. Word spreads that “prices are rising, and buyers are paying. It’s a ‘Seller’s Market.’ The next seller tests whether he can get $125,000 and accepts $123,000. The next selling neighbor gets $126,000. This phenomenon spreads throughout the neighborhood, city, and country. Inasmuch as everyone now has more cash, and sellers — including you — always seek to profit, all prices go higher. The department store and fashion boutiques expect people will pay a bit more for clothes because they now have more cash. The hardware store. The stationery store. The supermarket. The coffee shop.

This explains partly how government cash infusions fuel inflation. When everyone has more cash, sellers know it — so they charge more. People either have to pay the increases or lose the opportunities to purchase because others with the added cash will pay the increases. Runaway inflation always accompanies runaway government “stimulus” spending.

Meanwhile, at work, employees demand new raises because they know employers have more cash. They successfully negotiate salary increases of five percent. However, by now inflation has spread throughout the economy at seven percent. Thus, although their prior $100 salary that sufficed to buy $100 of goods and services now leaves them “richer” with $105 to spend, the same goods and services now cost $107. Unlike the Trump years, when “real wages” rose faster than inflation — because those wage hikes were fueled by a rise in productivity and by reduced taxes and regulations — workers now actually fall behind despite a bigger payday.

As more dollars are printed, each dollar has less value. A single dollar that once could have bought a sandwich now requires two, so each dollar loses half its value. By now, pennies have lost all value. Nickels, pretty much too. These are the dimes that try men’s lives.

3. Tilting at Windmills and Outta Gas

I also own an oil and gas company. We have several government leases to explore for oil, but I still need permits to drill. I finally get a permit, but I still may not drill because new green-climate regulations stymie me. Furthermore, a green activist group gets an Obama judge’s injunction restraining my drilling. That litigation will tie me up for three years. When— if — I ever get my permit, defeat the injunction, overcome the regulations, and finally can drill, I must invest the enormous costs of drilling. After all that, my drilling comes up dry. I need to explore another parcel. “Better luck next time.” Maybe.

It is called “exploring” because it is not guaranteed. My bankers have gone bonkers, concerned about lending to me because Biden announces he will destroy my industry. Therefore, because lending to me suddenly entails increased risk, the interest rates on my bridge loans for drilling rise. I pass those increases to the consumer because, like everyone else, I am in business to feed and house my family, not to run a charity. That is why Bezos, Zuckerberg, Musk, and Buffet remain rich. Taxes on billionaires? They will pass them to me. Mom-and-Pop will pass them to you at the pump.

So Biden has me drilling less. Also, I need pipelines to transport any oil I find. But he is denying or restricting pipelines. My costs go higher as I seek transport alternatives, and I pass those costs to you, too.

Fortunately, we have devised an amazing new method to extract fossil fuels out of shale by hydraulic fracturing (“fracking”). We inject a mixture of water, chemicals, and sand at intense pressure into the ground to shatter bedrock formations, thereby releasing embedded oil and natural gas. Fracking means seriously reduced costs to obtain fossil fuel, dramatically less pollution here and throughout our planet as we extract it, and we have enough in our terrain to render us energy independent — with so much excess that we can emerge as the world’s largest net exporter of fossil fuels. We thus can lower our consumer prices, improve our trade balance, and replace Putin and Iran’s ayatollahs as Europe’s and Japan’s key energy sources. But we still need pipelines. And Biden’s regulations aim at replacing us with windmills and solar panels. All’s well does not end well when there are no wells.

Since Biden obstructs expansion, NATO countries continue paying Putin 35 million euros ($38 million) for his oil amid the Ukraine war crimes. Despite “sanctions,” they fund his war and Iran’s terror, supporting Hamas in Gaza and Hezbollah in South Lebanon. That money buys murderous rockets and missiles, builds underground terror tunnels, finances Houthi rebels in Yemen at war with Saudi Arabia, and buys the IEDs (improvised explosive devices) that blow off the legs and faces of American soldiers in Iraq. Our Green New Deal pays for that. Contented cows.

As we reduce our supplies by over-regulating, we have to import energy from dictatorships like Venezuela and Arab Islamic sheikhdoms. We ultimately need to raid our emergency National Petroleum Preserve, our life-or-death supply if ever facing perilous shortages amid world war. We deplete one-third of the emergency supply — say, 180 million barrels — for the self-imposed shortage we have foisted onto ourselves.

Thus do Biden’s helter-skelter green-energy policies cause prices to rise. Each of 10 “oil buyers” needs five gallons apiece, and each is willing to pay $1 per gallon to meet needs. The seller aims to come home with $50 gross. However, Biden-Pelosi-AOC policies now have raised oil prices, as per above. Three of the five oil buyers cannot afford the increases, but they have no choice. They cannot operate without oil.  One files for bankruptcy. As a result, all companies to which he owes money (his “creditors”) will get zero. Some of those companies were relying on his payments for themselves to remain economically afloat. Now, however, with his debt discharges, they also must file for bankruptcy soon after. And those discharges lead to more bankruptcies.

The other two, though they cannot afford increases, pay as demanded anyway. They have no choice. They pass along their increased costs to you. One of the two companies produces a great or vital product, and you willingly pay their new higher price. The other’s product is mediocre, not worth the increase, so you decide to stop buying it. In time, they file for bankruptcy, too.

The remaining two companies pay the increases; they can afford it. But the seller, meantime, still needs to bring home $50. Actually, with inflation now impacting, he needs $54 to buy what used to cost him $50. Two of his five buyers are gone; they went bankrupt. So he needs to recoup $54 from his remaining three buyers. He has buyers now for only 30 gallons, not 50, because his buyers still need ten gallons each. Consequently, he now must charge $1.80 a gallon, no longer one dollar. Those costs and increases ultimately get passed along to you at the pump. Blame Putin for war crimes but not for pump shock.

AOC majored in economics at Boston University where she graduated with honors. Must have missed class that day.